A tale of re-discovery

In the 1850s, the geologist Ferdinand Hayden crossed the Nebraska Sandhills on an expedition to map uncharted territory and chronicle its natural resources. He discovered a species new to science, a pale lavender flower on a thick stalk that would become known as blowout penstemon. An 1877 Hayden Expedition collected the same species of plant, and for the longest time, scientists assumed this later collection also came from Nebraska. 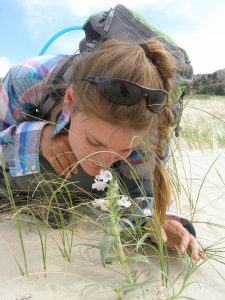 One hundred and ten years later, in 1987, the US Fish and Wildlife Service listed the blowout penstemon as endangered under the Endangered Species Act. Then botanists knew the plant to live only in Nebraska, where its blowout habitat was scarce and declining. Blowouts are bowl-shaped depressions scoured out of sand dunes by wind, and many had vanished in Nebraska.

In 1996, Bureau of Land Management biologist Frank Blomquist stood on top of a towering sand slope among blowouts, northeast of Rawlins, Wyoming, and photographed a penstemon that he had never seen before. A few years later, a team returned to obtain specimens and send them off to experts, who confirmed that it was blowout penstemon. Meanwhile, Robert Dorn, author of Vascular Plants of Wyoming among other texts and expert on early explorers, examined the 1877 Hayden Expedition journals’ description of the blowout penstemon collection location. The journals described towering sand slopes and referred to vague place names, which Dorn deciphered as a route between modern-day Casper and Rawlins. Thanks to Dorn’s detective work, Blomquist’s discovery of blowout penstemon in Wyoming is widely accepted as a re-discovery, 119 years later. 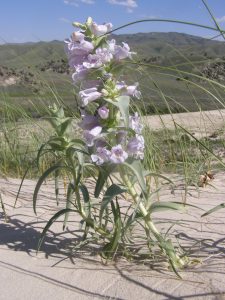 The blowout penstemon (Penstemon haydenii) is one of the few penstemon species that has fragrance. Photo by Bonnie Heidel

Under the ESA, plants are always designated as endangered or threatened throughout their range, so blowout penstemon became Wyoming’s first—and remains its only—endangered plant species. Since 2000, Wyoming Natural Diversity Database botanists have surveyed blowout penstemon to map its distribution and monitor its population trends, while others studied its pollination and seed biology. We now know it occupies multiple blowouts in three areas of the Ferris Dunes. Studies have revealed its elegant pollination system and other adaptations to survive and thrive in the punishing environment of blowing sands.

The BLM has funded studies of the plant and designated the penstemon’s habitat on BLM lands in Wyoming as an Area of Critical Environmental Concern. The USFWS is currently assessing blowout penstemon data from the two states to determine its conservation status. While we await the conclusions of the assessment, we have a new chapter in the blowout penstemon discoveries as written by Blomquist and collaborating botanists. New data on Wyoming populations of blowout penstemon will contribute to the species’ conservation.