What’s good for sage grouse is good for landowners

I met Peter John Camino in the lobby of the Johnson County Public Library in Buffalo, Wyoming. A past president of the Wyoming Wool Growers Association, member of the Wyoming Agriculture Hall of Fame, and third-generation sheep rancher with Basque roots—his grandfather left Spain in the early 1900s to herd sheep in Wyoming—he and his family have been in the sheep business for over a century. He carried a rolled-up map of his property, which he spread out across the table. “We had just one spot for water in this main pasture,” he says, pointing to a creek bottom on the map. “The sheep were just hammering the grass in that one area.” 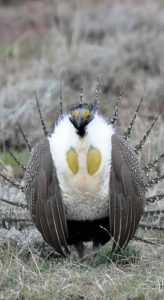 At the time his ranch outside Buffalo was divided into just three pastures, only two of which had any water. Overgrazing was a huge problem. Still, Camino told me, he thought things were working fine, and even if he’d realized he needed help to improve his pastures, he would have been reluctant to accept it. So when a government employee showed up asking him to join a federally funded conservation program meant to improve range conditions for livestock in the name of saving a treasured wild grouse, Camino did not immediately take to the idea.

“The North American [greater sage grouse] population was cratering. And it was a big cratering,” says Bert Jellison, a Wyoming Game and Fish Department Habitat Biologist in the Sheridan region at the time. Greater sage grouse (Centrocercus urophasianus) populations in the West used to be in the millions, but development in the form of growing cities, natural resource extraction, and, to a lesser extent, farms and ranches, wreaked havoc on sage grouse. By 2013, sage grouse numbers had sunk to fewer than 500,000. In 2010, the US Fish and Wildlife Service decided that the bird was in sufficient trouble to merit consideration for an endangered species listing, which would mean more government intrusion and regulations throughout the bird’s sagebrush steppe habitat. The threat of a listing kicked off a race to protect the greater sage grouse and to prove the species didn’t need federal protection. Over the next few years, the US Department of Agriculture invested more than $400 million in conservation efforts across the West.

Jellison was charged with protecting sage grouse habitats in Johnson County, and, since the county was mostly private land, he needed to get ranchers like Camino on board. He aimed to do that in part by directing federal sage grouse money toward habitat restoration on private ranches in the county. The sage grouse requires specific areas, called leks, to perform mating rituals. It was these leks that Jellison sought to protect, which made Camino a perfect candidate for this project; his property was located right in a core lekking area.

Jellison had read about a successful grouse project at the Deseret Ranch, in Utah—the first of its kind, as far as he could tell. The ranch used mechanical treatments and livestock rotation systems to enhance sage grouse habitat. The Deseret grouse population exploded even as the ranch doubled its livestock numbers. “That told me that you can manage livestock and improve the range to benefit both livestock and sage grouse,” says Jellison. “I wanted to show how a group of ranchers can choose to dictate their own destiny when it comes to conserving a species.” But could he replicate such success in Johnson County?

When Gonzales first approached Camino about joining the project, Camino had some reservations. A lot of government programs he’d seen in the past came with too many stipulations or asked for too big of a cost-share. The Lake DeSmet Conservation District’s Sage Grouse Program, however, paid 100 percent of costs for the improvements the best management practices would suggest. There was no cost share. Gonzales explained the kinds of projects the program would cover, such as new fences and water lines. Such projects would improve the rangeland for both sage grouse and livestock, and enhance the value of Camino’s land as well, Gonzales said. Eventually Gonzales warmed Camino up to the idea, and two years after their first discussion, the seasoned sheep rancher agreed to give the program a try.

“We found out we weren’t as efficient as we thought we were,” he says. “You fall into a groove and you don’t like change. You think it’s working, and sometimes it’s not.”

With the Sage Grouse Program support, Camino divided his three pastures into nine. He also added new water lines to better disperse the sheep over the pastures. “We reduced the pastures acre-wise to where we could rotate from pasture to pasture instead of hammering that main one,” he says. With the new fences and the waterlines, Camino could better utilize the entire property, and native grasses started to come back.

“It was a good situation for us all the way around,” says Camino. Since joining the Sage Grouse Program, Camino says with nine pastures instead of three, his sheep are healthier than ever and his ewes produce more lambs.

In the end, the Johnson County Sage Grouse Program ran from 2004 to 2011 and included 24 landowners, 340,000 acres, and a budget of over $3 million. Each participant got a customized grazing plan. The program covered the costs of adjusting pasture layouts, building new fence, repositioning waterlines, and aerating pastures. The Lake DeSmet Conservation District planted over 17,000 pounds of shrub and forb seed, and installed six solar-powered water systems.

In 2008, the US Forest Service and the Natural Resources Conservation Service presented Nikki Lohse with the prestigious Two Chiefs Partnership Award for her leadership and hard work. Lohse was one of only four recipients that year.

Roy Roath, one of the project’s consultants and a Colorado State University range extension specialist who played a critical role in communicating the financial benefits of switching to best management practices, grew up in the ranching business. “As far as stretching a dollar in the district,” he says, “Lake DeSmet stretched it like a rubber band and shot it out of the park.”

How did this all work out for the grouse? In 2015, in part due to this and hundreds of similar collaborative efforts throughout the West, the US Fish and Wildlife Service decided not to list the sage grouse as an endangered species. Landowners breathed a sigh of relief. In Johnson County, booming natural gas development confounded population monitoring, but Camino has noticed sage grouse coming back. The other day he saw a hen and eight or nine chicks walking out in the road. “We see more birds, more little ones, and birds through the summer,” he says. “This past year there were a lot more grouse. We’ve had one hell of a spring, and the grass is clear to your belly.”

Maria Anderson is from Montana. Her fiction has been published in the Missouri Review, the Iowa Review, the Atlas Review, and Big Lucks. She received her MFA at the University of Wyoming, and she’s an editor at Essay Press. Find her on Twitter.