A meditation on extinction

No more northern white rhinos live in the wild, and the three in captivity are too old to reproduce. Singapore’s Ridley’s stick insect went extinct. The Guam reed warbler, the Santa Lucia skink, the Costa Rican golden toad. Scientists have named this period the Anthropocene, the geologic era in which human beings are causing the sixth mass global extinction. Today, species vanish 1,000 to 10,000 times faster than natural extinction rates. Of the 2 to 100 million species on the planet, we lose thousands, maybe tens of thousands, each year. Lives are blinking out around us at an unprecedented rate. 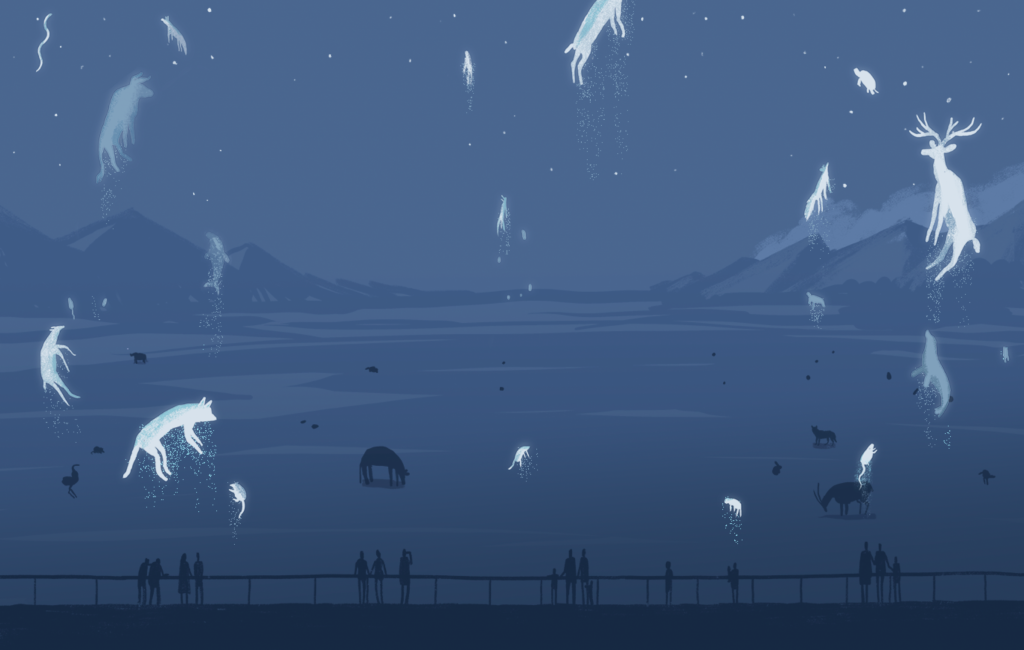 These extinctions happen so fast and so quietly, that we fail to notice. There is no collective narrative about the Anthropocene; the loss is so overwhelming that we seem incapable of addressing it. Extinction transforms the biosphere more than any other phenomenon in this era, and yet due to its invisibility, we don’t know how to think about it. The scale of each loss is so blinding that many of us simply look away.

Perhaps we can better grasp extinction of species by thinking about extinctions in our own experiences. Things that aren’t plants or animals, but constructs and concepts and softly held ways of life slip away as well. Consider: Anonymity. Silence. Awareness. Our sense of connection to the natural world. Without checking your iPhone, do you know what phase the moon will be in tonight? When is the last time you moved anonymously through a landscape? As you read this, do you hear ambient noise? Does it matter?

Studies suggest that the extinction of silence, at least, matters very much. In wild areas where noise persists, animal numbers consistently drop. The endangered northern spotted owl in the Hoh Rainforest of Washington state neglects its young and even ejects eggs and juveniles from the nest when it hears unnatural noises like passing trucks or electric tools. Noise reduces the density and slows reproductive activity of animals including reptiles, marine mammals, and birds by a third or more. Humans perceive jarring noises as danger warnings, triggering physiological stress responses—elevated blood pressure, higher heart rates, high stress hormones—even in deep sleep. Long-term exposure leads to lasting cardiovascular problems. The extinction of silence is literally hurting our hearts.

Darkness is disappearing, too. At the start of the nineteenth century, the Milky Way was clearly visible above the streets of New York City; today an estimated 80 percent of the world’s population lives under what the International Dark Sky Association has named “skyglow.” In its 2016 study, the association estimated that exposure to artificial light has already altered the melatonin, serotonin, and dopamine levels in our bodies. Our light pollution affects animals just as badly. For billions of years, organisms adapted to respond to the rhythms of the sun. Today scientists agree that the extinguishing of darkness alters their migration patterns, hunting habits, and even reproduction.

It is hard to hold space in our minds for these losses—how many there are, how much they matter, how we are just plankton in the tide. We’ll likely never fully understand extinction, given the limitations in our understanding of living species. An example: as recently as 1980, scientists surveyed just 19 trees in a tropical forest in Panama and found 1,200 beetle species, of which 80 percent were previously unknown to science. “Surprisingly, scientists have a better understanding of how many stars there are in the galaxy than how many species there are on Earth,” the World Resources Institute wrote of the discovery.

As we struggle to understand the Anthropocene, we might look to the physicist’s definition of extinction: the reduction in the intensity of light as it passes through an object, due to absorption, reflection, and scattering. Every atom that made each Ridley’s stick insect and each golden toad is still present on this earth, but rearranged into new forms. Silence is slipping away. Darkness is dwindling. What will fill the space each loss leaves behind?

The sixth extinction is upon us as surely as a slowly spilling sunset. We do not have the power to reverse the sun’s trajectory toward the horizon. So we simply watch, and we try to learn, to understand, to tell the stories of the vanishing creatures. Some we fight to save. A few we do save. Paul Hawking wrote: “Extinction is silent, and it has no voice other than our own.”