Research shows the promise and peril of a new material

Scientist Rob Ament and then-grad student Matthew Bell were on a quest. In the Dutch city of Rotterdam for a conference on ecology and transportation in 2018, they wanted to find a pedestrian bridge made of an entirely new material-fiber reinforced polymer, or FRP, plastic. They had hopes of putting it to use on a bigger scale for wildlife back in the United States. But after being stood up by the company who made it, the two Montana researchers were at a loss.

“So we went to our hotel and we talked to the woman at the front desk,” said Ament, the Western Transportation Institute’s road ecology program manager. “We said, ‘This is crazy, we’re looking for these plastic bridges.’ We showed her a picture that we’d seen on the website of this company. And she goes, ‘I know where that is.’” 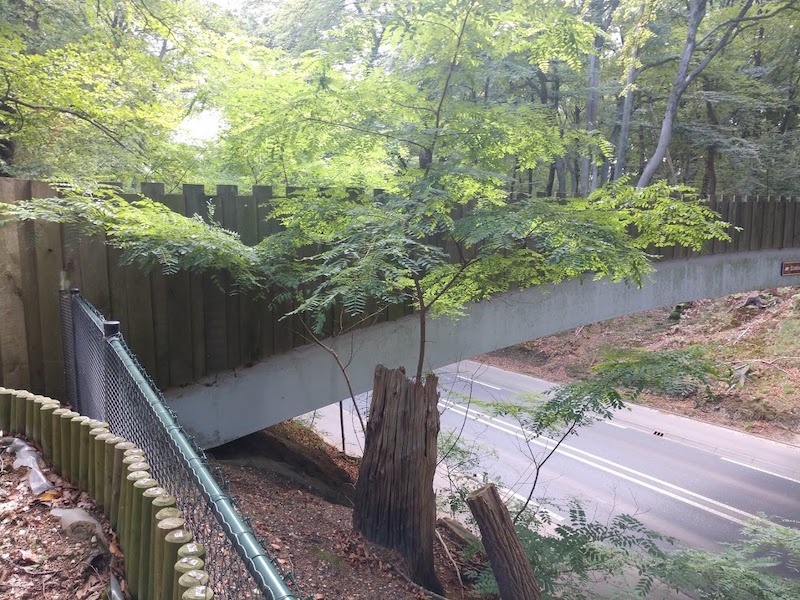 She pulled out a map. Bingo.

While in the Netherlands, Ament and Bell also managed to find the world’s only wildlife overpass made of FRP. They think the material has the potential to solve some of the problems of traditional wildlife crossings, which are designed to shepherd animals over or under busy roads. Wildlife crossings in North America are usually large concrete structures, sometimes with foliage on top, spanning highways. This makes them expensive, permanent, and slow to build, and requires carbon-intensive concrete and other materials.

People like Ament are rethinking what goes into the crossing structures. The potential for lower maintenance costs and quicker construction could solve some of these problems and get more crossings on the landscape.

“We know our highways are barriers and we didn’t design them with landscape connectivity and wildlife movement in mind,” Ament said. “They just weren’t built that way and now we’re retrofitting to reconnect the landscape.” That retrofitting is increasing in pace. The first wildlife bridge in the US was built in Utah in the 1970s. Today, Banff National Park in British Columbia boasts almost 40 underpasses and six overpasses and new ones are popping up every year over highways all across the West.

Scientists want to make wildlife crossing structures cheaper, more versatile, and easier to build and maintain, and combining resources can help. Eleven states, Parks Canada, and the Canadian province of Ontario collectively put up $1.2 million under a US Department of Transportation program to improve rural travel, which includes helping drivers avoid hitting wildlife. The Western Transportation Institute, the country’s largest university-based research center focused on rural transportation issues based at Montana State University, won the funding with their creative proposal. Wildlife overpasses and underpasses with fencing are fairly well studied, so Ament and his team took a different approach, plunging into FRP research. Who makes FRP bridges, how could they be designed to work at a bigger scale, what are their strengths and weaknesses?

“The question isn’t, ‘Do they work?’ but, ‘Can we do them with new materials with the idea of trying to bring the cost down,’” Ament said. Bridges have traditionally been made of the same three materials—steel, concrete, and wood—for hundreds of years. “It hasn’t ever changed,” Ament said. “Isn’t that amazing? We’re just starting to introduce our fourth material.”

Six areas were nominated as sites to build out the solution to the funded challenge. California’s two-lane US 97 in Siskiyou County was ultimately chosen. A site hasn’t been finalized yet, but it’ll likely be on a ridge above Grass Lake. Project proposals state that Caltrans maintenance staff remove six or seven animal carcasses monthly from the highway in this stretch and between 2015 and 2019, California Highway Patrol recorded that vehicles struck 68 mule deer and five elk. Numbers are likely higher, since not all incidents are reported.

Now a team of engineers, wildlife biologists, and road ecology gurus from California to Montana are drawing up plans for an FRP overcrossing there, which will be the first bridge of its kind in North America. They’ll also design accoutrements, like fences and sound barriers, once a site is finalized. They hope doing time-intensive research and consultation now will work as a blueprint to expedite the process in the future and show other clients that the material can work in practice and not just on paper. Caltrans has already expressed interest in a second structure if the process goes smoothly.

“The idea of someone trying to do something new and different, the potential uses of something like that, interested us from day one,” said Wesley Stroud, a senior environmental planner for Caltrans.

The challenge now is scaling up FRPs for the bigger wildlife seen in the western United States. In the Netherlands, “they’re looking at hedgehogs and badgers, and we’re looking at elk and wolves,” said Bell, now a research associate at the Western Transportation Institute and the lead materials researcher on this project. “They don’t compare.” The Northern California bridge will need to be between 30 and 50 meters wide to convince elk, skittish in tight spaces, that it’s safe enough to cross. Bell is working with different companies and materials to determine the best fit for the project; structural engineer Damon Fick is making sure the eventual bridge doesn’t collapse. 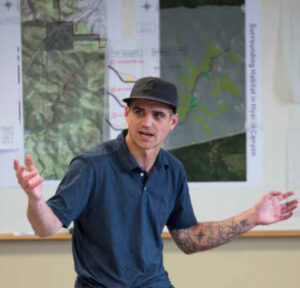 FRPs are made using materials like crude oil, natural gas, chlorine, nitrogen, glass, and sometimes recycled plastics. These materials can’t be welded like steel, so the researchers are considering different bolted connections to help the bridge be as wide as it needs to be. Fick, an assistant professor of civil engineering at Montana State University, said FRPs bring about a unique set of engineering concerns he’s excited to tackle. One that’s on his radar is “slouching,” which can happen with composite materials that are less stiff than steel or concrete. “The bridge won’t necessarily fall down,” Fick said. “But it’s a cosmetic or a serviceability issue. Nobody wants to walk underneath a beam that looks like it’s sagging.” Selecting the right manufacturer of FRP and designing it properly will help solve this problem. While there’s inherent risk and logistical challenges of using something new and trying to scale it up, the attitude across state lines is gung-ho.

Researchers think there are strong reasons this material is worth pursuing. They’ve poured over case studies that show the average FRP bridge is half the weight of a steel bridge with the same strength and is five times lighter than its concrete equivalent. Smaller bridges—not this particular project over US 97—could be assembled like Legos, with precast molded blocks being plopped into place. This could theoretically mean quicker construction with fewer traffic detours and re-routes as well as the possibility for bridges that aren’t as long or wide as the California design to be picked up and moved if migration routes change. And FRP materials can last four times as long as, say, wildlife fencing made of wood.

“Generally speaking, FRPs are an extremely strong material, they make construction a lot easier, they last longer, there’s little maintenance required,” Bell said. “Depending on the way your materials are used, they can even be fire, impact, or UV resistant.”

The first few FRP bridges likely won’t be too much different in overall cost, but the hope is that in time costs will come down when less preliminary research, materials reconnaissance, and design work is needed to lay the foundation. Avoiding sticker shock is a strong motivator: a recent price tag for an overpass near Banff, Alberta, clocked in around $4 million and average costs for wildlife crossing construction range from there up to $10 million.

Potential future savings include lower construction method costs, less time to complete a structure, and less maintenance compared to conventional methods. While wildlife crossings with the material are unchartered territory, Bell said pedestrian bridges using FRPs are bid against conventional methods and come up the same price or cheaper. For now, some structural components of the bridge in California—like fence posts or sound barriers—could be fully FRP. Others might be a hybrid of FRP on the outside and concrete on the inside to leverage the beneficial properties of each.

The project is in its design phase. Caltrans is looking for funding partners to pay for construction. If all goes according to plan, construction will occur in the summer of 2023. While there’s still a lot to learn about how FRP bridges will work for North America’s larger mammals, the innovative material could change the landscape for wildlife connectivity.

“It needs to be looked at as a whole conservation goal as well as an economically sustainable goal when it comes to what we’re trying to do,” Bell said. “It could definitely be the future of wildlife crossings.”

Kylie Mohr is an award-winning reporter based in Montana who recently earned a master’s degree in environmental journalism. She is currently an intern at High Country News. Learn more about her work at kyliemohr.com.