Native bees are forgotten in the clamor to save exotic pollinators

Christy Bell rifled through a series of shallow drawers lining the walls of a dark, windowless lab. She opened drawer after drawer, pointing out different species, speaking their scientific names rapidly. 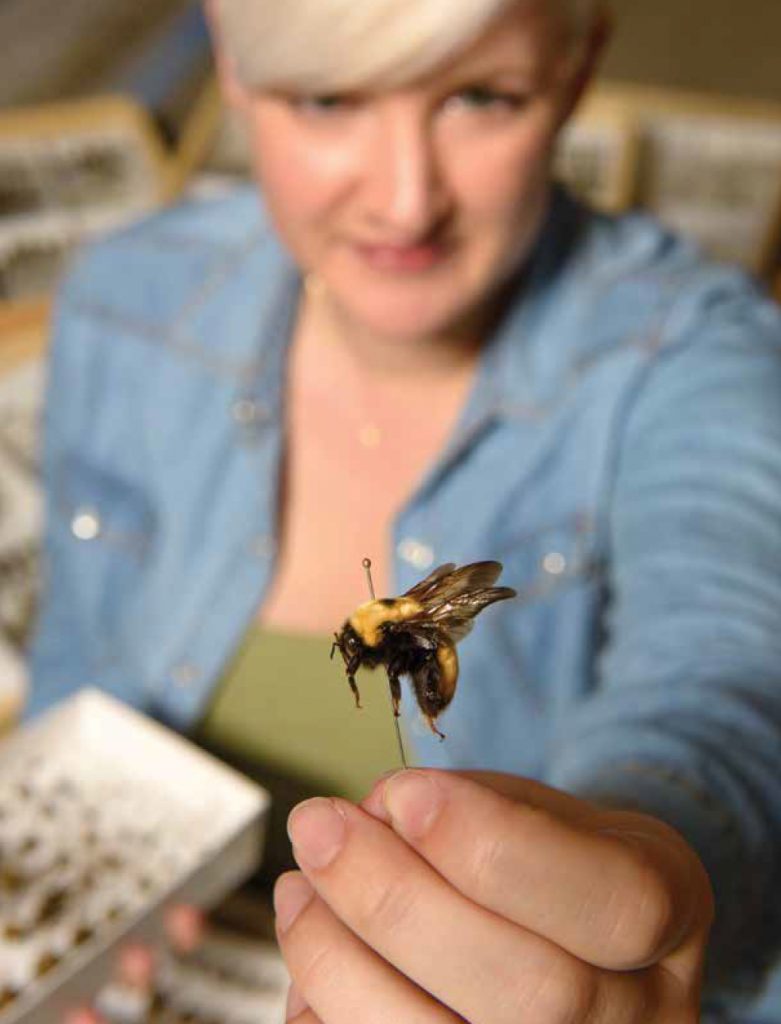 Christy Bell holds up one of the thousands of bees she has collected across Wyoming in her effort to better understand native pollinators. (UW photo.)

“Halictid bees,” she said. “You might have heard them called sweat bees.” Her finger swept a layer of dust from the protective glass as she traced a row of green insects. “That cuckoo bee over there is also a sweat bee, but she parasitizes other nests.” She pointed to another row, her hand already on the next drawer. “Right here are mining bees from genus Andrena.”

We hovered over the pinned specimens. It was as if she were digging through a box of family photos, pointing out close friends, old memories. There were thousands of bees. I tried to keep up.

Bell can recognize more bees by their scientific name than I can put names to faces in my own extended family. She doesn’t need a field guide to do it. “And this is just Wyoming,” she said. “Wheatland and Torrington, these are from the Black Hills, here’s from Tetons, Yellowstone, Lander, Big Horn Basin.”

Wyoming is home to an estimated 700 to 800 native bee species. In North America, scientists have identified 4,000. Globally, the number of species is around 20,000. But of the hundreds of species in the state and thousands in the world, Bell explained that we still don’t know the life stories of the overwhelming majority. And it’s hard to protect what you don’t know.

She gestured to several long rows of bees with furry white bottoms. “From here to here are Bombus occidentalis. Those used to be one of the most common bumblebees, but now they are really rare. Up for petition to be on the endangered species list.”

Bombus occidentalis, the western bumblebee, is not alone. Thousands of bee species—essential to the pollination of both native and crop plants—are in similar trouble. But while researchers are aware that bees are in dire need of protection, the public conservation effort has centered almost entirely around one nonnative species: the European honeybee (Apis mellifera).

Most people know this bee. It lives in a geometric above-ground hive, socializes with a waggle dance, and produces a surplus of honey. But most people don’t know it’s not native. Honeybees were introduced to North America by European settlers. “They are essentially managed livestock,” Bell explained.

Over the last decade, problems facing honeybees have gotten a lot of press. But they are just one of many bee species in decline. The trouble, Bell told me, is getting people to understand there are a lot of different kinds of bees and they all contribute to the work of pollination differently. What works to protect honeybees, won’t protect all bees.

But understanding how to protect all bees is challenging. A lot of scientists research bees in the lab, but very few actually study them out in the field like Bell does. Last year, she became the first person to survey the entire state for native bumblebees. Over two summers, she drove 20,000 miles across Wyoming, collecting bees. That’s the equivalent of seven cross-country road trips without ever crossing state lines. “I’m a notorious bee murderer,” she said. “I think I killed like 3,700 bumblebees in those two summers. For the sake of science,” she clarified quickly with a nervous laugh. Bell told me to join her in the field the next day. “I’ll show you what bees are really like—while they’re still alive,” she said with a smile.

The next afternoon, I met Bell near a pollinator garden at the University of Wyoming. Seven researchers trailed behind her in a straight line, grasping long wooden handles with mesh nets gathered into pointy ends. If there had been more wind, the mesh might have flapped behind them, like triangular flags held by scientists on a pollinator parade.

Bell spotted something flying and placed her net over a lupine the way you might set the mouth of a jar over a crawling insect. “They pretty much always fly up,” she said as the bee headed toward the top of the mesh. She swished her net through the air to fold it over itself, then eased her bare hand into the buzzing net. She slipped the bee into a cylindrical vial about the size of a film canister. Inside, the captured bumblebee tried desperately to escape, its six legs slipping against the sides of the plastic. “This one is a Bombus huntii queen,” she confirmed, examining it more closely.

Unlike the familiar story of hive-dwelling honeybees, the vast majority of bees, like Bombus huntii, live underground and lead solitary lives, the details of which remain elusive to scientists. In late fall, Bell explained, most bumblebees die. The species survives by a queen who mates and crawls underground to sleep off the winter with a belly full of eggs. In the spring, she wakes and searches for suitable real estate to make a new nest and raise her young—usually a small hole or old rodent burrow in the ground.

Like these bumblebees, thousands of other species have evolved in North America to carry out a range of specialized pollination tasks. Some bees—like the native Perdita—can crawl deep inside tiny wildflowers honeybees wouldn’t touch. And certain crops—like tomatoes and peppers—require buzz-pollination, a process where native bumblebees vibrate their bodies at a high enough frequency to shake pollen from one flower to another. Without native bees, much of this specialized work of pollination would go unfinished.

Researchers like Bell are still in the early stages of understanding native bees and their role in certain habitats. But as more and more researchers sample regions for native bees, they are discovering a similar story: There are far fewer than before.

Bell thinks part of the reason we don’t hear more about native bees is we just don’t know much about them. “But all native bees are important, even if we don’t understand exactly what they do,” Bell said. “We’re not comfortable saying we don’t know, but honestly that’s what science is about.”

Honeybees are a fine pollinator, she explained. They just aren’t the only one. And in some cases, their presence can cause more harm than good. For example, when a managed honeybee hive—which can include anywhere from 10,000 to 60,000 bees—is placed in an area where pollen is already scarce, native bees can be outcompeted by sheer number alone. And like anything raised in close quarters, pathogens can spread before amateur beekeepers are aware their hive has been compromised. Those sick bees can then spread diseases to native bee populations by pollinating the nearby flowers. It’s something like touching a tissue someone else has sneezed on.

One way people can help native bees would be to get rid of lawns. “They’re a huge waste. They don’t provide pollen and just take up space and water resources. And people sometimes spray them with chemicals,” Bell said. “Plant native wildflowers instead. Bumblebees love delphinium, lupine, hollyhocks.”

Ignoring gardening altogether can be a big help to bees, she explained. Nearly 75 percent of native bee species are ground nesters and a lot of them require patchy, bare earth to burrow. “It’s ugly, but leave some bald areas on your lawn,” Bell said. “And don’t clean up yard waste right away. Hold off on landscaping until early June when there’s been a couple weeks of warm weather.” Queen bees can overwinter in old hollyhock stems, she explained.

But those are small steps in the scope of a far-reaching problem. Without more researchers like Bell who study native bees in their natural habitat—and the accompanying funding to support that research—we risk losing species faster than we can understand their place in the world.

That evening, after I put away my net in the lab, I waded through a familiar tangle of last season’s hollyhock stems in my backyard. The ground was patchy and bald in places. Not much was blooming. Before, I would have said it didn’t look like a promising place to find bees.

But when I knelt close to the dirt, I saw metallic blue mason bees and reddish-brown Andrena mining bees. I saw green halictid sweat bees and a lone Bombus huntii queen with her orange striped bottom and yellow face. I saw a patch of bare earth that was alive in a way I’d never noticed before.

Sally Leaf is a nonfiction writer pursuing a master of fine arts at the University of Wyoming. Her current book explores loss on a personal and global scale. Drawing on the sudden death of her father and the sharp decline in the migratory monarch butterfly population, she hopes to encourage conversation about what it means to lose a person (or a species) forever.