To Kill or Not to Kill?

Managing charismatic ungulates in the Tetons

The first time Michael Whitfield saw bighorn sheep in the high country he stood on a ridgeline in the shadow of the Teton Range and watched a group grazing along a plateau. As he snuck up to get a closer look, “the sheep…disappeared right into the cliffs…and then they were gone,” he says. Whitfield spent most summers in the 1980s chasing these high-country ungulates across cliff faces through harsh weather for his graduate research. At the time, nobody knew much about the Teton sheep except that they seemed to be declining fast.

A mountain goat peers down from a cliff in the Snake River Range, where the animals were introduced for hunting in the 1960s. (Photo by Mark Gocke, Wyoming Game and Fish Department.)

Over years of field work in the high country, Whitfield discovered a small, isolated population of bighorn sheep, surviving off very little food. Bighorn sheep were not the only mountain climbing ungulate that Whitfield observed in the Tetons––he also found a few shaggy-bearded mountain goats occasionally moving in and out of the range. Whitfield warned in his graduate thesis that if mountain goat numbers increased, they could threaten the bighorn sheep in the Tetons.

Bring it to the classroom: Access a version of this article modified to an eighth grade reading level.

Now, 30 years later, that exact situation has occurred. Mountain goats have established a breeding population in the Teton Range. Meanwhile, the bighorn sheep herd is declining. Managers now face a decision about which species to prioritize, and to what extent.

To restore wild sheep populations, wildlife managers implemented intense recovery programs, translocating animals from healthy herds to struggling populations and to vacant habitats that historically supported wild sheep. The Teton herd is one of four core native herds in Wyoming, meaning that the herd has never gone extinct and no sheep have ever been translocated into it. The herd is considered genetically valuable because its ancestors survived the severe reduction of the species in the 1800s and early 1900s. It is also the smallest and only non-migratory core native herd in the state. “This is a remnant of a population that has been there for thousands of years,” Whitfield says, “but now the goats threaten that.”

“We don’t want the Teton herd to go extinct and we don’t want to augment it with other sheep because the risk of accidentally introducing disease into the herd is too high,” Wyoming Game and Fish biologist Aly Courtemanch adds.

That will mean protecting the small Teton herd from all sorts of threats, including mountain goats. In the 1960s, Idaho Department of Fish and Game officials wanted to establish a mountain goat herd for hunting. They identified the Snake River Range in Idaho, west of the Tetons and Wyoming state boundary line, as an ideal place, even though mountain goats had never been in that area previously. Mountain goats are native from western Montana into the far north of Alaska but not within Wyoming. Deceiving as it may seem in today’s day and age where parts of Wyoming boast populations of mountain goats, there is no historical or archeological evidence that mountain goats were ever present.

Over time, animals from the Idaho translocation trickled into Wyoming. By the 1970s and 1980s, people saw the occasional mountain goat in the Tetons. By the late 2000s, the mountain goats had made a new home and established a reproducing population, smack in the middle of the Teton Range, nestled between two sub-populations of Teton sheep.

Wildlife managers began monitoring the goats. As researchers like Whitfield had predicted, the growing mountain goat population began to threaten the native bighorn sheep. In recent years, the sheep herd has declined to fewer than 100 animals due to a combination of factors. During the same time period, the mountain goat population doubled; due in part to the fact that females often give birth to twins. Last winter, Courtemanch counted 81 bighorn sheep and 88 mountain goats, marking the first time goats outnumbered sheep in the Teton Range.

In the winters of 2018 and 2019, Courtemanch observed mountain goats moving into the northern and southern parts of the range, “areas [that] have historically been important wintering habitat for bighorn sheep,” she said. One study that took place near Yellowstone’s Northern Range suggested that in areas where their ranges overlap, the two species have similar diets and compete for food. In an area like the Tetons where winter food is extremely limited, wildlife managers predict that mountain goats could outcompete bighorn sheep for resources. Where mountain goats and bighorn sheep have lived together in Canada and Montana for thousands of years, both species have enough habitat and the goats choose steeper terrain than the sheep.

As mountain goats move closer to bighorn sheep in the Teton Range, the risk of disease transmission increases. Bighorn sheep are especially vulnerable to pathogens that cause pneumonia, a disease that has left the entire species across the West in shambles. Domestic sheep can introduce pneumonia to wild sheep. While all the domestic sheep grazing allotments in the Teton Range are now closed, some still remain in the Snake River Range where they overlap with mountain goats that have tested positive for pathogens that can cause pneumonia. 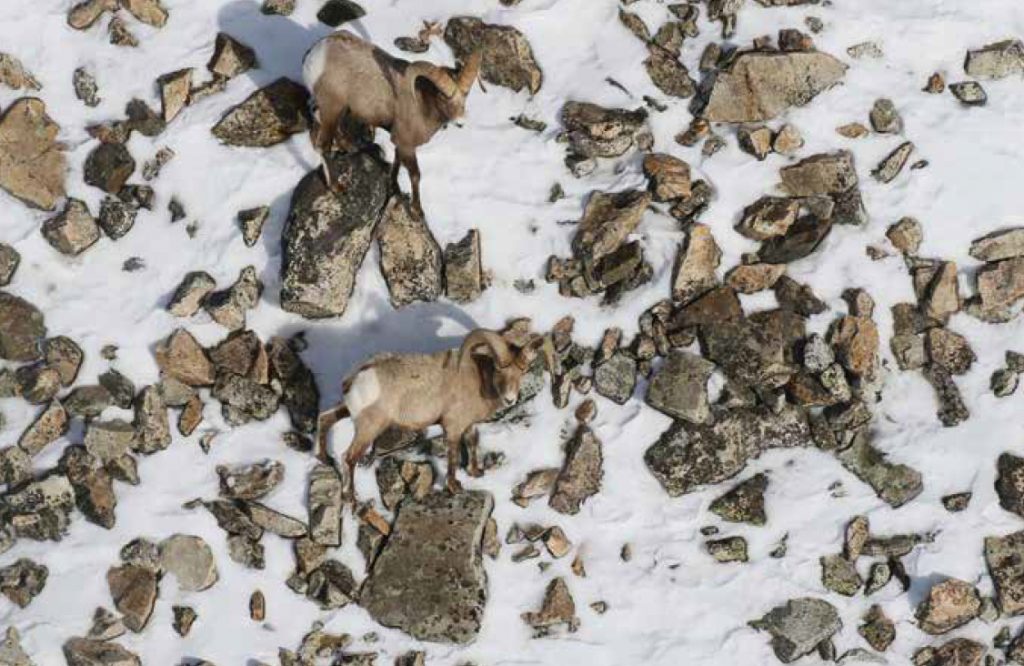 Two bighorn rams are some of the few last remaining members of the iconic Teton herd, which has remained intact, if diminished, while other herds around the West blinked out. Nonnative mountain goats now threaten to bring disease to the Teton sheep. (Photo by Mark Gocke, Wyoming Game and Fish Department.)

The Teton bighorn sheep herd has evaded the disease thus far, but a pneumonia outbreak would seriously threaten this small herd. In many cases, a pneumonia outbreak can cause 50 to 80 percent mortality of a herd within a couple of years. Managers want to make sure that doesn’t happen.

The agencies that manage bighorn sheep and mountain goats are working to address the problem. To manage goats in the Tetons but outside of the Grand Teton National Park boundary, the Wyoming Game and Fish Department changed hunting regulations to help reduce the herd. Until 2018, hunters could harvest only one mountain goat in Wyoming during their lifetime, but that year the legislature approved changing that law. Now hunters can harvest an unlimited number of goats in their lifetime in certain hunt areas. In addition, the Wyoming Game and Fish Department also adjusted the boundaries for a new mountain goat hunt area. Last fall, in the first year of the new hunt area that lies just outside of the Grand Teton National Park boundary, the department issued 48 licenses. Due to the extremely difficult terrain and few numbers of goats outside of the park, the harvest was expected to be low. However, hunters harvested 23 mountain goats, more than expected.

Increased hunting outside of the park is not enough to reduce goat numbers and protect the Teton Range’s iconic bighorn sheep because a majority of the mountain goats live within Grand Teton National Park. So, in 2014, as part of the National Park Service’s policy to prevent exotic species from displacing native species, Grand Teton National Park began the planning process to decide how to manage mountain goats in the park. They considered approaches including no action, lethal removal from the air, using skilled volunteers to shoot goats, non-lethally capturing and relocating mountain goats, and fertility control.

Meanwhile, other factors in addition to mountain goats are also threatening Teton bighorn sheep. Winter recreation in important habitat areas and overly zealous fire suppression are also to blame for the sheep’s trouble. Currently, winter recreation is prohibited in two areas within the Tetons from December 1 to April 1 to prevent backcountry skiers from disturbing critical sheep winter areas. However, large areas of critical winter habitat currently remain open to recreation. Wildlife managers are also planning controlled burns to open up more sheep habitat outside of the park.

Park officials in Washington state faced a similar situation and are already carrying out a mountain goat removal program. In Olympic National Park, where nonnative mountain goats damage fragile alpine plants and threaten public safety, officials aim to capture and relocate around 600 goats and lethally remove those they can’t capture over five years. 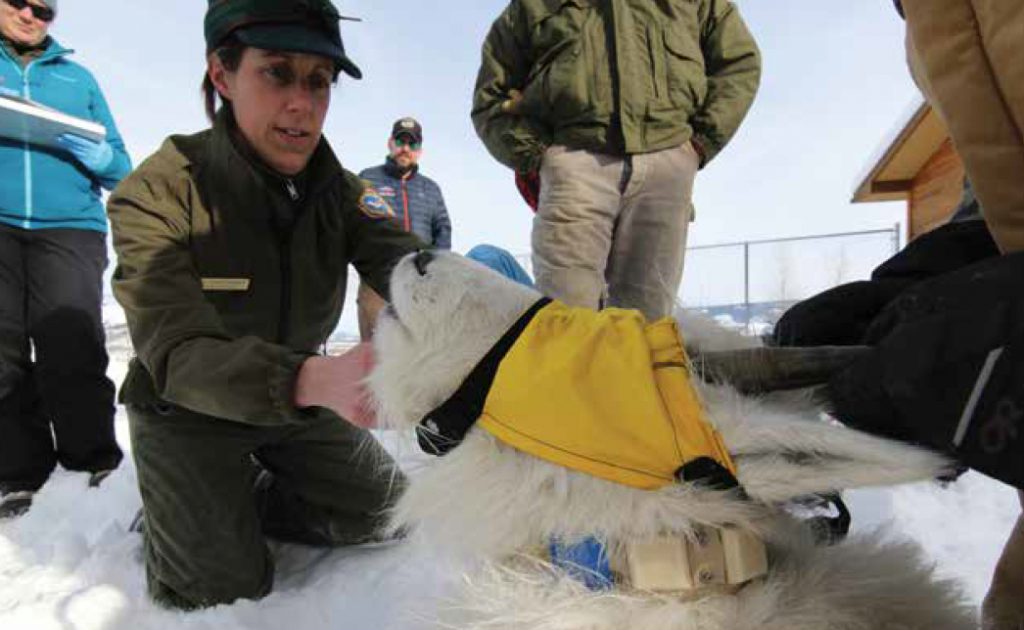 At the end of the planning process in 2019, Grand Teton National Park released its final Mountain Goat Management Plan. The decision was to relocate some goats to areas where the species is native or to accredited zoos and lethally remove the rest using qualified volunteer sharpshooters on the ground and a contracted professional helicopter crew from the air. Park officials would monitor the status of carcasses, and, depending on location and situation, may either leave the carcasses in place or remove the mountain goat meat for donation and distribution to Indian tribes, food banks, and other organizations.

The final plan received some push back from the Wyoming Game and Fish Commissioners, who disagreed with the method of removal for the mountain goats. In a letter to the acting superintendent of the park, Game and Fish Commission President David Rael wrote “The use of aerial gunning by GTNP [Grand Teton National Park] personnel to remove these goats is inconsistent with all notions of game management, fair chase, and totally inconsistent with years of GTNP management of big game animals in the GTNP.…The Commission strenuously urges the National Park Service to immediately cancel plans to kill the mountain goats via aerial gunning and implement a plan allowing the mountain goats to be removed by skilled volunteers.”

Emily Reed was born into a fifth-generation working ranch family, growing up on the fringes of the prairie and alpine landscape of Wyoming. She is a conservationist by training and a writer by passion, drawn to stories that illuminate modern-day life in the West where humans and nature intersect.