A potential solution to invasive mussels

One hundred thousand quagga mussels can live in a single square meter, and 450 trillion of them infest Lake Michigan alone.Quagga and closely related zebra mussels quickly spread, damaging ecosystems, deteriorating water quality, and leading to algal blooms. They clog boat motors, agricultural irrigation systems, and hydropower facilities, as well as consume massive amounts of plankton causing cascading food web effects. Their sharp shells rip up beachgoers’ feet. They have decimated the Great Lakes, and they’re moving west. Scientists first detected quagga mussels in Lake Mead in 2007, and now the species is present throughout Lake Mead and Lake Mohave, as well in other western waterways. Once the mussels infest a body of water, managers have no way to eradicate them. 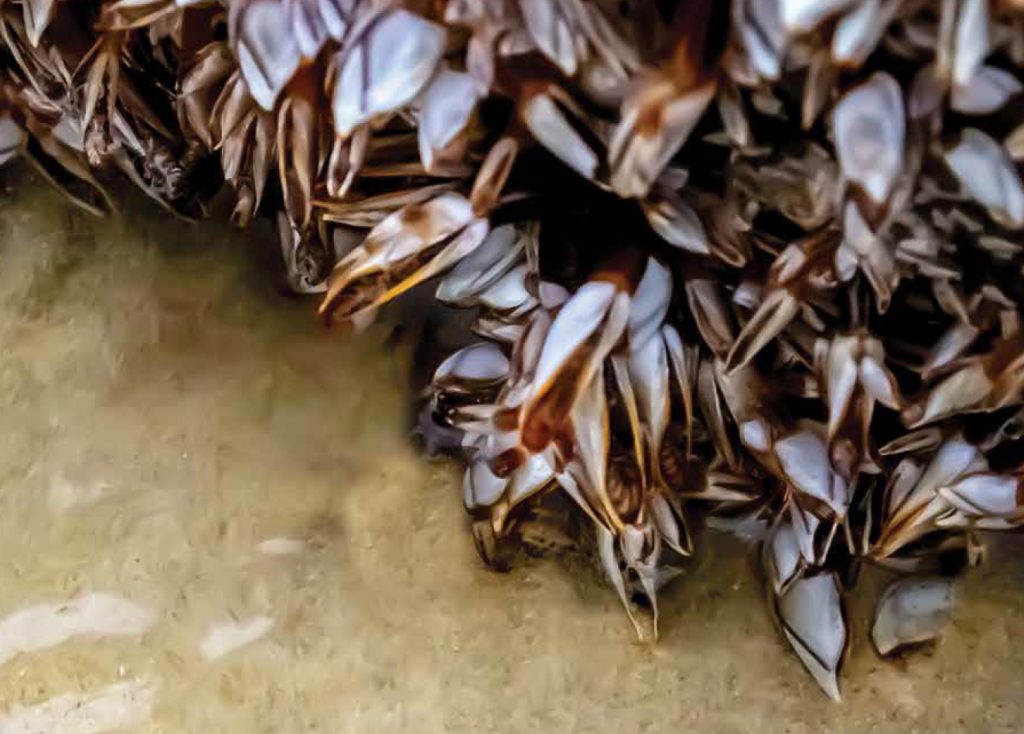 Officials are on the hunt for solutions. Currently, most efforts focus on preventing mussels from entering waterways in the first place, but since their western spread seems inevitable, researchers are also looking for solutions to remove infestations. In 2018, the Bureau of Reclamation held a prize competition that offered $100,000 for the most environmentally sound and cost-effective theories about how to eradicate quagga and zebra mussels from areas where they are invasive. The winning solution is a bit of a wild idea.

The mussels are native to waterways in eastern Europe, including the Black and Caspian Seas, where native predators keep them in check. They arrived to the Great Lakes via ballast water from ships in the 1980s. They now live in many areas of the eastern US and are spreading west.

“Reclamation is really concerned about the mussels,” Bureau of Reclamation biologist Sherri Pucherelli says. “They’re getting into hydropower facilities and causing some operational issues and maintenance issues.” She describes how the mollusks attach to water infrastructure where they clog pipes—which can lead to overheating—and disrupt water flow.

A molluscicide called Zequanox kills up to 90 percent of the invasive mussels, according to Beth Bear, Wyoming Game and Fish Department Aquatic Assessment Crew Supervisor, who notes the mussels have not yet been found in Wyoming. However, that rate of effectiveness might not be enough. “Ninety percent helps, but there are still so many of them that we really need something close to 100 percent,” Bear says. She also points out the difficulty of chemically treating large volumes of water and the potential for downstream impacts.

To address this enormous problem, the Bureau of Reclamation crowdsourced potential solutions via a prize competition. Over 100 teams submitted entries, and the judging panel reviewed 67. Steven Suhr and Marie-Claude Senut, founders of Biomilab, LLC, received the top $80,000 prize, with $10,000 awards going to Wen Chen and the team of Absar Alum and Stephanie Bone. Suhr and Senut’s winning entry proposes a controversial solution: modifying the genome of laboratory-cultured mussel cells to spread a lethal malignant hemic neoplasia—a cancer which can be transmitted merely by proximity—among the mussels. Of the runner up solutions, Wen’s proposal involved disrupting the proteins mussels use to attach to surfaces, and Alum and Bone proposed modifying genes so fertilized mussel eggs would die in sunlight.

Suhr and Senut, who both hold PhDs in molecular biology, came up with the winning idea based on canine disseminated neoplasia, a cancer spread from dog to dog, and a similar disease decimating Tasmanian devils. When they learned about a form of disseminated neoplasia in bivalve shellfish, they decided to investigate whether this could potentially work to wipe out invasive quagga and zebra mussels.

Their idea is only a hypothetical solution for now. Before unleashing it in the wild, a number of steps must take place. First, they will collect invasive mussels and culture their cells in a lab, making sure they aren’t affected by bacteria, fungi, or other contaminants. Since many forms of cancer involve mutation of genes that regulate cell division, they propose to mutate one critical regulator known as P53 to induce cancer.” Suhr says this type of modification is different than germline gene modifications, where genes are modified so future generations inherit certain traits. Suhr and Senut’s solution changes an independent cell and does not affect the mussels’ progeny.

“We’re in the weird position of actually trying to use cancer to an advantage as opposed to prevent cancer,” Suhr says.

Next, they will introduce the modified cells into live mussels in the laboratory to confirm the cancer can move between mussels and kill them. They also must run tests to ensure the cancer won’t harm other organisms. After seeing if the idea is feasible and possible, regulatory agencies would study the plan to make sure it is safe and effective before allowing any experiments in the wild.

Extreme caution is required since no experiment is foolproof. Any potential solution could have unforeseen implications when released into an ecosystem. With concerns about genome modification and unintended consequences—such as spreading to other species or moving into the species’ native range—development is slow and painstaking. “It takes time to develop because you also have to be careful with it,” Suhr says. He anticipates up to four years of laboratory work and says it could take a decade before their idea would be ready to apply on a large scale in an ecosystem.

“A lot of people would worry about this kind of stuff because obviously you don’t want to introduce something that’s going to impact the local shellfish population or any other kind of organisms,” Suhr says. “So there’s going to have to be a lot of testing in advance.”

While it seems like a wild idea to inflict cancer on a species to eliminate it, Suhr says sometimes the wild card option is the best one. “When you’re really trying to talk about eradication of zebra and quagga mussels in open waters and there aren’t a lot of good options, the crazy ideas may turn out to be the best possible choice,” Suhr says.