In the 1980s, more than 50,000 visitors toured Colossal Cave annually. A naturally formed limestone cave in Vail, Arizona, Colossal Cave brought in a small fortune, drawing adventure seekers and curious road-trippers alike. At the time, these tourists largely ignored the many species of bats that inhabited the cave system by the tens of thousands, other than to wrinkle their noses at the overwhelming smell of guano. To freshen the cave for visitors, the owners installed a large fan, blocking the entrance to the roost site. The blockage, air flow, foot traffic, and noise of so many tourists disturbed the bats, and their population declined rapidly. In 1988, only a few bats roosted in the cave, and one of the species, the lesser long-nosed bat, was added to the federal endangered species list.

Thousands of bats exiting a cave at sundown are silhouetted against the evening sky.

More often than not, tourism—which can draw massive crowds to fragile habitats like the roosts of Colossal Cave—clashes with species conservation. Because they provoke fear and disgust in many people, bats in particular have fared poorly when they cross paths with the tourism industry. But in what might be an unexpected twist, people interested in bat conservation are now turning to ecotourism to help protect what many consider some of our least charismatic endangered species. Can tourism actually help conserve bats rather than harm them?

The lesser long-nosed bat (Leptonycteris yerbabuenae), often confused with the vampire bat and once eradicated for fear of rabies, varies from reddish brown to gray, with a patch of brown fur across its underside. It is about three inches long with a 10-inch wingspan and weighs less than an ounce. A small triangular nose-leaf sticks up from the tip of its long snout, resembling a spade. With help from this characteristic nose, along with a tongue as long as its body, the bat laps nectar from agave, other desert plants, and the occasional hummingbird feeder. In late spring, the bat follows an agave corridor north from Honduras and El Salvador to southern Arizona and New Mexico. It feeds and travels at night, roosting in large colonies during the daytime. In summer, the female lesser long-nosed bat gives birth to just one pup. In the early fall, the bats return south. Threats to roosting sites and food sources from development along their long migration drove the bats to near extinction.

With very few bats left and an endangered species designation to contend with, the then-manager of Colossal Cave, Joe Maierhauser, implemented a tourism-friendly bat conservation plan in 1988. Maierhauser removed the fan, which reopened the original roost area and decreased the air movement through the cave. He also formed a committee of biologists, bat experts, structural geologists, and representatives from various legal, environmental, and health groups. Based on the recommendations of this committee, Maierhauser installed a system to monitor the temperature and humidity of the cave and built a new bat house near the entrance to lure the bats back. Multiple species, including the lesser long-nosed bat, slowly returned to the cave, and as of 2017, roughly 5,000 bats reside in the cave during the winter and nearly 20,000 in summer.

Drawn by the promise of bats in their natural habitat, tourists visit the cave from all over the world. They pay $16 for a 40-minute cave tour and $85 for the three-and-a-half-hour “wild cave tour,” which takes them a quarter of a mile down into the cave and past the bat colonies via cramped tunnels. These visitors also spend money at local businesses, such as hotels, campsites, and restaurants. By protecting the bat colonies in Colossal Cave, Maierhauser converted bats from a nuisance into an attraction. Now, the monetary success of Colossal Cave depends on a healthy bat population, which has only grown over the past two and a half decades.

Other places, such as state parks throughout the southwest, have also turned bat conservation into a tourist attraction that benefits both visitors and bats. For over 20 years, Friends of the Rio Grande Nature Center has sponsored a Winter Bird and Bat Festival in its namesake state park. Beth Dillingham, Rio Grande Nature Center State Park Superintendent, says the January festival “fosters an appreciation of the role bats play in the ecosystem.” Between 400 and 600 visitors attend the indoor festivities, which include presentations, arts and crafts, games, and a live bat predator demonstration. The festival boosts annual attendance to the nature center and generates a more widespread appreciation for an important species, one that visitors may otherwise be predisposed to fear. State parks all across New Mexico and Arizona also host bat festivals to make money for and educate the public about bat conservation. These events have been especially popular with children. “Kids are fascinated by bats,” says Dillingham. “Everyone is, I think, but kids aren’t afraid to show it.” And parents, who flock to festivals alongside their eager children, are learning to be fascinated by bats as well. 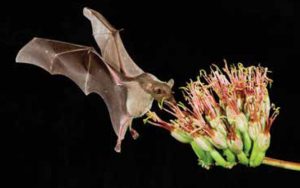 A less obvious form of bat ecotourism comes via the tequila industry, which has done its part to raise awareness and help the lesser long-nosed bat avoid extinction. As pollinators, lesser long-nosed bats feed on the nectar of night-blooming blue agave and dust themselves in the pollen. They dart from flower to flower, mixing and dispersing plant genetic material across the northern part of Mexico. But for years, tequila producers in Mexico harvested agave before it bloomed, when its sugar content was highest. That deprived bats of a consistent food source on their migration from Mexico to the southwestern United States and contributed to their decline. When a blight destroyed much of the agave in the 1990s, tequila producers recognized how the bats could cross-pollinate and thereby diversify their crops, protecting them from future diseases. To help the bats pollinate, producers started letting the agave flower bloom naturally. The bat population rebounded and the industry has not seen a blight since. The Tequila Interchange Project, a non-profit advocacy coalition focused on the sustainability of agave-derived alcohol, has begun to dole out “bat friendly” labels for conservation-centric products to encourage conscientious buying. This “bat friendly” tequila is popular not only with locals and tourists, but with international buyers as well. Like Colossal Cave, Mexico’s tequila industry has discovered just how economically valuable it can be to protect the lesser long-nosed bat.

The National Park Service may be able to learn something from the tequila example. In a time when budget cuts are a real concern for many national parks, ecotourism may be a smart way to raise the necessary funds for bat conservation. Carlsbad Caverns National Park in New Mexico provides a major roosting site for seventeen species of migratory and non-migratory bats, including the endangered lesser long-nosed bat. CNN calls Carlsbad Caverns one of the best caves in America, and the Smithsonian listed it among the world’s best places for bat sightings. In 2016, almost half a million people visited Carlsbad Caverns to see the cave’s bats. Sunset bat flights occur daily May to October, and visitors pay a $10 entrance fee, plus more for ranger-led tours. Each year, Carlsbad funnels over a million dollars of revenue into habitat conservation and public education.

Not all caves can generate as much money for bat conservation as Carlsbad Caverns and, for certain caves, the costs of ecotourism outweigh the benefits. Visitors can easily spook lesser long-nosed bats and drive them from the roost, or worse, wake them from hibernation. To best protect bats, some cave sites have opted out of tourism altogether. For example, Jornada Caves are critical to lesser long-nosed bat migration. The New Mexico Nature Conservancy, which owns the caves, closed them to the public after deciding disturbances to the bats were not worth the benefits of raising public awareness. Ecotourism cannot be a blanket solution for every cave but, in the right situation, it has the potential to generate both money and deep appreciation for even our smallest or creepiest endangered species.

On the outskirts of Albuquerque, tourists crowd Carlsbad Caverns’ rock amphitheater nestled beside the mouth of the low, gaping cave as the sun begins to set. A ranger instructs the visitors to turn off their cell phones and cameras—anything with a light or electrical signals—and look toward the sky. “The bats exit in a thick black cloud,” Ranger Valerie Gohlke describes, “If you stand near the entrance you can hear the whoosh, whoosh sound of their flight and oftentimes smell them.” She compares the swarm of hungry bats to a tornado against the evening sky.

For lesser long-nosed bats, ecotourism conservation efforts such as festivals, bat viewing programs, and tequila consumption, seem to be working. The US Fish and Wildlife Service considers the species recovered from its brush with extinction, and recently proposed removing it from the endangered species list. As evidence of the conservation success, hundreds of thousands of bats exit Carlsbad Caverns for an hour every night, cheered on by a crowd of awed onlookers. And if you time it just right, visiting the cavern at summer’s end, you can watch newborn bats swarm the night sky on their very first flight.

Emily Powers is a fiction writer working towards her master of fine arts at the University of Wyoming. She writes about place and, in particular, the ways that humans inhabit natural spaces.