A first encounter with a gopher tortoise (Gopherus polyphemus) may not leave a lasting impression in one’s mind; indeed, you might think this brown tortoise could just as easily be at home in any neighborhood park or pet store. Its modest appearance, however, greatly understates its immense contributions to both conservation and endangered species policy. This drab-colored tortoise has inspired an unprecedented collaboration of conservation efforts among federal and state wildlife agencies, and for that, it at least deserves a second, more admiring glance. 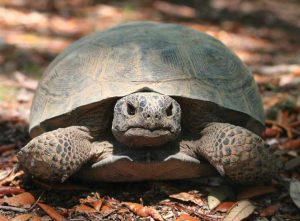 The gopher tortoise, a keystone species in the open, fire-maintained longleaf pine ecosystems of the southeastern United States, was listed under the Endangered Species Act as a threatened species in the western part of its range. When the US Fish and Wildlife Service was petitioned in 2006 to list the eastern population, a decade-long cooperative range-wide conservation program was born, championed by the Southeast Regional Partnership for Planning and Sustainability. Federal, state, and private sector conservationists devoted years to learning the conservation needs of the tortoise and the measures necessary for its protection, leading to the adoption of a multi-state gopher tortoise Candidate Conservation Agreement. Along the way, gopher tortoise conservation research fueled and invigorated region-wide efforts to restore longleaf pine, which, in addition to the tortoise, is home to other ESA-listed species such as the red-cockaded woodpecker, the indigo snake, and more than 200 other commensal species. These efforts, independent of regulations that would come into play as a result of an ESA listing, promise to conserve the tortoise and its habitat to the point where the direct application of the ESA is unnecessary.

Too often we read about species-related crises and conflict, while success stories go relatively unpublicized and uncelebrated. While the ESA is frequently portrayed as a draconian, command-control approach to wildlife conservation, that portrayal isn’t always true, and it certainly does not need to be. Indeed, the ESA works most effectively when its requirements never come into play because it spurs proactive conservation actions among federal, state, and private sector stakeholders. The successes of the gopher tortoise, the greater sage grouse, and others are examples of the flexibility and creativity that can be employed under the ESA. At a time when “ESA reform” makes the headlines, it’s critical to look deeply into the innovation and efforts that are actually working to accomplish species conservation, rather than praising or condemning the act based on anecdotes that may be wholly uninformed by direct experience or engagement in ESA work.

The conflicting interests that surround endangered species policy are what necessitate the development of new tools and strategies that promote species conservation while supporting other land use requirements. The gopher tortoise is found on some 19 military installations in its eastern range, all of which must manage their training and firing range activities pursuant to Integrated Natural Resource Management Plans. Ironically, this has resulted in more robust populations of gopher tortoise on training ranges, firing ranges, and other military lands than are generally found on other landscapes. Like the red-cockaded woodpecker, gopher tortoises do better on installation lands than they do on lands converted to crops and subdivisions. This is both a benefit to the species and potentially problematic to the military; the presence of listed species on the installations constrains the use of those lands for the military training and readiness activities the lands are intended for. These juxtapositions in interests necessitate innovative solutions, such as the recently developed Gopher Tortoise Conservation and Crediting Strategy.

The strategy—developed by the Department of Defense, USFWS, and state governments within the range of the eastern population of gopher tortoise over the last three years—intends to provide a net conservation benefit to the species. The strategy focuses on high-priority conservation lands that host important gopher tortoise populations but are not under permanent conservation management. It encourages interested military installations to purchase these lands and dedicate them to conservation management, which will protect viable tortoise populations, increase the size or carrying capacity of viable population areas, and promote the establishment of new viable populations, which will help make an ESA listing unnecessary. And in addition to promoting the conservation of gopher tortoise, management of these lands will benefit the other species, thriving or not, and longleaf pine habitats as a whole. The strategy will also provide participating Department of Defense installations a substantial amount of regulatory predictability should the eastern population of gopher tortoise be listed, by providing ESA mitigation credit that could help offset the impacts of future military actions that may adversely affect the species or its habitat, in concert with other conservation activities performed pursuant to installation Integrated Natural Resource Management Plans. The objective here is to ensure that current and reasonably foreseeable mission activities can continue without the need for additional species-specific restrictions.

In many regards, implementation of the ESA has gone largely unchanged over the last 30 years, despite the many real opportunities to improve its efficacy and efficiency. Actual on-the-ground experiences or attempts at making the ESA work should guide much-needed future efforts to improve its functionality. And the Gopher Tortoise Strategy is one good example of what works. Its development was motivated by a common desire to head off the need to list the species, based on the reality that negotiated, voluntary conservation regimes are more comfortable than imposed regulatory obligations and processes. It afforded an opportunity for the involved states to preserve their primacy over the management of their wildlife species and find a common interest between ensuring the conservation of the species and providing mission flexibility on the military installations. And it was done quietly, something made possible by the close working relationships and willingness to collaborate among wildlife professionals at the installations, the state wildlife agencies, and the USFWS.

Sometimes the ESA and its elaborate processes and mandates are absolutely essential to conserve threatened and endangered species. As Chief Justice Warren Burger reminded us almost 40 years ago in Tennessee Valley Authority v. Hill (also known as “the snail darter case”), in enacting the ESA, “Congress intended endangered species to be afforded the highest of priorities,” and viewed the value of such species as “incalculable.” That notwithstanding, the ESA functions best when it need not come into play at all, because the presence of the act and the clear federal mandate to protect threatened and endangered species serves to encourage federal and state governments, and the private sector, to work collaboratively to ensure species conservation makes ESA listings unnecessary.

The gopher tortoise stands in mute testimony as an example of what can be accomplished to ensure species conservation without the need to put the protection of the ESA into play. So too does the greater sage grouse (for now, at least). But once short-term goals are met, it’s critical to recognize that they likely would not have occurred without the long-term security of the ESA to motivate people to work together in the name of conservation. So, don’t form your views of the ESA based on the stories that make the best headlines. Don’t disregard or underestimate the value of the ESA. And don’t underestimate what can be achieved through collaboration, or what even an unassuming, brown tortoise can inspire.

Mike Brennan has spent the past 20 years focusing on wildlife conservation strategies. He directs the Wildlife Conservation and Mitigation Program for Texas A&M University’s Natural Resources Institute and is a professor of practice at A&M. He is an adjunct professor at the University of Wyoming.