“Can you show me some ant mounds on Google Earth?” I asked Reilly Dibner. She took my computer mouse and zoomed in on the sagebrush steppe south of Jeffrey City, Wyoming, scanned around a bit, and then magnified an area speckled with little white dots like seeds on a strawberry. It’s no surprise she found the mounds so quickly. Dibner has a lot of practice searching for ants in satellite images. 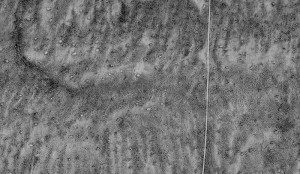 “Many species of ants are ecosystem engineers. They can change water infiltration and the nutrient content of soil around their mounds,” Dibner said. “They affect diversity of plants around their mounds. They create ‘islands of fertility.’”

“Fertility” is not a term taken lightly in association with the sagebrush steppe, a wind-battered, lichen-encrusted, gravely ecosystem peppered with knee-high shrubs and thin tufts of grass. In a world like this, ants “increase plant growth around mounds and increase biodiversity in part because of their seed redistribution.” Dibner pointed out dark borders around the ant mounds, visible in the aerial images, where plants flourish compared to elsewhere.

While ants’ engineering characteristics are pretty well studied, Dibner had a broader question. “I was interested how the spatial arrangement of ant mounds could increase the overall reach of ants on the landscape.” That matters to her for two reasons. One, because trying to understand biologically generated patterns is a cutting edge realm in ecology with implications for ecosystem health and restoration. And two, because if she could describe where ants were active in the sagebrush steppe, it might tell her something about where to find horned lizards. 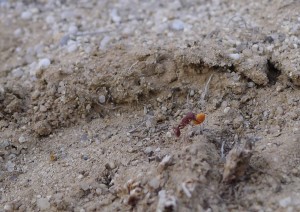 To sort this out, Dibner chose a large, nearly square study area. “I limited myself to Wyoming because I had to stop somewhere,” she said.

Within her state-bound study area, she referenced the USGS quadrangle maps, which divide the state into an even grid. Moving from one corner of the state,

she selected every fifth quadrangle offset on every third row for a total 153 rectangular plots, each covering approximately 60 square miles. Then, using Google Earth, she zoomed in to the center of each selected rectangle and spiraled outwards, scanning for ant mounds.

“If you haven’t spent a lot of time looking for ant mounds, you might think prairie dog mounds are ant mounds,” she said. To double check her ant mound identification skills, she visited several of the sites in person during her summer field season.

Dibner then uploaded aerial photographs of the study sites to a computer program and placed a dot on each ant mound, turning them into coordinates on a grid. This allowed her to measure the distance between mounds in multiple directions and to use statistics to put a number to the regularity of the ant mound pattern. She also compared ant mound locations and density to other landscape data such as elevation, precipitation, and vegetation cover type. 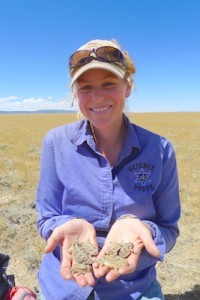 Ants from one mound won’t let others establish too close to them. “Those competitive interactions can give rise to regular patterning,” she explained, “as if they were placed on a checkerboard.” Dibner thought the ant mound patterns would break down when the mounds were more spread out or following some kind of environmental gradient such as rainfall. Rather, the mounds were more uniform than she’d expected over the whole study area, even where they were not as densely packed.

“Wherever I found harvester ants, they had robust spatial patterns, and those patterns can have consequences for ecosystem stability.”

To better understand those ecosystem consequences, she followed up with a question about the effects of any given ant mound. “We were hoping to find in the literature enough information to tell us how ants moved from a mound,” she said. “There was very little and nothing we could use.”

So she designed an experiment to learn how far from their mounds ants were foraging, and how thorough they were at gathering seeds. She and her field techs chose some ant mounds about 20 meters apart. They measured even teaspoons of birdseed into salad dressing container lids and set them at regular distances from the mounds: 0 meters, 5 meters, 10 meters, etc. Then they estimated or counted each tray’s seeds every half hour from 6 a.m. until sundown. (They did take a break from about 2 to 5 p.m. when ants typically siesta.) Using this data, Dibner generated a graph of ant activity to help explain the reach of ant influence in the ecosystem. 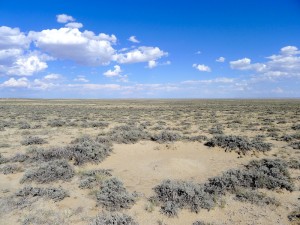 Ant mound in the sagebrush steppe at one of Dibner’s study sites. Photo courtesy Reilly Dibner.

“The fact that the mounds are highly regular increases the proportion of overall landscape that is close to a mound,” Dibner said. Combine that with her findings about how ants collected seeds and, “It increases the potential effect of the ants from that mound by a good bit.” Ants living in regularly spaced mounds can collect up to 16 percent more seeds from their surrounding environment compared to ants in randomly scattered mounds, Dibner calculated. Seed collection, she said, represents other influential ant activities, too, such as dropping seeds that might sprout into new plants, carrying nutrients from carcasses into underground burrows, or being food for horned lizards and other sagebrush animals.

When the ant mound checkerboard pattern gets disrupted, the ants that are foundational to the ecosystem miss patches of the landscape.