Hunting for a Sprague’s pipit in a changing landscape

Sagebrush scraped the doors of the beat up red truck as it bumped down the faint two-track. We were in the middle of The Nature Conservancy’s Matador Ranch in northeast Montana on the hunt for the elusive Sprague’s pipit. Nearly impossible to spot and increasingly rare, I had been searching for the Sprague’s pipit for years. This tiny brown grassland bird, no larger than a badminton birdie, may seem ordinary, but it is worthy of attention. Sprague’s pipits have the longest flight display of any other bird on the planet. Males dive in the air and sing to their mates for up to three hours without resting. 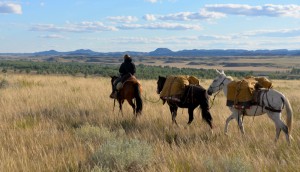 For their Rediscover the Prairie project, Robin Walter and Sebastian Tsocanos traveled 600 miles across Montana and Wyoming with four horses and a mule. Photo from RediscoverthePrairie.org.

I had stopped through the Matador Ranch as part of an expedition to document the changing prairie landscape. With four horses and a white mule named Pearl, my co-adventurer Sebastian Tsocanos and I were one week into a three-month journey to catalog North America’s grasslands—and the people protecting it—through film, photography, and writing. It is easy to miss vibrant grassland life when careening past it at 80 mph. Moving at a glacial pace with horses gave us a close up look at this massively transformed landscape. We’d started our journey in Montana’s Hi-Line, a thin stretch of country situated just beneath the Canadian border, and were winding our way through a maze of public and private land towards the foothills of Wyoming’s Bighorn Mountains, 600 miles from where we began. The Sprague’s pipit was just one of the rare grassland species we hoped to find along the way.

Sprague’s pipits likely arose before the Pleistocene an estimated four million years ago from an ancestral species in South America. Much of the lightly grazed mixed grass prairie they depend on for food, nesting habitat, and cover, however, has vanished. 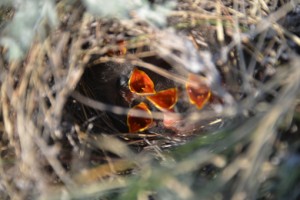 European settlers converted enormous tracts of grassland at the turn of the century, and fast-paced conversion continues today to meet our growing demand for food, fuel, and fiber. Over about 150 years, nearly all of our country’s grasslands have been replaced by one of three crops: wheat, corn, or soy. Furthermore, insecticides and rodenticides play havoc with the prairie food chain. Disturbance from oil and natural gas development take an additional toll. Fire suppression allows aggressive invasive plants like crested wheatgrass and leafy spurge to displace the native vegetation.

As intact grasslands have decreased, so has the biodiversity they host. Today, around 80 percent of all grassland birds are in decline. According to BirdLife International, Sprague’s pipits, once one of the most common birds in the prairie, have declined by 81 percent over the last 40 years.

Ecologically based agricultural systems might create a fighting chance for prairie species like the pipit. One such effort, underway in Salina, Kansas at The Land Institute, is to breed perennial grain, oilseed, and legume cultivars that mimic the native prairie ecosystem. Unlike annuals such as wheat, corn, and soy, which need to be replanted each year, perennials remain year-round. Their enclosed canopy rarely exposes the soil, decreasing the need for herbicides. In addition, perennial multi-crop systems better resist insect and disease outbreaks, reducing the need for pesticides.

Another solution is to keep the land in livestock production. Much of the Great Plains biodiversity evolved with grazing species. Think enormous herds of roaming bison. In modern times, cattle perform much of the grazing. World Wildlife Fund’s grassland specialist Kevin Ellison explains, “grazing animals can turn indigestible fiber into high-quality protein and leather for humans and can provide an economic livelihood for ranching families. This while maintaining a functioning and diverse ecosystem is a great win-win.”

As we bounced down a particularly bumpy stretch of two-track, sagebrush surrounding us for miles, Annie heard the laser-like song through the open window. We piled out of the truck. “The best way to spot a pipit is to lie on your back. You can take in more sky,” Annie told us. We lay down, careful to watch for cactus.

Against a backdrop of blue, we saw the tiniest speck, no larger than the period at the end of this sentence, drop toward the earth from two hundred feet above. Its signature pew pew pew pew descended, a delicate gurgling warble that plummeted to the ground just like the diving bird. Our spines flush to the ground, we watched two male Sprague’s pipits dart and surge through the morning sky. They came in and out of our vision as they belted out their crystalline, watery, and haunting flight song.

Robin Walter is executive director and co-founder of Rediscover the Prairie. The project has taken her across North America’s grasslands to report on land issues and conservation efforts in the West. Learn more at rediscovertheprairie.org.