Life Among the Turbines

On the eastern Wyoming plains, the wind whips hard across tough little bunch grasses, clinging to the soil. Sagebrush flows along the edges of nearby gullies. These rolling plains, remnants of a great grassland sea, are home to an array of birds. More recently, they’ve also become home to wind farms. 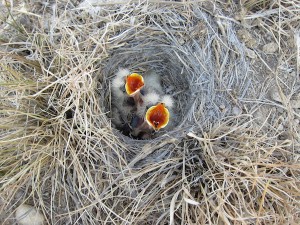 Scientists have been studying the risks turbines pose to migrating bats and birds for nearly two decades. But researcher Anika Mahoney wondered what they meant for the birds that make their homes and raise their young in a landscape increasingly populated by wind turbines. How might the sudden appearance of 400-foot-tall pinwheels affect grassland birds? So far, research on this topic has been slim.

“It’s just such a new and weird form of development for wildlife in those areas,” said Mahoney.

She had studied birds—but not wind turbine effects—before, and was attracted to a project with a “really specific question to answer.” As a biologist, she knew grassland birds weren’t doing so well. Grasslands have all but disappeared in the United States, overtaken by things like agriculture, oil and gas, and sprawl. The Wyoming Game and Fish Department wanted a scientist to investigate how turbines were affecting birds living in these areas. So Mahoney took on the project.

There are a few ways wind farms might affect birds living among them. First, in a treeless landscape, giant turbines are unlike anything these birds have seen before, said Anna Chalfoun, a professor at the University of Wyoming who oversaw Mahoney’s work.

“If they see a shadow that moves very quickly across the landscape, in their evolutionary history the only thing that makes a shadow like that is something flying swiftly overhead, and that would usually be a potential predator,” Chalfoun said.

Also, turbines emit a kind of deep, pulsing hum. This sound might affect birds’ ability to warn each other of predators, hypothesizes Chalfoun. Another change the turbines bring? Their blades kill birds and bats whose scattered carcasses may draw predators like coyotes—bad news for grassland birds and their nests. 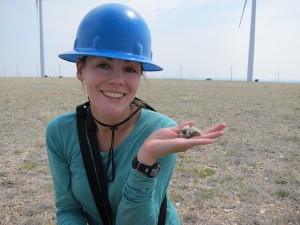 Mahoney decided to look for wind farm effects in two main ways. She wanted to see if there were fewer birds near wind turbines compared to elsewhere. She also measured how successful the wind farm birds were at rearing young, a key factor for population survival.

She did this for the two of the more common grassland birds in this part of Wyoming. One, the horned lark, has a yellow face and a black, Batman-like mask. It’s widespread now, but its numbers are declining. Mahoney, with the affection only a scientist can have for her subjects, called the larks “tough” and “underappreciated,” noting many of them spend the entire winter in Wyoming’s blustery, sub-zero climes.

The other was McCown’s longspur, a grayish brown bird with a rust-colored swatch on breeding males. Its colors may be duller, but the male’s courtship flight, a spiraling, singing spectacle, is unforgettable, said Mahoney.

On a typical field day, Mahoney and a partner, wearing hard hats, slog through an ocean of grass while the wind whips their faces. They walk away from the base of a wind turbine, a hundred-foot rope stretched between them. The rope brushes against the grass, and occasionally a scared bird takes flight.

“As soon as you see a bird fly from the rope, you drop the rope and head towards where you saw the bird fly from,” said Mahoney. She hunts for the nest the bird was sitting on, marks it on the GPS, and notes what’s going on—are there eggs, baby birds, birds almost ready to fledge? She’d then revisit the nest to track how well the offspring survived. Mahoney also counted birds at the different sites, to learn if there were differences in their numbers near turbines versus sites without them.

“I never would have predicted [that outcome],” she said. 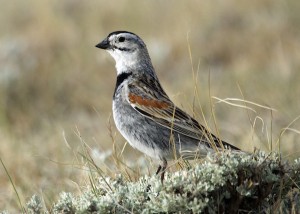 McCrown’s longspur, one of the birds Mahoney looked at in her study about the impacts of wind energy development to grassland birds. Photo courtesy Anika Mahoney.

There were 24 percent fewer larks near wind turbines—Mahoney found around eight or nine horned larks at each study site far from turbines, and often only five or six at sites with turbines. She also looked at a factor that hasn’t been studied before—turbine density. It turned out, the closer together the wind turbines were on the landscape, the less likely nearby horned lark nestlings were to survive. The horned larks in areas of higher turbine density also raised smaller young than horned larks in less disturbed areas.

McCown’s longspurs, in contrast, had similar numbers and nest success in wind farms compared to undeveloped grassland. Mahoney did find an effect on the longspurs when she combined data about vegetation diversity and wind turbines. Their numbers were higher near a turbine if it also had a mixture of bare ground and plants, lower if the vegetation patterns were more homogenous.

Her results leave Mahoney with more questions: Why does density affect larks more than nearness to turbines? Why does the McCown’s longspur not seem affected by either turbines or vegetation type, but those factors combined make a difference?

While scientists like Mahoney are scrambling to understand the interplay between new development and wildlife, wind farms keep springing up on grasslands in Wyoming and across the country. The Bureau of Land Management is marching south-central Wyoming’s 1,000-turbine Chokecherry and Sierra Madre project through its approvals. Once built, it will be the largest in the country. Analysis of its wildlife impacts has focused mostly on the eagles it will kill and the sage grouse it may displace. Mahoney’s work shows those are probably not the only birds that will be affected. Perhaps one day, her findings will help inform decisions on the siting and design of future wind projects.

Stephanie Paige Ogburn reports on science and environment in the West from Fort Collins, Colorado. Find more of her work at stephaniepaigeogburn.com.