When wildlife comes face to face with winter sports enthusiasts

Imagine you’re out for a pleasant winter stroll and just about to bite into your turkey and cheese on rye when suddenly you see the mask-clad horror movie character Jason bearing down on you, machete in hand. 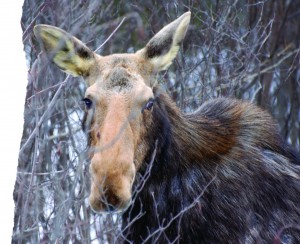 This is how Grant Harris, chief of biological sciences for the Fish and Wildlife Service’s Southwest Region, describes what it’s like for moose when snowmobiles approach them in their winter habitat. Harris is just one of many researchers who study how winter outdoor recreation affects wildlife when forage is scarce and animals are most vulnerable.

The number of people participating in backcountry snowsports is growing fast. By some counts, recent winters have found 3.3 million cross-country skiers, 4 million snowshoers, and 5 million skiers and snowboarders in the US backcountry. Snowmobiling is also booming, with participation increasing 67 percent from 1982 to 2009 and over 223,000 miles of designated snowmobile trails.

Harris’s team came up with one surprising finding after they captured Alaskan moose, fitted them with GPS collars, and mapped nearby snowmobile trails through aerial photography and GIS technology. They tracked snowmobile use and snow depth, and analyzed how moose reacted to the machines. When snowmobiles stayed on trails, they found moose could habituate to the machines and avoid them.

“Imagine it’s winter, you’re walking in the forest, and you hear a snowmobile coming,” Harris explained. “Half a minute later, you see Jason riding it, approaching you. You jump off the trail, hear him leaving and think, ‘Wow, that was really scary.’ But he left, you’re all right, and you get on with your life.”

In contrast, Harris’s team found snowmobiling off-trail was much more frightening to wildlife, especially when snowmobiles covered a large area for a long duration. Further, they report non-motorized recreation in winter (like cross-country skiing or snowshoeing) can disturb moose even more than motorized recreation.

“Now, imagine the same scenario where you’re walking a trail, round a corner, and Jason is standing in front of you with a machete,” Harris said. “You’d be totally freaked out. You’d run off the trail and probably not stop. You don’t know where he came from, if he’s following you, or where he’ll pop up next. Much more terrifying.”

Harris’s research about moose, snowmobilers, and skiers in Alaska is just one of many studies looking at how winter recreation impacts wildlife. Wildlife biologist Eric Gese wanted to know how the trails packed into the snow by snowmobiles affect wildlife behavior. He analyzed coyote movements at Togwotee Pass, a popular snowmobiling spot in Wyoming, and found that as snow depth increased, scavenging coyotes preferred snowmobile tracks over open snow. “Even though they could, as the crow flies, travel a much shorter distance but go through six feet of powdered snow, the coyotes will elect to stay on the snowmobile trail even if it’s two or three times the distance to travel,” to reach a wolf-killed carcass or other food source, Gese said.

In a similar project, ecologists John Whiteman and Steven Buskirk studied how an animal’s “footload”—the animal’s weight to foot surface area ratio—determined how often it would select a snow-compacted trail versus travel across open snow.

Not surprisingly, they found animals with higher footloads were more likely to follow snowmobile or snowshoe trails and would follow them for longer. For example, American martens, red foxes, and coyotes preferred to walk on compacted snow, whereas snowshoe hares didn’t mind crossing open snow. There was one twist in their findings: Though weasels have low footloads, they still preferred the hard-packed trails.

Not all wintering wildlife take advantage of tracks in the snow. Biologist Alyson Courtemanch used GPS technology to track both bighorn sheep and backcountry skiers in high-elevation winter habitat in the Tetons. She found that sheep dodged winter backcountry recreation routes even in areas that contained high-quality habitat. The sheep were very sensitive to even occasional use, and showed signs of disturbance whenever skiers were in sight. They also avoided ski and snowboard tracks even when no humans were present and the tracks overlapped some of the best habitat around. Fear of skiers meant the sheep didn’t use up to 30 percent of the high-quality habitat available.

If sheep find backcountry skiers in the Tetons scary, consider how Norwegian reindeer must feel about snow-kiters, people who ski or snowboard across the taiga, propelled by huge, wind-filled kites at speeds of over 60 miles per hour. When researchers observed reindeer reactions to skiers versus snow-kiters, they unsurprisingly found the snow-kites to be significantly more disturbing.

When the animals were frightened and trying to get away from a snow-kiter or skier, they stopped grazing. The animals typically couldn’t compensate for lost grazing time, leading to both undernourishment and overgrazing in areas without disturbances. Touring snow-kiters can travel over 60 miles in a day and cover a huge area of the reindeer’s range.

Also in Scandinavia, researcher Wiebke Neumann examined how even slow-moving, quiet skiers can disturb wildlife. She and her team fitted nine moose with GPS collars in northern Sweden to see how they’d react as cross-country skiers silently approached the animals. They found the slow-moving moose sped up for an hour after they were disturbed, enough to double their energy use. They also moved farther than normal for three hours following a skier encounter, and many times they would leave the area altogether. In this study, the moose showed no evidence of becoming accustomed to skiers. The reindeer study above also found that a ski trail saturated with skiers could create a barrier the reindeer wouldn’t cross, inhibiting their access to certain areas.

With all these impacts in mind, what is a wildlife-loving winter recreationist to do? Harris says staying on established trails helps lessen the disturbance. “If you knew Jason was only on one trail, you’d probably avoid that trail,” he said. “Anything that’s predictable in space and time will lessen impact and anything unpredictable in space and time will increase impact.” Still, he says, it’s important for people to get out in the winter. “The last thing I would want is to discourage people from using the outdoors.”

Gese, Eric, Jennifer Dowd, and Lise Aubry. “The Influence of Snowmobile Trails on Coyote Movements During Winter in High-Elevation Landscapes.” PLOS One 8, no. 12 (2013).

A New Kind of Energy