Just miles from Devil’s Tower National Monument, the sun was dropping in the sky, and Ian Abernethy, lead vertebrate zoologist for the Wyoming Natural Diversity Database, was preparing for the night ahead, pulling out mist nets, tiny radio transmitters, and other tools. Abernethy wasn’t sure what species he would encounter that night, but there was a good chance that some of the animals would be northern long-eared bats, Myotis septentrionalis. 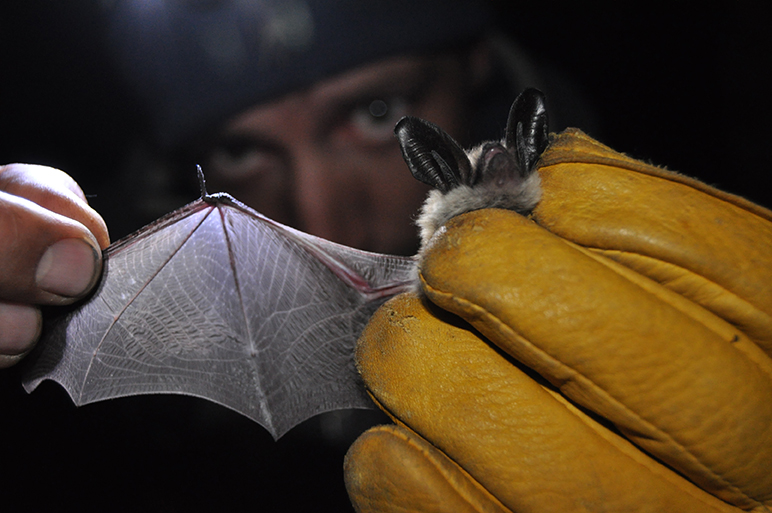 He also knew that this species is in grave danger. A disease called white-nose syndrome is decimating the species, which was listed as threatened under the Endangered Species Act in 2015. White-nose syndrome, which is caused by the aptly named the fungus Pseudogymnoascus destructans, kills up to 99 percent of the northern long-eared bats that become infected. The disease affects many species of bats, with varying mortality rates. It’s spreading rapidly and, while Wyoming bats are not yet infected, the disease lurks in eastern Nebraska, leading to concerns that it may spread to the Cowboy State.

The main purpose of Abernethy’s study was to learn about bats’ roost locations and habitat selection, but he also monitored them for evidence of white-nose syndrome.

He set up mist nets to capture bats near water sources soon after they awoke for the evening. When a bat would fly into the net, researchers would gently untangle the animal before measuring and examining it and recording the findings. Northern long-eared bats have small bodies, just 3–4 inches long and, predictably, long ears. The northeast corner of Wyoming, where Abernethy was conducting his research, is at the northwestern edge of the species’ range.

Abernethy would use surgical cement to adhere tiny radio transmitters to larger individuals before releasing them. The next day, the team would track the animals to see where each one roosted during the day. In summer, many bats roost in trees or rock crevices. In winter, many roost in hibernacula, usually caves and mines that host large numbers of bats in close contact. That proximity is thought to be a major factor contributing to the spread of white-nose syndrome since the disease can easily spread between animals huddled together.

Abernethy and his team checked each bat for signs of white-nose syndrome, visually inspecting wings, tails, and noses for tissue eaten away by the fungus. Infected bats act strangely during the winter months, sometimes flying outside during the day or clustering near the entrance of the cave. The disease depletes the fat reserves bats need to make it through the winter. So far, scientists estimate white-nose syndrome has killed 5.7 to 6.7 million bats from many different species in North America.

Over the course of 21 mist net sessions in 2015 and 2016, Abernethy captured 166 bats, including 29 northern long-eared bats; none showed symptoms of the condition. While white-nose syndrome is not yet in Wyoming, scientists fear it could infect many bat species in the state at any time. Since it was first recorded in New York in 2006, it has spread rapidly to 31 of the 37 states where long-eared bats occur. Scientists believe it came from Europe.

“How it got to North America is unclear, but it is most likely that humans have spread the fungus,” Abernethy says.

Last year scientists found white-nose syndrome in dead bats outside a cave in Cass County, Nebraska, just 450 miles from the Wyoming border. With the disease appearing to spread about 200 miles per year, this is troubling for Wyoming bats.

“It’s probably only a matter of time before it affects bats in Wyoming, unfortunately,” Abernethy says. 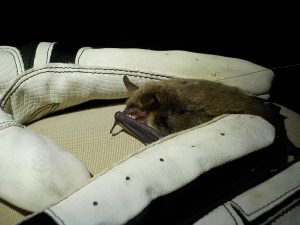 Researcher Ian Abernethy attaches a radio
transmitter to a northern long-eared bat (Myotis
septentrionalis). He will track the animal to its
roost to better understand what types of roost
structures the species requires. Photo by Doug Keinath / WYNDD

Laura Beard, non-game biologist for Wyoming Game and Fish, is also on the hunt for any sign of white-nose syndrome or the Pseudogymnoascus destructans fungus in Wyoming. While white-nose syndrome is transmitted bat-to-bat, it is also spread via contact with contaminated caves and mines. So Beard swabs the inside of caves and sometimes even gently swabs roosting bats themselves for samples, using a black light to detect fungal spores that fluoresce orange when exposed to UV radiation. Her team has surveyed around 30 hibernacula in recent years.

Humans visiting multiple caves may inadvertently transport fungus spores on their clothing, boots, or gear—which has led to strict guidelines for bringing equipment into caves. To protect bats, people should also avoid disturbing them, especially when they are hibernating, and report bats that are acting strangely to wildlife management authorities. Hopefully, these steps will slow the spread of white-nose syndrome and decrease mortality.

“We haven’t had any positives yet,” Beard says. But the fungus is “capable of jumping much greater distances than from eastern Nebraska to eastern Wyoming.”

However, Abernethy notes that even if the disease comes to Wyoming, it may not affect local bats as severely as eastern populations. One reason is that Wyoming bats don’t typically have massive hibernacula like bats back east, which might help limit the spread of the disease. While New York has hibernacula with tens of thousands of bats, Wyoming’s largest hibernaculum has fewer than 1,000 animals. Environmental conditions such as temperature and humidity might also affect the spread of the disease.

Also, not every bat species is affected the same way by white-nose syndrome. Hibernating bats are most at risk, but not every species hibernates. Some bats, such as eastern red bats, test positive for the infection but typically stay active and survive. Big-eared bats also seem to have less mortality, and Abernethy notes they like to hibernate in cold areas. While the fungus is found throughout Europe, bats in Europe rarely die from it, which may indicate they have developed some level of immunity, though researchers are still seeking answers.

While scientists are spending time in labs, caves, and out in the field trying to stop the spread of white-nose syndrome, they are also spending their time in offices, meeting rooms, and conferences, talking to each other and sharing their knowledge.

Beard notes the unity the scientific community is showing while fighting the threat, including sharing data and working together to coordinate a unified response.

“There’s been this amazing national response,” Beard says. “It’s one of the best examples of cooperation in science I’ve ever seen.”

Kristen Pope is a freelance writer and editor in Jackson, Wyoming. Learn more about threats to bats at whitenosesyndrome.org.