When the last passenger pigeon dies in the Cincinnati Zoo,
it is autumn,
a hot September day,
and the flight paths of the birds have been mapped,
invisible sky corridors they fly and then they don’t.
Her name is Martha, as in Washington.
Across the zoo, not four years later,
the last Carolina Parakeet will die
just a couple feet from where he is now still breathing. 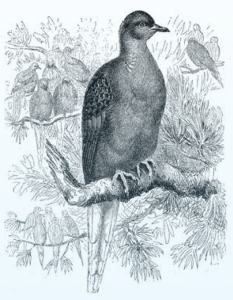 The last kaua’i ‘o‘o has his mating song recorded
and that song could play on loop until
the needle scrapes through the record
and the tape tangles
without a female ever hearing.

Benjamin, the Tasmanian Tiger,
stalks in his pen,
turning at the bars, over and over
not realizing he’s a tragedy.
That he’s the last beating heart,
all he’s thinking
is of getting out of this cage
to the no one waiting for him
somewhere out there.

Booming Ben, the last heath grouse,
goes missing from Martha’s Vineyard,
wandered off or eaten by a neighborhood dog.
And Celia, the last Pyrenean Ibex, crushed
under a fallen tree in Spain.

And watch the people watching Turgi in London,
Polynesian tree snail, its siblings choked by fungus,
devoured by invaders.
And what, good people, are you expecting to see?
What is it you want Turgi to do?

Bighorns Back from the Brink