Royal Dutch Shell’s primary business is the discovery, extraction, refinement, transportation, marketing, and selling of oil. It produces three million barrels of black gold each day and owns over 300 companies operating in over 100 countries, making it the second largest non-state-owned oil company in the world. When burned, its viscous moneymaker emits carbon dioxide, one of the leading causes of climate change. 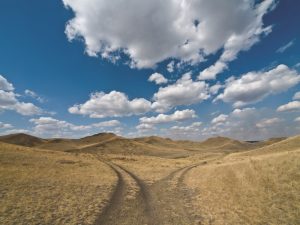 So why would Shell join five other “oil majors” in a letter asking governments around the world to put a price on carbon and address climate change, the “critical challenge for our world”?

One explanation is “scenario planning”—a strategy for peering into possible future scenarios and preparing for unseen, unexpected, and sometimes unwanted changes.

In the late 60s, Shell Executive Pierre Wack and his colleague Ted Newland set out to engage the company’s leadership in creative thinking. Among the biggest oil companies, known as the “seven sisters,” Forbes had dubbed Shell “the ugly sister” for its weak standing. Wack and Newland believed shifting how Shell leaders thought about the future would make the company stronger. They turned to scenario planning, a business tool designed to “go beyond conventional energy outlooks and consider long-term trends in economics, energy supply and demand, geopolitical shifts, and social change,” according to Jeremy Bentham, head of Scenarios, Strategy, and Business Development at Shell today.

Wack theorized that creativity could be institutionalized in corporate planning. Building on traditional scenario planning and military game theories, Newland and Wack divided visions for the future into two groups: the known and the unknowable. They wanted business leaders to not only consider what was probable, but also be prepared for anything possible. “I had the feeling,” said Wack, “of hunting in a pack of wolves, being the eyes of the pack, and sending signals back to the rest.”

To prepare business leaders for the unexpected and unknowable futures, he and Newland spoke openly to executives about the company’s hubris, and unearthed assumptions that would otherwise lie dormant. They analyzed data, but they also looked at possible global trends that most others ignored. They created a culture around questioning and exploring every assumption, resulting in several scenarios that discouraged the magnetic pull of the company’s ideal version of the future. Wack called it “the gentle art of re-perceiving.”

In 1972, Wack presented a report to Shell’s managing directors—recalled by those in the room as an “enthralling three-hour performance”— in which he outlined six scenarios depicted as a river forking into two streams, each dividing further into three tributaries. In one of those scenarios, he anticipated skyrocketing oil prices. He groomed Shell’s leadership to take immediate advantage of such a situation.

Then came 1973. The price of crude oil jumped from about $2.50 a barrel to $11 amid global oil shortages, sparking an energy crisis that left most oil companies scrambling to react. Some collapsed entirely. Meanwhile, Shell’s leaders swiftly diversified into nuclear energy and cut costs that had risen dramatically through the frenzied growth of the 50s and 60s. Thanks to Wack and Newland’s scenario planning, they knew the waterfall was coming before others felt the currents. By the end of the decade Shell was no longer the “ugly sister.”

“Forecasting produces answers, but scenario-based planning had made people ask the crucial questions,” wrote Kees van der Heijden, former Chief of Shell’s Scenario Planning. Or, as Newland put it, the scenarios, “create[d] a culture where you could ask anyone a question, and the answer would need to be contextual. Answering ‘Because I’m the boss’ or ‘Because the business case is positive’ was out-of-bounds.”

The scenarios allowed Shell to see realities that might otherwise be overlooked. Over the years, in part as a result of scenario planning, Shell has been stronger in its oil forecasts. It weathered, better than most, not only the 1973 energy crisis, but also the price shock of 1979, the crumbling oil market of 1986, the collapse of the Soviet Union, and the volatility of the Middle East.

Today, Shell’s scenario planning team is issuing a different warning: climate change is real, and we have to do something about it. Shell’s 2013 New Lens Scenario envisioned a challenging but “achievable” roadmap: sustainable economic growth coupled with net-zero emissions by the end of the 21st century.

The scenarios explore two paths: one that builds quickly and efficiently on natural gas as a bridge fuel while other alternatives develop, and the other building on the idea that solar becomes the top energy source over a longer timeframe during which climate change advances more rapidly. Both have different outcomes based on choices made by governments, businesses, and individuals over the short and long term. Shell’s report also suggests that carbon capture and sequestration (an expensive technology which hasn’t been developed on a commercial scale) will play a large role.

Striving for a net-zero emissions world may seem surprising from a company that has been in the business of carbon for over 100 years, whose main product releases billions of pounds of climate-change-causing carbon dioxide each year. What may be even more surprising is that Shell isn’t the only one envisioning a low carbon future. A letter to the UN from six “oil majors”—BG Group, BP, Eni, Royal Dutch Shell, Statoil, and Total—stated, “The need to cut emissions is so essential that we have to pursue all options to lower carbon while providing the energy the world needs to meet demand from a growing population…”

So what gives? One answer may come from a line later in that same letter. “[N]atural gas can help deliver this.”

Shell, like many oil companies, is vertically integrated, connected to the entire supply chain for both natural gas and oil. Natural gas has been called a “bridge fuel,” buying oil companies time to adapt because when burned it emits half as much carbon dioxide as oil. Unlike other fossil fuel industries such as coal, the oil business could actually benefit from a tax on carbon if it increases demand for low-carbon natural gas, which they can provide. Big oil companies know this. And they feel the headwinds of the Paris Accord, public opinion, and scientific evidence.

Reaction to the report has been mixed, and there have been some surprising advocates. For the first time, Shell’s leadership said the scenario, which aimed to stay within a global temperature rise of four to six degrees Celsius, didn’t go far enough. Two years after the report came out, Shell’s shareholders unanimously voted to force Shell to examine the possibility of keeping the increase of average global temperatures below two degrees Celsius, the goal of the Paris Accord. As a result, the company wrote an addendum to the 2013 scenario report.

And Shell has seemingly begun to adapt, establishing a company division called “New Energies” to invest in renewable and low-carbon power, combining its existing hydrogen, electrical, and biofuels division with wind power. But its annual spending on these low-carbon sources, mostly for research and development, is a small percentage ($200 million) of the $30 billion Shell invests in oil and gas research and development.

Shell’s business model continues to rely primarily on extracting huge amounts of fossil fuels, with no signs of slowing. Crude oil production is by far its major revenue stream. In its 2013 report Shell states, “we have no immediate plans to move to a net-zero emissions portfolio over our investment horizon of 10–20 years.”

Still, Shell’s long-term scenarios acknowledge and plan for a changing climate. Its leaders and board members, armed with scenarios, are embracing a changing reality, so if and when a carbon tax does take hold, they will be ready.

Case Button has covered policy issues for four years as a freelance journalist and speechwriter.

Energy in the West