Leather-clad motorcyclists cruised around Devils Tower National Monument in August 2015, eager to spot wildlife, breathe fresh air, and take in views of the towering monolith. While the riders were enjoying their public lands, scientists wanted to learn how noise from motorcycles was impacting local wildlife during the Sturgis Motorcycle Rally’s 75th anniversary. Researchers placed acoustic recorders in the park to monitor the impact of the “Devils Tower Run” August 5 event as well as the increased motorcycle traffic surrounding it. By placing recorders near the road as well as along a gravel road motorcycles couldn’t access, they established study and control sites to monitor bird and bat vocalizations. Camera traps and visual observations also recorded how other animals reacted to the increased noise levels.

Noise isn’t just annoying to animals—it disrupts some of their vital life functions. Chronic noise can make it difficult for animals to hear the cues they need for finding food, avoiding predators, communicating, and mating. Sudden, jarring noise can be perceived as a threat and cause animals to react by hiding, fleeing, or spending more time and energy on being vigilant rather than things like finding food. Especially loud noises can cause severe issues like hearing loss, but even if a species isn’t directly impacted by noise—or when the noise is outside a species’ hearing range—it can be affected indirectly, such as when a prey or predator species is impacted. Noise is considered a pollutant, and this is why researchers throughout the world are studying the impact roadway sounds have on ecosystems and wildlife.

In the Devils Tower study, researchers found animals had a variety of responses to the noise. Some, like the western wood-pewee—a small insect-eating bird—didn’t show much of a change in behavior. Others like white-tailed deer moved away from the road when it was loud but returned to their previous locations soon after the rally. Bats, on the other hand, showed a greater impact, with bat diversity reduced for weeks after the rally. The researchers noted that August is when mother bats and their pups emerge from maternity roosts, so they may be extra cautious during this time. Another theory is that the nocturnal creatures were especially sensitive to having their sleep interrupted, or perhaps the noise chased away bats’ prey insects and the bats followed. 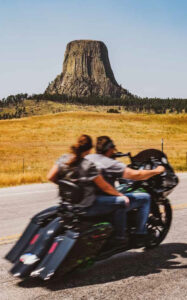 Rachel Buxton, a conservation biologist at Carleton University, was the first author on the Global Ecology and Conservation article about the study. “I think the important thing to note here, too, is that there’s a lot of activity in Devils Tower National Monument, and it’s a really small park,” Buxton says of the approximately 2-square-mile park. “So any animal that is remaining in the park has to be able to withstand a certain amount of noise anyways.” Animals in other, quieter areas may be more sensitive.

Of course, distinguishing sound from other road impacts can be challenging, so scientists created a “phantom road” to isolate these effects. Jesse Barber, sensory ecologist and associate professor at Boise State University, and colleagues worked in a roadless area to separate noise from other compounding effects. They set up an array of 15 pairs of speakers along a ridge crest in Idaho’s Boise Foothills, playing traffic recordings from a 45-mile-per-hour zone in Glacier National Park. For four days, they would gradually turn on the noise starting at 4:30 a.m. and gradually decrease the noise at the end of the day, turning the speakers off at 9 p.m. to mimic traffic cycles. Then, after four days of playing traffic sounds, they would silence the speakers for four days, before repeating the cycle.

The experiment was set during the fall bird migration, when almost all species stay in the area for fewer than eight days, allowing a new group of birds to be part of each experimental cycle. The Intermountain Bird Observatory has studied bird migration patterns in the area for over 20 years, so Barber knew birds’ typical patterns. Fall migration is a crucial time for the birds, when they must rest and conserve their energy for finding food and being vigilant.

“The cool thing about working in migration is that the birds are coming to you,” Barber says. “They’re passing through the site in waves.”

The researchers found a 31 percent decline in bird abundance when the speakers were on, with some species almost completely avoiding the experimental area. To further study the influence of noise, the scientists captured and examined birds, finding 5 of the 21 species surveyed had “significantly decreased body condition index” when they were in the group of birds exposed to the noise, as reported in a PNAS article. They “were largely unable to gain weight, like a migratory bird should be able to do,” Barber says. “That’s their only job—to pack on fat and evade predators.”

While Barber emphasizes they don’t know for sure, he says, “the effects that we found are really similar to what we see around real roads. That doesn’t necessarily mean that noise is the only thing causing trouble from roads, but it’s convincing experimental evidence that noise is a significant part of road ecology effects.”

Noise can also affect mating, as experiments have shown for some birds like ovenbirds and reed buntings. A 2013 literature review in Frontiers in Ecology, which Barber co-authored, noted that while ovenbirds don’t seem to leave when it’s noisy, “males defending noisy territories are less successful in attracting mates,” according to Habib et al, 2007. Reed buntings also have less success finding mates in noisy areas.

When more vigilant animals choose to leave an area to avoid noise, they leave the remaining animals—as well as themselves—more vulnerable since there is strength in groups. Further, when more risk-averse animals remove themselves, this could impact genetic diversity.

As scientists examine the impacts sound has on wildlife and ecology, they are also working to find solutions. Lower speed limits, instituting shuttle services in busy national parks, building berms along roadsides, and even a form of porous “quiet pavement” that absorbs traffic noise, could help. However, each option has limitations and trade-offs, from reducing habitat connectivity, to softer road surfaces requiring more frequent replacement. Barber points out it’s easier to solve the dilemma of road noise by avoiding building unnecessary roads in the first place.

“Mitigating noise pollution from roads is not impossible, but it’s complicated, and I think that not building new roads is the number one conservation action,” Barber says.

While scientists seek answers to reduce noise, they also point to the amazing natural soundscape found in nature and urge people to fully appreciate it.

“Noise pollution is really negative but natural sounds are really quite amazing, and I think they’re often underappreciated,” Buxton says. “When you go to your local park or to a national park, natural sounds are just such an integral part of your experience. You think about the Grand Canyon and the beautiful expanse of the canyon but also you’re hearing the wind blowing through canyon, the sounds of the river, the sounds of wind going through the trees and birds singing, and that’s all part of your experience in a park and those are all natural resources that are really important…I really think that they’re deserving of our protection.”