A researcher’s quest to protect an endangered dragonfly

I stand on a large, cement bridge on Interstate 355 over the Des Plaines River Valley in northern Illinois. Waves of air blow over me as vehicles whiz by. Then I see them—the iridescent green eyes—an endangered Hine’s emerald dragonfly flies towards me and then turns back, its wings shimmering in the morning sun.

This was one of a multitude of observations I made of dragonflies over the course of three summers as a graduate student seeking to understand the influence of roadway construction and vehicle speed on the behavior, mortality, and conservation of adult dragonflies, especially the Hine’s emerald. I undertook three research projects to explore strategies for mitigating vehicle collisions for this endangered species. Numerous studies have looked into the negative impacts of roadways on wildlife, but the majority focus on vertebrates, especially mammals. Invertebrates make up a large percentage of road-killed wildlife; however, little is understood about these deaths, and still less is being done to mitigate them.

My goal was to better understand road impacts to dragonflies and the relationship between vehicle speed and mortality to produce findings that could guide conservationists and highway managers. Invertebrate mortalities tend to be ignored, but that doesn’t mean that understanding them is any less important to the road ecology narrative. 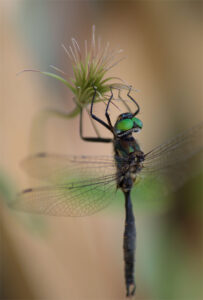 A Hines emerald dragonfly clings to a plant. (Photo by KaeCsImages, Shutterstock)

I was already interested in threatened and endangered species recovery when I learned of the opportunity to earn a master of science in biology while researching an endangered dragonfly. The Hine’s emerald is medium-sized—about 2.5 inches long with a wingspan up to about 3.3 inches—and has emerald-green eyes, a metallic-green body, and cream-yellow stripes on its thorax. It lives in spring-fed wetlands and sedge meadows overlaying dolomitic bedrock in Illinois, Wisconsin, Michigan, and Missouri. Habitat degradation and loss is the primary threat to this species that historically lived in Alabama, Indiana, and Ohio as well. Its larval habitat is incredibly difficult, if not impossible, to re-create. Thus, it has been a priority to focus on other ways to protect the species, including from the influences of roadways. This led to my projects researching how the Hine’s emerald dragonfly responds to bridge construction, vehicle speeds, and diversion netting to help conserve this rare species.

To investigate how bridge construction influences dragonfly flight behavior, I spent the summers of 2011–13 observing dragonflies on and below the I-355 bridge in northern Illinois. My research lab initiated the study before the bridge’s construction began in 2006 and followed it through 2007 as the bridge was completed and then for six more years after the bridge opened. This 1.3-mile long, six-lane bridge was designed with 80 feet of clearance below the deck to minimize its impact on wetland areas it passes over which includes Hine’s emerald dragonfly habitat. The idea was that with such high clearance, the adult Hine’s emerald would surely fly under, rather than over the bridge, thereby avoiding interaction with traffic altogether. My goal was to put all the data together to evaluate whether or not the bridge was hindering movement of Hine’s emeralds.

Standing under the bridge and on the bridge deck (with one lane closed), lab members recorded when approaching dragonflies flew under, over, or away from the bridge. We found that the Hine’s emerald dragonfly initiated crossing significantly more often prior to the completion of the bridge than when the bridge was nearly complete in 2007 and for the six years of the study that the bridge carried traffic. This indicates that the bridge impedes movement of the species despite its height. In 2013, the last year of the study, of all dragonflies observed, 91 percent never attempted to cross the bridge. Of those that did, nearly all flew over rather than under the bridge, putting them at risk of colliding with vehicles.

To determine how vehicle speed influences roadway mortality of dragonflies, we developed a study on roads in Door County, Wisconsin, during the late spring and summer of 2012 and 2013. We mounted GoPro cameras to the top of a truck, and I watched for dragonflies from the passenger seat while a driver drove 15, 25, 35, 45, and 55 miles per hour, mostly on a road known to pass through and along Hine’s emerald and other dragonfly habitat. When we encountered a dragonfly, I recorded the type of dragonfly, its flight height, and its fate. I relied on the many hours I’d spent observing dragonflies in flight to identify them, making judgements based on silhouette, size, color, wing markings, and flight pattern. When I wasn’t confident in my identification, I watched the videos captured by the GoPro cameras to assist me. On the occasion when we hit a dragonfly (17 times), we stopped to retrieve it and verify its identification.

We did this for almost 1,500 miles over two flight seasons. In all, we encountered 262 dragonflies from 15 species. Of the 262 encounters, at least 83 were Hine’s emeralds or other species in the same genus as the Hine’s (Somatochlora). I discovered that straight-fliers, including the Hine’s emerald, are more vulnerable to dragonfly-vehicle collisions than those that fly in zig-zag/bobbing patterns. Additionally, simply reducing vehicle speed from 55 to 45 miles per hour lowered the probability that a dragonfly of any species would be hit from 28 percent to 11 percent. For species belonging to Somatochlora—like the Hine’s emerald dragonfly—the probability of being hit drops staggeringly from 65 percent down to 27 percent.

As we thought about other methods to decrease the number of dragonfly carcasses along the roads, we wondered whether or not we could use netting to divert them from the road or force them to fly above traffic. A partner and I set up 3-meter-high diversion netting along the edges of two simulated roads, one 6 meters wide and one 12 meters wide, and then observed Hine’s emerald dragonfly flight heights and reactions to the netting. I wanted to know whether the Hine’s emerald would fly above the nets at either spacing, whether they would dip lower over the simulated road, or whether they would turn away from the nets, which would keep them out of traffic but also prevent them from moving between habitat patches. We found that the netting caused Hine’s emeralds to fly higher than when no nets were present, especially when the nets were only 6 meters apart. It also deterred some Hine’s emeralds from crossing the “road” at all. 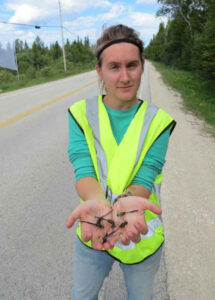 Because this was the first look at this idea, more work needs to be done before this method could be implemented. Results do suggest that this, or similar options, might be worth exploring further to keep dragonflies away from vehicles.

Good science is crucial to helping us better understand the often-ignored impacts we have on other species. Even though these studies focused on a few specific areas in the Midwest and the dragonfly species found there, the findings and the methods we developed could have implications for mitigating the impacts of roads to dragonflies—and perhaps other invertebrates—in other parts of the United States and the world. At that time, two of these studies were the only of their kind, and the bridge study was only the second to document the effects of a bridge on insect flight behavior.

We learned that building a super high bridge makes no difference, that erecting roadside netting might be a lower cost solution, and that slowing down by 10 miles per hour could have the greatest impact, probably at the lowest cost. Discovering the relationship between vehicle speed and the likelihood of a dragonfly-vehicle collision has power because it tells us what we can do. Conservation and highway managers could actually put this new understanding into practice and reduce one threat to an endangered species.

Amber Furness is a realty specialist with the US Fish and Wildlife Service in Lakewood, Colorado. She completed her master’s degree in 2014. Visit fws.gov/midwest/endangered/insects/hed and usdbiology.com/soluk to learn more about the Hine’s emerald dragonfly and other research by the Soluk lab.

The findings and conclusions in this article are those of the author and do not represent the official views of the US Fish and Wildlife Service.