Lenox Baker’s hands gripped the steering wheel, and the large silver ring on his finger glinted, revealing an outline of a black-footed ferret. He drove a dirt road toward the Pitchfork Ranch, which borders the Absaroka Mountains west of Meeteetse, Wyoming. The retired heart surgeon bought the ranch with his wife, Fran, in 1999, inheriting a connection to the black-footed ferret story. As his ring indicated, the ferret now holds significance in his own life.

Black-footed ferrets once numbered so few that they were thought to be extinct. Now, a massive effort entailing years of work from multiple government agencies and private landowners is underway to restore their populations. The Meeteetse area is the most recent place among many targeted for ferret recovery. This region is a historic range for the animal, but ranchers haven’t always welcomed endangered species, or in the case of ferrets, their prairie dog prey, onto their lands. If the ferret’s recovery is to eventually succeed, landowners like Lenox will be essential. 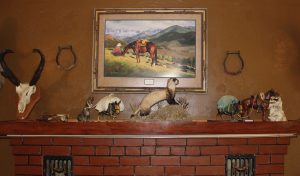 A mounted black-footed ferret adorns the mantle in the Hogg home. The mount was a gift from the US Fish and Wildlife Service to thank the Hoggs for their role in the ferret recovery effort. Photo by Sara Kirkpatrick

Ferrets are mysterious, difficult-to-find, nocturnal creatures. Prairie dogs make up 90 percent of the ferret’s diet, and ferrets use prairie dog burrows for habitat. Ranchers often view prairie dogs as a pest; they compete with cattle for forage, dig holes, and carry disease. Over the last century, eradication of prairie dogs and encroachment of farms and other developments into the prairie reduced prairie dog and ferret habitat, while disease, including sylvatic plague, killed both species. The ferret started to disappear. Black-footed ferrets were one of the first animals listed when the Endangered Species Act passed in 1973, but the listing didn’t keep the ferret population from declining, and by 1979 the species was considered extinct. 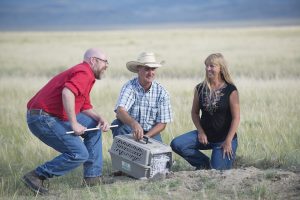 This would change at a ranch neighboring the Pitchfork on the morning of September 26, 1981. John Hogg’s ranch dog, Shep, brought a dead animal to the doorstep. At breakfast, John mentioned the unusual animal to his wife, Lucille. When she did not recognize the creature, they took it to a local taxidermist who identified it as a black-footed ferret. Knowing the ferret was an endangered species, the taxidermist notified the US Fish and Wildlife Service. The USFWS, along with Wyoming Game and Fish Department and consulting firms, investigated the Lazy BV Ranch in hopes of finding more ferrets.

To the surprise of the Hoggs and many others, wildlife officials found a population of about 124 black-footed ferrets on the ranch and in the surrounding area. For several years, the multi-agency team monitored the population. Then in 1985, sylvatic plague and canine distemper spread through the region, killing both ferrets and their prairie dog food supply. Ferret numbers dropped drastically, so in 1987 the agencies captured the few remaining wild ferrets to begin a captive breeding program. 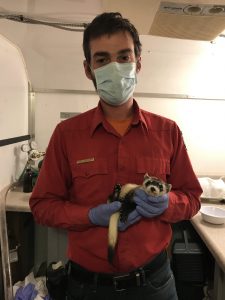 Wyoming Game and Fish started raising ferrets in the Sybille Wildlife Research Center in southeast Wyoming. Little was known about ferret biology, and out of the 18 wild ferrets captured, only seven reproduced successfully. But that was enough to build a captive population. After several years, Game and Fish and the USFWS prepared to reintroduce captive-raised ferrets into the wild.

One site the agencies evaluated for a potential ferret reintroduction was in the Shirley Basin between Medicine Bow and Casper, Wyoming. Anyone who hurts or kills an endangered species, even unintentionally, can incur a hefty fine, and so to get locals to accept the ferret reintroduction, the agencies needed a mechanism for protecting ranchers and other people who lived and worked in the Shirley Basin. Section 10(j) of the Endangered Species Act lets the USFWS reintroduce a “nonessential, experimental” population of an endangered species and holds private landowners harmless if they accidentally kill an animal while conducting otherwise-lawful activities. USFWS made the 10(j) designation for the Shirley Basin site, protecting landowners and allowing Game and Fish to move forward with recovery plans. 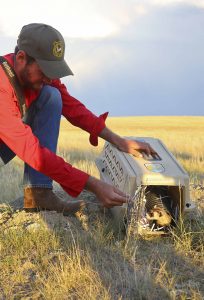 Jesse Boulerice releases a black-footed ferret to the wild. Photo by Mike Lockhart

In 1991, Game and Fish released captive-raised ferrets in Shirley Basin. This became the first ferret reintroduction site in the world, where over four years the agency would release 228 ferrets. This was only the beginning of the recovery effort for the species, and the animal would soon experience setbacks. Plague hit prairie dog colonies, reducing the ferret’s main food source and directly killing some ferrets. With its ferret budget down, Game and Fish couldn’t survey the introduced population as often as needed. Still, in the early 2000s biologists found a strong, growing population that had survived the plague outbreaks. By 2008, the Shirley Basin population was stable at an estimated 250 wild ferrets.

While the black-footed ferret story has its roots in Wyoming, it has grown into a nationwide effort. Federal, state, tribal, and non-governmental entities have worked together to release ferrets at over 30 sites in South Dakota, Montana, Arizona, Colorado, Utah, Kansas, and New Mexico. The genes from these released ferrets can all be traced back to the original wild ferrets from Meeteetse. The USFWS set a Wyoming recovery goal at 341 ferrets. Both Game and Fish and USFWS have a substantial amount of work to do before the ferret can be delisted. 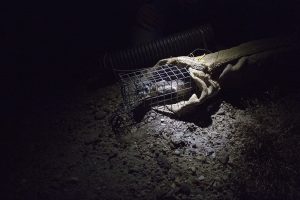 Black-footed ferret in a trap. Photo by Jessica Grant

Game and Fish has long expressed interest in a statewide 10(j) designation to encourage more private-landowner involvement in ferret recovery efforts. In 2015, the USFWS approved a statewide 10(j) to protect landowners who could provide habitat for the ferret. With the new ruling in place, Game and Fish approached Lenox Baker, owner of the Pitchfork Ranch, and Kris and Allen Hogg, owners of the Lazy BV Ranch, about the potential of a new reintroduction site on their land.

The landowners’ engagement and support of the ferret reintroduction was critical. Lenox had already let Jesse Boulerice, a non-game biologist for Game and Fish, and his team stay on the Pitchfork to work on an experiment for plague vaccines for prairie dogs. Jesse found the vaccine showed potential as a tool for managing plague, further boosting support for ferret reintroduction. Meanwhile, Allen Hogg, John and Lucille’s son, and his wife Kris, were ready to carry on the family legacy. Their involvement in the recovery effort was driven by their personal connection to the ferret’s rediscovery. “My dad would light up when he told the story,” Allen said. 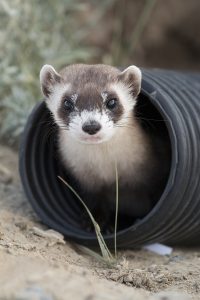 A captive-raised black-footed ferret peers out of its hiding place. Photo by Mike Lockhart

Many county commissioners were nervous, considering the recent controversy with wolf reintroduction interfering with ranching operations, so Game and Fish assured them the 10(j) rule would protect landowners and surrounding residents. “With the 10(j) rule, if our neighbors did find ferrets on their land and didn’t want them there, they can ask Wyoming Game and Fish to have them removed,” Allen explains. With the county commissioners’ support, in addition to landowner cooperation, the Wyoming Game and Fish Department was ready to move forward.

In July of 2016, the agencies released 35 captive-raised ferrets on the Pitchfork and neighboring Lazy BV Ranch. Thirty-five years after its rediscovery, the ferret returned to its historic home. 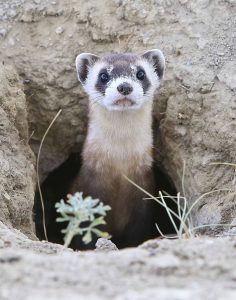 A black-footed ferret sticks its head out of a burrow. Photo by Mike Lockhart

In a survey of the Meeteetse site in September 2016, Game and Fish biologists counted 19 ferrets on the two ranches, more than half of the original 35, and some ferrets likely went undetected. In 2017, the agency found three wild-born kits and released 15 more captive-raised ferrets. Game and Fish hopes to see a self-sustaining population of ferrets in this location with at least 30 breeding adults.

As the more than three-decade-long ferret story attests, recovering an endangered species from the brink of extinction is no easy task, and private landowners such as Lenox Baker and the Hoggs are essential to this work. Allen said, “It’s been an honor to be a part of this.”

Sara Kirkpatrick is an undergraduate student at the University of Wyoming, double majoring in journalism with environment and natural resources.