On an unseasonably warm day last October, Richard Fox pulled up to the construction site of his future home near Pavillion, Wyoming, in an old Toyota pickup. Builders were fast at work raising walls and securing exterior panels in hopes of getting a roof in place before the snow started to fly. Located a few miles from where he and his wife, Hadley, spend their winters overseeing a small farming operation in west-central Wyoming, the site overlooks an irrigated field of pinto beans and alfalfa giving way to expansive views of the towering Wind River Mountains in the distance.

So far, the home looked like any other. Set upon a large foundation amid stacks of milled lumber, piles of dirt, and heavy equipment, an airy labyrinth of posts and studs soared to the sky framing windows and interior walls.

But what’s different about the Fox place is that, when it’s all said and done, the home won’t generate a utility bill.

That’s because it was engineered to produce as much energy as it consumes on an annual basis. It’s what’s known as a net-zero energy home. And if all goes as planned, it will be one of many in Wyoming.

“We’re confident that if we can build a couple of these homes, more people will see them and will want one,” says Jon Gardzelewski, the architect who designed the home, as he leads me on a tour around the build site. An associate lecturer of architectural engineering at the University of Wyoming, Gardzelewski specializes in ways to make buildings use less energy. “Ten years ago,” he tells me, “someone interested in sustainability might tack on a few solar panels or shading devices to help increase building performance and make their home more sustainable. While that can do some good,” he admits, “in most cases, poor design made them inefficient for passive solar heating and solar control.”

So in 2013, he and colleagues at the University of Wyoming set out to change that by forming the Building Energy Research Group, or BERG. Gardzelewski teamed up with Tony Denzer, head of the Civil and Architectural Engineering Department at UW, Liping Wang and Gang Tan, assistant professors in the College of Engineering with expertise in heating and cooling systems, and Ben Gilbert, an economist in the Department of Economics and Finance. The group conducts research on topics such as building performance and renewable energy options for residential customers like solar photovoltaics, wind, and geothermal, with the overarching goal of helping to improve the energy performance of buildings in Wyoming.

While it may sound far-fetched, the net-zero energy building concept is actually quite simple: start by reducing a home’s heating, cooling, and lighting loads as much as possible through architectural design and detailing (think Energy Star appliances and LED light bulbs); then make up the remaining energy needs with on-site wind or solar energy production. Homes are typically grid-tied for backup and to unload excess energy back onto the grid. 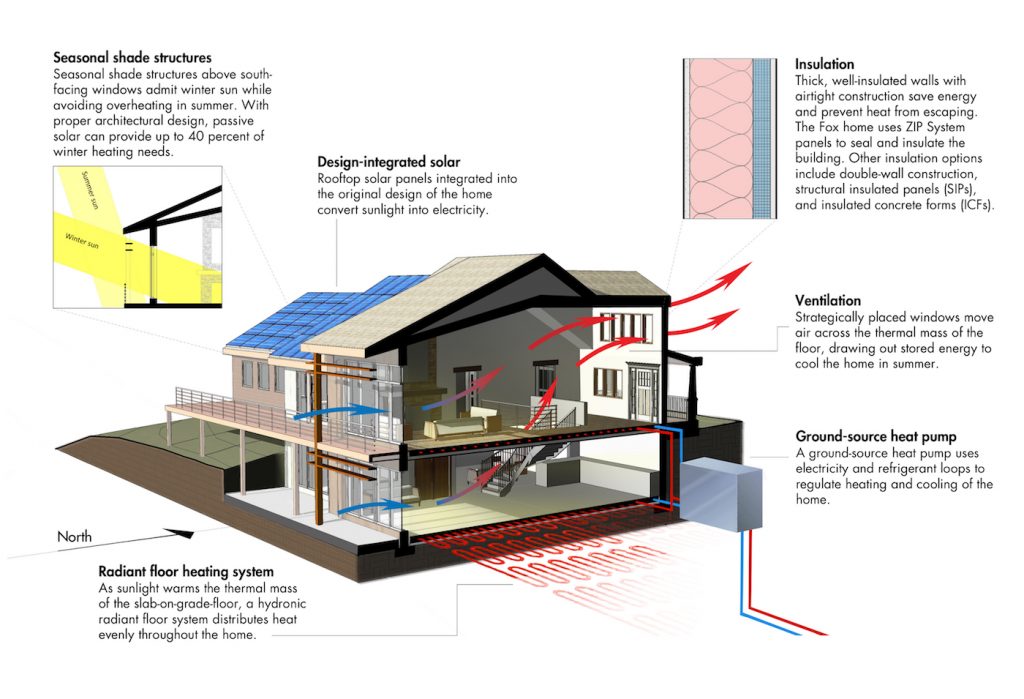 In the case of the Fox home, this equates to super-insulated exterior wall panels, air-tight spray foam insulation between the studs, and an abundance of south-facing windows to take full advantage of the sun’s natural energy. By incorporating lots of glass on the south side of the house and very little on the other three sides, the home is essentially engineered to heat itself through passive solar design.

Here’s how it works: in winter, low-lying sun shines directly through south-facing windows and warms up a large concrete floor. The thermal energy absorbed during the day then radiates into the living space at night, keeping the home at a comfortable temperature well after the sun goes down. A radiant heating system, powered by solar panels on the roof, runs through the floor and distributes heat evenly through the home. Heavy window shades help keep heat in at night.

“There’s enough thermal mass in this floor to keep this home at a pleasant, warm, livable temperature even on the coldest winter nights,” assures Gardzelewski.

“Every important technical challenge with regard to green building has already been solved,” asserts Denzer. “There is no new futuristic discovery that we’re waiting on. You can build a net-zero house tomorrow with commercially available, off-the-shelf stuff.”

To prove the point, BERG worked with architectural engineering students at the university to develop a catalog of net-zero energy home designs available for free to Wyoming citizens and homebuilders, a product line they’ve termed Frontier Zero.

“We looked at the housing market in Wyoming and other states across the West to see what kind of homes people were buying,” says Gardzelewski. As a result, many of the designs in the catalog were inspired by the craftsman style and other western traditions that complement the landscape and history of architecture in Wyoming. Model names like “Red Desert,” “Elk Mountain,” and “Fremont Peak,” are designed to appeal to Wyoming residents.

“We have big houses, we have small houses, we have homes that were designed for narrow lots, designs that are urban, suburban, and rural,” explains Denzer. Interested clients who don’t find exactly what they want in the catalog can contact BERG to come up with a custom design. Though the building requirements seem prescriptive, Denzer says there’s flexibility when designing and building net-zero energy homes to accommodate finances, client preference, or whatever the builder is comfortable doing.

Elsewhere around the country, net-zero energy homes have become increasingly popular in recent years, propped up in part by policies and initiatives that encourage, even mandate, zero-energy building designs.

Still, the net-zero movement has been slow to catch on in the state. “The barriers at this point are cultural, and maybe a little bit economic in the sense that it costs a little more upfront,” asserts Denzer.

About 10 percent more, to be exact.

To demonstrate, he lays out a scenario: say you build an ordinary home and the monthly mortgage payment is about $2,000. You’d still have to pay for heat and electricity, which is probably around $200 a month. So, it’s $2,200 for the ordinary house including utilities, but it’s also $2,200 for the net-zero house. If you build a net-zero energy home, the mortgage payment will be slightly higher, around $2,200 a month, but there is effectively no utility bill.

“You’re paying a 10 percent premium up front, but you’re getting back enormous benefit by not paying a utility bill for the life of the home,” explains Denzer. Not only that, net-zero homes aren’t subject to fluctuating utility prices and may actually prove to be a moneymaker in the long run.

While net-zero energy homes can be built for just a little more than the cost of a conventional build, Gardzelewski says they sell for a lot more once constructed.

“What we’ve seen around the country is that people are willing to pay a relatively high premium for homes with design-integrated solar and no utility bill,” says Gardzelewski.

Unfortunately, increased value for net-zero energy homes is something appraisers in Wyoming have yet to acknowledge. So even getting a bank loan for the extra 10 percent to build a net-zero home can be a challenge.

“We might try to work on that someday,” says Denzer.

Back in Pavillion, Gardzelewski continues to show me around the build site, pointing out nifty features like the ground-source heat pump that drives the radiant heating system in the Fox home.

“There’s an old adage that goes something like, ‘pioneers get slaughtered while settlers prosper,’” explains Gardzelewski. “But we’re trying to help the pioneers, the early-adopters, prosper too.”

When I ask Richard Fox if he’s at all worried about being the first to build a BERG-designed home, he says not really. While he had some concerns that building a net-zero home would mean sacrificing priorities like spaciousness and livability, the BERG design actually enhanced those things. He says the net-zero choice made sense financially and environmentally.

“We live in a beautiful and unspoiled part of the state. As farmers, we pride ourselves on being good stewards of the land and environment.”

Kit Freedman is the Project and Outreach Coordinator for the Ruckelshaus Institute of Environment and Natural Resources at the University of Wyoming. Learn more about BERG’s research and design services at uwberg.org.

Lesson from a Tortoise