How energy efficiency and conservation can decrease UW’s utility bills

Keeping the lights and heat on at the University of Wyoming is a challenge. A campus quickly expanding with energy-intensive buildings is straining UW’s ability to meet its energy demand, even with a $10.8 million annual utility budget. While Wyoming enjoys some of the lowest energy costs in the country, the university is searching for ways to save money amidst major state budget cuts. UW Operations, the division responsible for buildings and utilities on campus, has so far managed energy demand with straightforward efficiency measures in both new and existing buildings. But with many energy-saving efforts already accomplished and even more new buildings in the queue, UW is now looking for additional ways to save both energy and money as the campus grows. 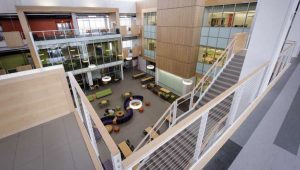 The Michael B. Enzi STEM building is one of several new buildings on the UW campus.

University campuses typically reduce energy use and utility bills through both conservation and efficiency efforts. Conservation relies on cost-effective behavioral changes, as simple as turning off the lights, to use less energy. UW has instead mainly focused on efficiency measures—infrastructural and equipment upgrades that perform the same work with less energy. Those measures have stabilized energy demand even as the campus has grown to over seven million square feet, an increase of nearly one million square feet in the last 10 years. Those efficiency measures have included lighting retrofits and ventilation upgrades in multiple buildings. Building automation systems, which control indoor climate and lighting based on typical occupancy schedules, have also yielded substantial savings.

The existing Biological Sciences building originally constructed in 1969, for example, underwent many of these lighting, ventilation, and building automation efficiency upgrades in 2012 and 2013. Improvements include equipment that recovers and recirculates heat from air handling units in the winter; low-flow fume hoods, which ventilate chemicals at workstations; low-horsepower laboratory air supply and exhaust valves; energy-efficient fluorescent lighting; and 50 percent reduced air exchange rates when labs are unoccupied, which decreases the total energy needed to move air in and out of the building. The building’s energy use per square foot now rivals that of some office buildings on campus, a major achievement for a historically high-energy-use laboratory building.

Many efficiency efforts in existing buildings have additional benefits beyond energy savings. A major air filter upgrade implemented across 17 buildings in 2014 has reduced maintenance and waste costs, as the new filters need less frequent replacement than older models. UW Operations estimates that the filter upgrade in the Berry Biodiversity Center alone will result in a 37 percent cost reduction compared to older filters due to savings in energy, labor, and waste.

UW has managed energy use in some of its new buildings as well. The Bim Kendall House, a 1950s-era building renovated into offices and meeting rooms for the Haub School of Environment and Natural Resources, relies on simple energy-saving measures. Opening a window cools a room and daylight reduces reliance on light fixtures. Variable frequency motors, expensive on the front-end, pay back quickly by reducing the amount of energy needed to push hot water through the baseboard heating system. Roof-mounted photovoltaic panels further offset the already relatively low energy use in this building. The even newer Marion H. Rochelle Gateway Center uses LED lighting throughout and operates with highly efficient chillers and boilers, which, in combination with its building automation system, result in a well-performing building. 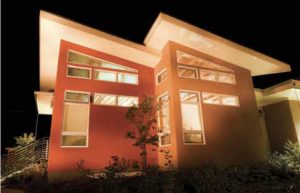 The Bim Kendall House at the University of Wyoming is home to the Haub School of Environment and Natural Resources.

While these efforts have reduced energy use in existing and new UW buildings, additional buildings will increase overall demand for heating, cooling, and electricity. Recent and upcoming buildings are among some of the most energy hungry on campus. The Michael B. Enzi STEM Building completed in spring 2016, the soon-to-be-completed High Bay Research Facility, and the in-design Engineering Education and Research Building and the Center for Integrative Biological Research, all require energy-intensive laboratory infrastructure that will add to UW’s utility bill even as the university’s budget decreases. “We’ve got a lot more to do,” to save energy and reduce utility costs, says Forest “Frosty” Selmer, deputy director for utilities management, who has been a champion for many of UW’s existing efficiency efforts. “A lot more.”

UW stakeholders, including the Campus Sustainability Committee, students, and UW Operations itself, are now advocating for next-level energy reduction measures in both existing and upcoming buildings. Selmer suggests installing digital thermostat controls in older buildings that lack automation systems to help regulate indoor climate and save energy. He also recommends frequent retro-commissioning, a sort of building tune-up that examines building performance to inform upgrades to building systems and major equipment—most commonly those related to air handling and distribution, heating, and cooling.

Another solution would be to fully fund UW’s Conservation and Efficiency Revolving Fund (CERF), which received approval from the university administration in 2014. The CERF would accept competitive proposals for investment in high-payback energy reduction projects and then track and revolve financial savings back into the fund to support future projects. The university piloted the CERF with funding from UW Operation’s major maintenance budget to support projects such as a proposal from undergraduate students to upgrade metal halide lighting to more efficient LED’s on Prexy’s Pasture. But the CERF requires a major infusion of external funding to invest in bold energy-saving projects. Similar revolving funds have been extremely effective at universities and colleges across the country, with projects yielding an average 28 percent return on investment. The CERF could serve as both a money-saver and a money-maker for efficiency at UW.

Designing all new buildings to use less energy from the outset would further curb energy use at UW. Students in the Haub School of Environment and Natural Resources’ spring 2016 Campus Sustainability course proposed minimum building efficiency standards for UW. Those standards, now in consideration for inclusion in the internal UW Design Guidelines, focus on energy efficiency and building life cycle analyses to account for operating costs as well as construction costs. And room remains to adopt even bolder standards.

Conservation—the behavioral change counterpart to efficiency—could also be an important part of the solution, one that Bill Mai, Vice President for Administration who oversees UW Operations, appreciates. “I think it really starts with people using what they need to use,” says Mai.

Students in the Campus Sustainability course have led the way on one major conservation effort by researching fume hoods, many of which operate on a variable rate system—the more open the sash (or window), the more energy the fume hood uses. They examined campaigns at universities across the country that ask lab users to keep fume hood sashes shut when not in use and as low as safely possible while in use. At MIT, “Shut the Sash” saves $41,000 per year for the Chemistry Department alone. The UW students designed a similar program that launched in January 2017 with the support of Risk Management and the Campus Sustainability Committee. The program is just one example of a simple behavioral change. A concerted, campus-wide conservation program could realize substantial cost savings for the university.

UW still has plenty of room to implement combined conservation and efficiency measures to further reduce energy consumption and cut costs. Oklahoma State University, an institution in a state with an energy economy similar to Wyoming’s, has saved over $30 million through energy efficiency and conservation since 2007. Major savings are possible when a university invests in energy reduction as another resource, alongside traditional and renewable energy. But such upfront investment and long-term thinking about savings can be difficult even in the best of times, especially in energy-rich Wyoming.

While these investments remain challenging in Wyoming with its abundant and low-cost energy, UW compares to institutions like sustainability leader Colorado State University in terms of energy use per square foot of building space. But in terms of square foot—and thus energy use—per student, UW is among the least efficient universities in the country. “We’ve got some poorly utilized buildings,” says Selmer. Since it’s far easier to raise funds for new building projects than it is for renovations of existing space, the campus is likely to continue to expand for the foreseeable future.

With more new buildings on the horizon, the university’s high energy use per person and overall utility costs will only increase. In light of that, Mai says it’s time to think big about efficiency. “If you don’t do it now, we are handing a massive problem forward to whoever succeeds us. And it just seems really irresponsible to do that.”