Following his GPS, University of Wyoming field technician Michael Gjellum descends into a canyon between the folded foothills of Pilot Hill, keeping a careful eye out for mountain lion activity. He’s been stalked before. Reaching a cluster of aspens that spring from the canyon wall, Gjellum stops and slings his pack onto the ground. 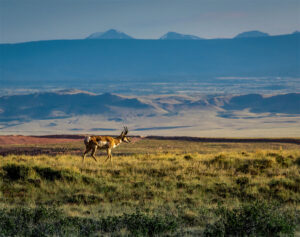 “You have to find the perfect tree,” he explains, standing in front of one and then another to assess each aspen’s viewpoint. He’s looking for trees with open views to mount four motion-triggered cameras that will capture photos of wildlife. The game cameras will provide data to researchers at the University of Wyoming studying wildlife and recreation.

Pilot Hill is slated for new trail development, and researchers are interested to see how the resulting influx of hikers, bikers, and horse riders will influence the current wildlife use. From mental and physical health boosts to a deeper connection with nature, recreationists benefit greatly from engaging with the outdoors, yet human intrusion into wild landscapes threatens wildlife. As communities across the west develop new non-motorized recreation trails, a growing body of research is helping trail planners understand how to protect wildlife throughout the process.

Pilot Hill abuts the eastern edge of Laramie, Wyoming, and overlies the Casper Aquifer, which provides drinking water for Laramie residents. The radio tower on top overlooks sweeping prairie through patches of aspen and conifer forest down to the Laramie Valley and out to the Snowy Range in the West. The Warren Livestock Company had owned this 5,500 acres of undeveloped short-grass prairie, forest, and ravines for over a century when they decided to offer it for sale to the City of Laramie in 2017. The potential land purchase spurred huge local support in the community, from business owners expecting an increase in tourism; to hikers, runners, bikers, and horse riders excited for new trails; to conservationists intent on keeping the area out of development, preserving Laramie’s viewscape, conserving wildlife habitat, and protecting the region’s water quality. In 2020, the state legislature approved the land exchange that made Pilot Hill public. Over the next few years, the community will build a new 43.9-mile trail network on Pilot Hill connecting to even more trails in the Medicine Bow National Forest.

“If we are strategic about it, we can create an open space corridor for wildlife and for recreation users… and create a huge Central Park, Western style,” says Sarah Brown Mathews, executive director for Pilot Hill, Inc., the nonprofit organization behind the land exchange. Mathews highlighted the role of the project in preserving open space as Laramie and the surrounding region grows, benefiting both residents and wildlife.

Laramie is not the only western town building new trails. While total new mileage is difficult to quantify, communities across the country are building new trails on open space, greenways, and other previously private or undeveloped land. Nationally, the Rails to Trails Conservancy has active trail-building projects in almost every state. In 2018, the Verde Valley Cyclists Coalition in Sedona broke ground on a new 29-mile trail system. Salt Lake City plans to build over 40 miles of trail in its northern foothills in the coming years. The “Colorado the Beautiful” project has created 16 new trails traversing hundreds of miles across Colorado. Harnessing volunteer power, the Sheridan Community Land Trust is constructing 22 miles of trail to add to its Red Grade trail system in northern Wyoming. And these are just a few examples. 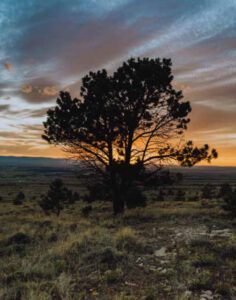 The sun sets over the Laramie Valley as seen from the upper end of the Pilot Hill property. (Photo by Michael Gjellum)

“As we started looking at the ecosystem more broadly, we realized non-motorized recreation impacts pretty much every part of the ecological system” says Abby Sisneros-Kidd, assistant professor at the University of Wyoming. As a recreation ecologist, Sisneros-Kidd explores the interactions between humans and environment when people recreate. Non-motorized recreation spans all sorts of activities, from hiking, biking, and skiing to riding horses, hunting, and fishing. As understanding about recreationist-environment interaction evolves, researchers are turning attention to the nuanced ways recreation affects wildlife.

“We talk about wildlife as this one collective unit, but different species respond to human disturbance very differently” says Sam Dwinnell, former wildlife research scientist at the University of Wyoming.

For example, researchers at Colorado State University linked the presence of hikers at Vail Pass to elk calf deaths by monitoring radio-collared elk’s movements in response to hikers. The researchers found that even seven encounters between elk and hikers during calving season resulted in 30 percent more calf deaths than for elk in areas without human disturbance. Elk may respond to human presence by fleeing, which reduces their foraging time as well as putting increased stress on the newly born calf. Increased fatality is just one way recreation affects wildlife.

In the Appalachian Mountains, researchers used game cameras to monitor how wildlife responded to trail construction. They found that deer and coyotes avoided construction and changed what time of day they accessed nearby habitat after the trail was established to avoid encountering humans. Conversely, raccoons used the area more during construction because the exposed soil made it easier for them to catch and eat invertebrates. In this study, squirrels stopped using areas near trails after construction, possibly due to the removal of dense understory making it harder for them to hide from predators.

A 2015 study in eastern Canada found hiker, mountain biker, and dog walker use of trails disturbed birds that nest or forage primarily on the ground. Recreation caused possible interference with breeding behavior, reduced foraging time, altered vegetation near trails, introduced invasive species, and increased presence of nest predators. In this study, the birds did not habituate to human presence even after trail construction ended.

Thanks to recent research, including the studies above, land managers can better plan for wildlife in trail development and usage.

In Vail, managers now close trails during calving season to prevent hikers from disturbing elk. The Appalachian study suggests shortening trail construction periods and restricting construction to avoid sensitive times like denning or calving seasons to help animals adjust to changing conditions. For species like ground birds and squirrels, leaving more area between trails conserves intact habitat. But it’s not all on the land managers. Recreationists must do their part in being wildlife friendly.

“The best thing recreationists can do is to stay on the trail,” Sisneros-Kidd says. Staying on the trail concentrates impacts and is more predictable for wildlife, as they can continue to access habitat away from trails without disruption.

As trail development begins on Pilot Hill, “One of the biggest potential impacts is going to be to wildlife,” says Sisneros-Kidd. A survey found the community to be evenly split between their interests of recreation development and wildlife protection.

The Pilot Hill organization is aware of the potential to affect wildlife populations. They plan to concentrate trails on the northern half of the property and space them to provide undisturbed habitat as well as improve user experience in the largely open landscape. The southern portion of Pilot Hill is designated as critical wildlife habitat and will remain virtually undisturbed but for a single trail. While undisturbed habitat may be best, “We want to honor that people want to be in that area and plan to establish a trail suited for people who want to be in there and not just have people out creating user trails on their own,” says Mathews.

In addition, the Pilot Hill Project will benefit from real-time feedback thanks to Gjellum’s game cameras, which are providing critical data to researchers assessing recreation development impacts on wildlife.

“We have a really unique opportunity to both add to the scientific literature and help sustainably manage this space,” says Sisneros-Kidd, one of the faculty members leading the study.

Sisneros-Kidd and colleagues Drew Bennett and Joe Holbrook are conducting a three- to five-year study to track how wildlife respond to Pilot Hill recreation. The researchers hope to determine whether the new trails displace animals or if the animals can adapt. Using game cameras, the researchers are tracking habitat use by animals including elk, mountain lions, pronghorn, and others before, during, and after trail development. In addition to the game cameras on Pilot Hill, researchers are using a nearby private parcel as a control to compare the developed and non-developed areas. Once trails open, researchers will monitor recreational use to assess how animals respond to human presence. Because trail building is expected to come in multiple phases, developers can revise the plan if the research shows trails are disturbing wildlife. With careful planning, land managers aim to create high-quality trails while maintaining wildlife habitat.

After setting the last camera, Gjellum climbs out of the canyon and hikes to a cluster of cameras he mounted months ago on the edge of a conifer forest. He removes the memory cards and downloads the pictures to his laptop. The pictures reveal pronghorn, elk, moose, deer, foxes, coyotes, mountain lions, bobcats, bears… and the occasional dirt biker or hiker trespassing before the land exchange was final.

“The reality of it is, you can have responsible recreation and you can have responsible development that takes into account more of these nuances of how animals respond to humans,” says Dwinnell, “We have these creative solutions at our fingertips that we rarely talk about. We need to talk about them more and implement them in how we design trails.”

Meghan Kent was the summer 2020 Science Journalism Intern for the Ruckelshaus Institute. She is a master’s student in the Department of Ecosystem Science and Management and the Haub School of Environment and Natural Resources at the University of Wyoming.