What do we really know about their effects?

As Cara Nelson, a researcher and professor of ecosystem science and restoration at the University of Montana, hiked around Missoula’s foothills, she noticed abundant knapweed and cheatgrass growing amidst native bunchgrasses and wildflowers. She became interested in studying approaches to control invasive plants. One of the most common techniques is spraying herbicides on noxious weeds and re-seeding afterwards with native seeds. Since spraying paired with re-seeding didn’t seem to be keeping the weeds under control, Nelson wanted to learn what the literature had to say about the efficacy and effects of herbicide use on wildlands. She was surprised to find limited research on the effects of herbicides on complex ecosystems. 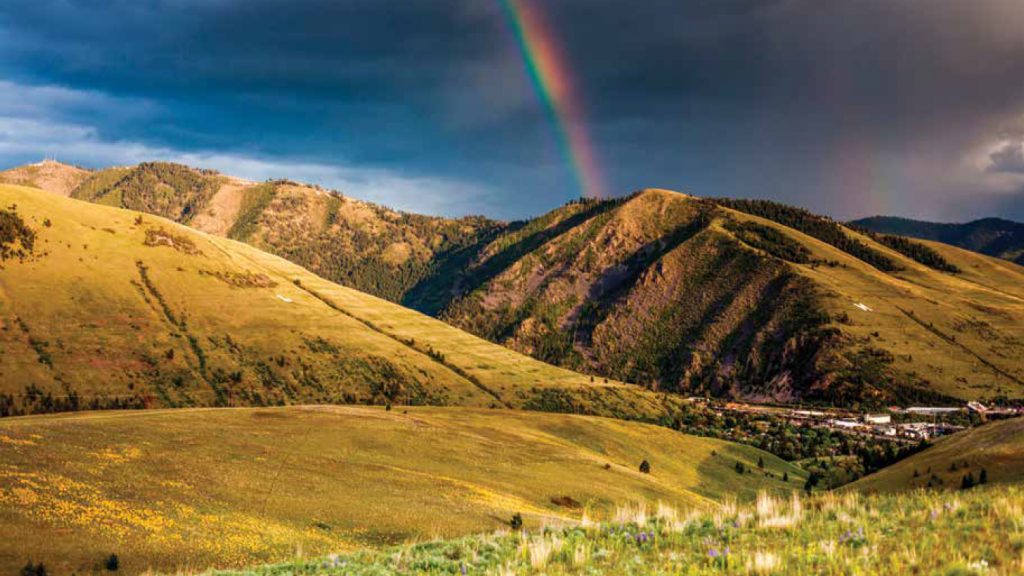 A double rainbow lights up the sky over the foothills surrounding Missoula, Montana, where nonnative weeds grow amidst native bunchgrasses and wildflowers.

For managers to make evidence-based decisions, they would need to understand more about how herbicides impact native plant and soil communities. Nelson decided to collaborate with land managers on several studies to increase knowledge on this topic.

Herbicides are chemicals designed to kill unwanted plants, originally in crop agriculture. They interrupt normal plant growth and can be classified as selective or non-selective. Selective herbicides kill either all broadleaf plants (dicots) or all parallel veined plants (monocots), for example grasses. In contrast, non-selective herbicides kill all plants they come into contact with, which includes both desirable and undesirable plants. One of these, glyphosate, is a chemical most commonly sprayed on wildlands, including forests, grasslands, and shrublands. Glyphosate is commonly used because it rapidly spreads through plant tissue, is cost effective, and degrades rapidly. Regulatory entities have concluded that glyphosate poses a low risk to wildlife; however, independent research has shown glyphosate is carcinogenic.

Agencies at the federal, state, or county level can designate a plant as “noxious” if it is considered “injurious to public health, agriculture, recreation, wildlife, or property.” National policies then require public land managers to regulate designated noxious plants, including in wildlands, and herbicides are a common treatment. For example, the National Park Service sprays to meet the management goal of maintaining historic ecosystem functions. Other agencies spray rangelands, highly trafficked areas such as along roads and trails, and areas burned by wildfires.

Even though agencies consider herbicides useful, there are unwanted side effects. Herbicides can kill both native and invasive plants, and spraying opens up the door for secondary invasion. For example, when managers spray knapweed, cheatgrass may aggressively colonize the area, even after native seed mixes are reseeded. Herbicides can also affect soil, water, and even human health. Given that these potential hazards are not fully understood, Nelson saw a need to gain a better understanding of how herbicides affect wildlands.

“Walking around Mount Sentinel, you can see areas that were sprayed for knapweed [that] now have cheatgrass,” Nelson explains. Nelson adds that, herbicides can be effective at controlling invasive plants. However, in many areas that are sprayed, weeds persist even after spraying. “Reseeding is one method to avoid secondary invasion. However, there is a research gap here.” 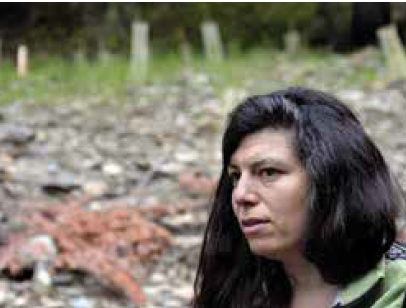 Cara Nelson, a researcher and professor of ecosystem science and restoration at the University of Montana, studies the effectiveness
of herbicide spraying and approaches to control invasive plants. (Photo by Linda Thompson/The Missoulian.)

She wondered how effective reseeding into soils recently sprayed with herbicides was, so Nelson and her Restoration Ecology Lab partnered with Morgan Valliant at Missoula County Parks and Recreation to study that question. The first study, led by Viktoria Wagner, a post-doc in the lab, uncovered that seeding immediately after spraying prevented the seeds of native species, both grasses and herbaceous plants, from germinating. A follow-up study led by Christine McManamen, a graduate student in the lab, showed that herbicides also have long lasting effects, decreasing seed germination up to one year after spraying. Seeds of some species were more sensitive to herbicides than others. Findings suggest the need to identify the sweet spot—seeding too soon will result in poor germination, while seeding too late misses the window of opportunity and permits secondary invasion. Nelson, Wagner, and McManamen published these findings in the journal Restoration Ecology in 2014 and 2018.

Leading up to this reseeding research, Nelson and Wagner collaborated on another study with Canadian researchers and land managers to assess knowledge about herbicide effects on native plants and the extent of herbicide spraying on public lands in North America. They reviewed articles on herbicide use and found most existing research looked at the effects on agricultural plants, not wild plants or soil organisms. The researchers found 40 publications on the oldest and most commonly used herbicide active ingredient, glyphosate, and far fewer on the effects of several of the next most commonly sprayed active ingredients. “That is very low considering how much we use these,” Nelson explains. Furthermore, in addition to few overall articles, Nelson and her team found that more than half of the published studies had design flaws. Their research did not stop there.

Nelson and Wagner, looking specifically at herbicide use in the United States, attempted to compile data from seven federal agencies that spray herbicides on wildlands. But they found that some agencies did not document their herbicide use. Only five tracked herbicide use on public lands, and only four of those—Bureau of Indian Affairs, Bureau of Land Management, Fish and Wildlife Service, and National Park Service—agreed to share their data. The Forest Service declined because of data quality concerns.

Furthermore, Nelson and Wagner’s analysis of the agencies’ data disclosed that land managers sprayed herbicides on 2.5 million acres of US federal and tribal wildlands from 2007 to 2011. The researchers conservatively estimated that in a single year, 2010, managers sprayed 1.2 million acres, an area the size of Delaware, with over 220 tons of herbicide, enough to fill two train tank cars. In 2017, the researchers published these findings in a Journal of Applied Ecology paper titled “Herbicide usage for invasive nonnative plant management in wildland areas of North America.”

Nelson’s findings about the volume of herbicides sprayed and the shortage of understanding about their effects highlight the need to better understand invasive species management on wildlands. Nelson suggests that managers “focus on the ecosystem as a whole rather than a narrow goal, such as removing a weed.” And, she proposes when they do spray herbicides, managers could do more to design effective monitoring programs to compare herbicide effects on control and treated sites. “The problem is not that there is not enough money for monitoring effects but rather,” Nelson says, that monitoring often fails due to poor experimental design. Effective monitoring requires planning how data will be analyzed, archived, and shared, and how the monitoring plan will be assessed, prior to implementing herbicide treatments. This is the foundation of evidence-based management, which requires a systems-thinking approach with broad goals. “When we manage for ecosystems, we have to manage that complexity,” Nelson says.

Lauren Dunn graduated with a bachelor of science in resource conservation from the University of Montana and has worked as a field botanist on various endangered species habitat monitoring projects all over the West. She is interested in the interface of human-land relationships.