The four members of Gordon Custer’s research group gather around as he walks through the steps of data collection. It’s a sunny June morning at a test area in the High Plains Grassland Research Station outside of Cheyenne, Wyoming, and Custer and the lab members have donned sunglasses and ballcaps to block the sun’s rays. 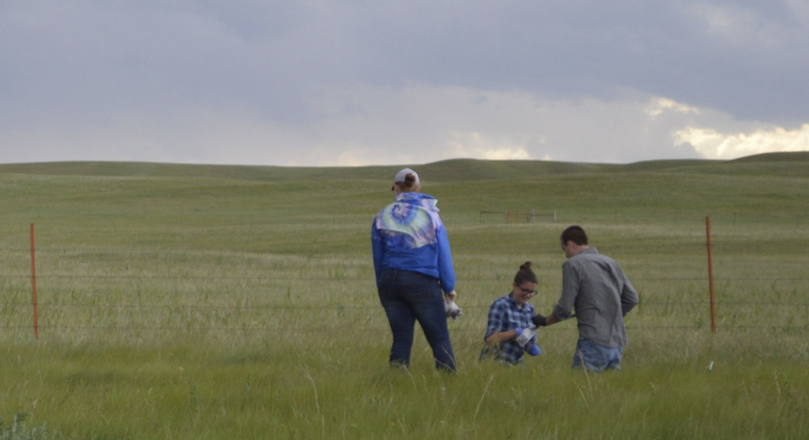 Custer, a University of Wyoming PhD student in ecology, demonstrates how to toss a placemat-sized white plastic square made of tubing, use a tablet to take pictures of it, catalog the plant species within it, and then extract three soil core samples. He places the soil samples into a small plastic bag called a “Whirl-Pak,” because, to seal it, he must whirl the pack over itself several times, similar to wringing out a towel.

A team member sanitizes the soil core sampler with a blowtorch and ethanol before tossing the white square to another place in the plot, one of 84 individual subplots within the research area. Once he’s certain the research team has got the hang of it, Custer retreats from the test plots to set up his workstation.

“If anyone has any questions, don’t hesitate to ask,” he tells the lab members, and he tells me, “If you need anything give me a shoutout, but otherwise I’m going to be in field work mode.”

The group needs to gather 211 individual Whirl-Paks from the research plot, and the weather forecast calls for rain in the afternoon. Any samples that get wet would differ from the other samples, throwing off the data set. It’s an ambitious goal for one day, and they’re racing against the weather.

“I need a third hand,” Custer laments, as he meticulously repeats the steps to process each of the Whirl-Paks.

The group is looking for microbes—microscopic organisms including bacteria and fungi. While they are invisible, microbes play a crucial role in a healthy ecosystem. They cycle nutrients, breaking down compounds into forms that other organisms, such as plants, can use. Custer says many plant species flourish in the presence of compatible microbe communities, and vice versa.

Disruptions—such as wildfires, development, and invasive species—can easily upset microbial communities, throwing the ecosystem out of balance. Learning how disruptions impact microbes can help researchers get a handle on how to return ecosystems to their pre-disruption state. Custer plans to do just that, by homing in on how invasive plant species impact microbial communities. Custer says, in the future, his work could create new strategies for managing invasive species.

The research Custer and his lab are conducting is part of a larger microbial research effort at UW funded by a National Science Foundation grant totaling $20 million over five years. The goal is to gain comprehensive understanding of microbes in Wyoming. Currently, very little is known about the distribution of microbes across the state, or what happens when that is disturbed.

How do you survey microscopic organisms? Linda van Diepen, UW assistant professor in the Department of Ecosystem Science and Management and Custer’s PhD advisor, says that while researchers won’t ever see the microbes in their soil samples, they can look for markers of microbial communities. Microbes excrete enzymes to break down food—like dead grass—into components small enough for them to consume. As they do this, they also change the nutrient concentration in the soil. Researchers can analyze the enzymes, nutrient concentrations, and the microbe’s own DNA to identify which ones are present and how they are functioning.

While they are vital to a healthy ecosystem, little research has been done to discover how microbes, as an integral part of an ecosystem, interact with invasive plant species.

“These invasive plants invade a system and they alter nutrient cycling, alter below-ground interactions,” Custer says. “These impacts [could] last long after the plants have been removed.”

Custer is working on three projects focused on the interactions between microbes and invasive species. At the site near Cheyenne, Custer and his group are working in a plot treated with an herbicide a year and a half earlier.

“Invasive plants kind of diverge the microbial community away from the native state,” Custer says. “When you spray herbicide on it, you may be furthering it away from its native state and imposing additional hurdles to restoration.”

Custer’s lab, two teams of two, bring him the Whirl-Paks as they finish with each subplot. He breaks up the soil cores, which look like brown apple cores, in the Whirl-Pak and shakes up the soil. He then uses metal instruments to take small amounts of soil and place them into two different tubes, one with a potassium sulfate solution, and a “bead tube” filled with small purple beads. The soil analysis will hopefully yield information about the microbes present in the herbicide treated areas to discover whether herbicides disrupt the microbial community and how.

To study this, Custer grew native plants in pots for 12 weeks. He then harvested the native plants and re-planted the pots with Russian knapweed, an invasive species, which grew for 12 weeks. Finally, he harvested the invasive plants and re-planted the pots with the native species. Custer examined the microbial community at every step of the process.

The third project is a general survey across the entire state of Wyoming to compare microbe communities in native, uninvaded prairie with places where cheatgrass has invaded. Van Diepen says the initial survey of Wyoming will help determine which microbe species are present in uninvaded prairie versus invaded prairie. Custer worked with Wyoming Weed and Pest as well as UW Extension to survey 10 to 15 sites across Wyoming. 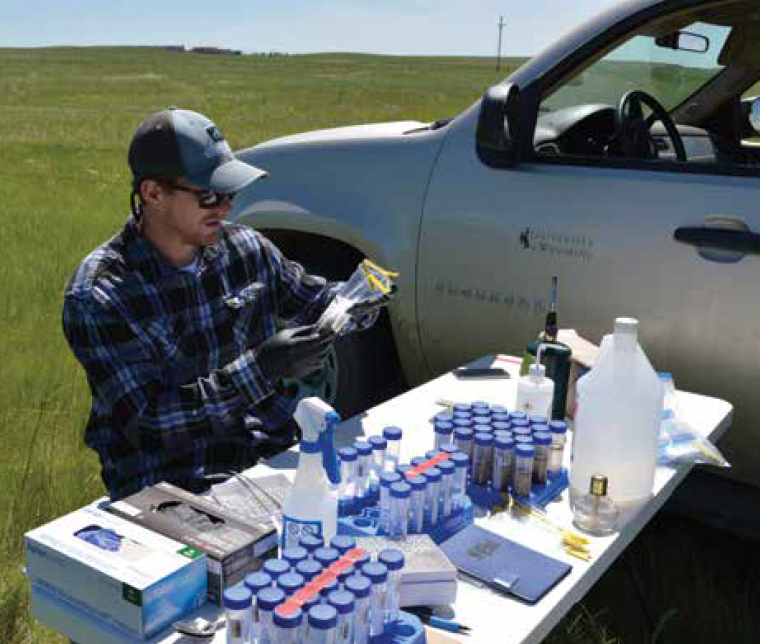 Gordon Custer, a PhD student in ecology at the University of Wyoming, processes soil samples at the High Plains Grassland Research Station outside Cheyenne, Wyoming. (Photo by Sara Teter.)

“A lot of work is still needed on that front, and it is not a silver bullet,” he says. “But it is a potential avenue for development.”

Custer’s projects, as well as the others under the NSF grant, will lay the foundations for future microbial ecology research in Wyoming and beyond. Custer says being able to take part in a project this size with so many people involved feels like a once-in-a-lifetime opportunity.

“The breadth, the knowledge that is working on this is crazy,” Custer says. “You have biogeochemists, microbial ecologists, computational biologists, statisticians, GIS people…it’s pretty cool, the interdisciplinary research and collaboration.”

In the research plot, Custer’s group stands around his workstation as he processes the few remaining Whirl-Paks. The clouds have turned a dark, gloomy purple and the wind has picked up. The rain is coming. In the semi-arid climate of Wyoming, Custer says there is a “pulse” of microbial activity after a wetting event like a rainstorm.

Custer twists the lid on the last tube, as the groups loads their materials into the UW van. One student slams the trunk shut, and the volunteers pose for a picture—a souvenir of a successful field day. The phone camera flashes, and the rain starts to come down.

Text and photos by Sara Teter

Sara Teter was the summer 2019 Science Journalism Intern for the Ruckelshaus Institute and a graduate student in the Communications and Journalism Department at the University of Wyoming.