Imagine the old green fertilizer spreader you haul out every spring to urge your tired lawn back to greenness, but much bigger and suspended from the bottom of a helicopter. 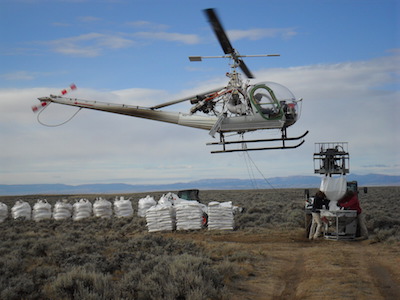 That was the scene in 2010 and 2011, when helicopters dropped pelleted urea—a solid form of nitrogen—on 1,500 acres of the flanks of the Pinedale Anticline, a formation in western Wyoming where thousands of mule deer hunker down in the winter.

The hope is that nitrogen fertilizer will grow bigger, better sagebrush to feed wintering mule deer. That’s important because the deer population on the Pinedale Anticline has declined by 44 percent, down from about 5,200, in the last decade as natural gas development stretched through the heart of the winter range. The federal authorization of that gas development stipulated that if deer numbers fell below a certain threshold, managers would be required to improve habitat near the project area before looking to off-site remedies.

Hence the helicopter, part of a pilot study to test whether fertilizing sagebrush could help the deer population. A group of UW scientists (the author included) dug into the question of whether such a plan could work. Can fertilizer grow more sagebrush? And if it does, will that grow more deer?

To answer those questions, we dusted off early range studies, scrutinized the latest science on mule deer nutrition and soil science, and built a nitrogen budget to track nitrogen movement through the sagebrush ecosystem.

The notion of fertilizing rangelands is not new. Range scientists in the 1960’s and 70’s first tested the idea in greenhouses with mixed results. Those early studies found that sometimes fertilizer can increase the length of leaders, the succulent new growth at the tips of Wyoming big sagebrush twigs. But only sometimes. Depending on the time of year, the amount of precipitation, and other unknown factors, fertilizer can cause anything from zero to 100 percent more annual growth compared with unfertilized plants. In dry years, when sagebrush offers the least to wintering deer, fertilization effects are the lowest. Even when fertilizer does cause more sagebrush growth, it has to be reapplied annually to maintain the effect.

Studies show less promise for improving the quality of sagebrush. While fertilization may cause a pulse of higher protein content in sagebrush leaves right away, that bonus is lost by fall when mule deer arrive on winter range.

The limited benefits of sagebrush fertilization are tempered by the risks. On the Pinedale Anticline, 40 pounds of urea were added per acre. That as much as quadruples the natural rate of nitrogen in the ecosystem. To understand the risks, we followed that extra nitrogen to all the places it winds up besides sagebrush.

Once it hits the ground, urea is converted into nitrate, a form that plants can take up. Along the way, secondary gases volatize off and float into the atmosphere. These include nitrogen oxide, which is both a precursor to the polluting ground-level ozone that has plagued the Pinedale area in recent years and a regulated compound in its own right. Conversion of urea also releases nitrous oxide, a potent greenhouse gas that also depletes beneficial stratospheric ozone. Another byproduct is ammonia gas, which can spread downwind toward the Wind River Range, causing nitrogen deposition in streams and lakes.

Urea components can make it directly into nearby water bodies as well. Excess nitrogen fertilizer in streams, lakes, and aquifers causes eutrophication—a burst of aquatic plant life whose decomposition uses up oxygen necessary for animal life. This and a host of related side effects, more typical of industrial landscapes and intensive agriculture, are well documented.

When we fertilize our lawns, we grow dandelions as well. So too in rangelands—weeds can outcompete sagebrush for the extra nitrogen. Cheatgrass, an uncontrollable invasive weed that increases fire frequency in ecosystems, thrives when fertilized in other ecosystems (effects of fertilization on cheatgrass are little studied in sagebrush steppe). As it spreads and flourishes, it can choke out native grasses, wildflowers, and other plants wildlife relies on. While nitrogen’s beneficial effect on sagebrush leaders is temporary, it paradoxically sticks around in the soil for years, precipitating changes in the plant community long after application.

The risks associated with excess nitrogen are scalable. Fertilizing test plots for a pilot study doesn’t pose much of a problem, but it might on much larger acreages. The Bureau of Land Management has authorization to fertilize more than 30,000 acres of public lands in the Upper Green River Basin, although at $55 per acre it’s unlikely to fertilize all of that. Managers are considering fertilizing deer winter ranges elsewhere, including around the Continental Divide-Creston natural gas development near Rawlins, Wyoming. If large sagebrush landscapes are fertilized annually the side effects are worth considering.

We combed through a lot of studies to arrive at the less-than-satisfying answer of “maybe” to the question of whether fertilization can help mule deer. But at what cost? In this case, the many and long-understood risks of nitrogen probably outweigh the benefits of fertilization, which are uncertain, transitory, and expensive.

For now, the BLM has tabled its plans to fertilize sagebrush in the Pinedale Anticline. Results of the pilot study didn’t provide much support for fertilization either.

But the story isn’t over. As the U.S. continues to develop its reserves of clean-burning natural gas, sagebrush steppe will be affected. The need for innovative methods to protect and enhance wildlife habitat will only increase. If fertilization isn’t the answer, what is? It’s easy to suggest that one idea won’t work and much harder to come up with something better.