It was going to be a routine mule deer study. The Bureau of Land Management contracted Hall Sawyer, a research biologist with Western Ecosystems Technology, Inc., to study mule deer movements in southwest Wyoming’s Red Desert. The conventional wisdom at the time said the deer spent the entire year in the Red Desert, and Sawyer expected to document a variety of short movements in the area. In January 2011, he trapped forty mule deer and outfitted them with GPS collars and VHF radio transmitters. That spring, an airplane pilot flew over the Red Desert to check on the deer, but they were nowhere to be found. 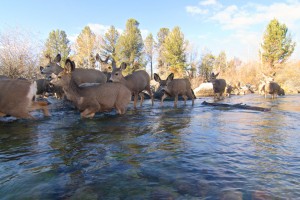 Mule deer cross a lake outlet during their 150-mile-long fall migration from the Hoback Basin to the Red Desert. Photo by Joe Riis.

I met Sawyer in downtown Laramie at the Front Street Bar to hear the story of the missing deer. He had spent the day near Pinedale counting mule deer from the seat of a helicopter. His face was tan from research days in the field. We ordered beers and sat down.

When he first realized the deer were missing, Sawyer said, he worried that the collars were faulty, or had been programmed incorrectly. On a hunch, he asked the pilot to keep searching for signals along the Wind River Range on the way back to Pinedale at the end of the day. Near Pinedale the VHF radio transmitter started to beep. The pilot had found one of the missing deer a staggering 100 miles from the winter range, and he soon picked up more signals.

After the initial relief of finding the deer wore off, Sawyer started scratching his head. What were these animals doing so far from home? “That was one of the toughest winters we had had in decades,” Sawyer explained, “So we thought, well, maybe it was a fluke.” He wondered if the collared mule deer were actually from the Pinedale area and had traveled to the Red Desert to escape the harsh winter. If so, these animals might not return to the Red Desert the following winter.

“So we waited a year, and sure enough, all of those animals came back to the desert, and that’s sort of when we knew, holy cow, they really are traveling that far!” He had stumbled upon the longest documented land migration in the lower 48 states.

The results of this cutting-edge GPS technology, now used throughout the world, are often surprising. In general, animals move further and more frequently than ever imagined, and the Red Desert mule deer are no exception. As scientists reveal animal movements and migrations, conservationists and land managers are racing to respond to this new information. Sawyer’s discovery, and efforts he has put into sharing that discovery with the public, is paving the way for a new era of landscape conservation.

After three years, Sawyer retrieved the collars and downloaded the data. The GPS waypoints revealed the mule deer movements, delineating a narrow corridor stretching from the Red Desert east of Rock Springs to the Hoback Basin 150 miles to the northwest. An estimated 500-1000 deer leave the desert each year and join another 4,000 deer at the base of the Wind River Range. From there, mule deer navigate highways, hundreds of fences, rural housing developments, and rivers to make this journey.

Sawyer, who has published peer-reviewed articles on ungulate research for the past fifteen years, decided to take a new approach with these findings in hopes that his discovery of this unusually long migration could help raise awareness of the challenges with conserving migratory deer in the West.

To start, he teamed with longtime friend and National Geographic photographer Joe Riis. Sawyer and Riis flew the route to scout the challenges these deer face. Then Riis set up motion-sensor cameras that captured images and videos of the deer crossing fences, rivers, and vast landscapes. He also shot aerial images and video of the migration route.

Meanwhile, Sawyer partnered with the Wyoming Migration Initiative, a University of Wyoming organization that conducts big game migration research and communicates it to a broad audience. To reveal the mule deer journey to the public, WMI created a written assessment of the migration, a short film, a traveling photo exhibit, and public talks throughout Wyoming. The assessment uses photographs, maps, and writing to describe the migration route in detail, identifies the “top 10 areas of concern” for conservation, and spells out management considerations to guide land-use planning and conservation efforts. The short film, which has reached over 3 million views online, gives close-up glimpses of the mule deer moving through the landscape, to raise awareness of the migration and its conservation concerns. Sawyer, along with Riis and Matt Kauffman, director of the Wyoming Migration Initiative, talked to the public and showed Riis’s photography and short film in Laramie, Rock Springs, Lander, Jackson, Pinedale, and Cheyenne, sharing the story of the migration with hundreds of people across the state.

“My role, or what I hoped for this,” Sawyer told me, “was to start a conversation about migration and just provide the science for that particular migration in a clear way that gets managers and different stakeholders thinking about it.”

Why should people care about migration? Of the big game in Wyoming, over 90 percent are migratory. Migration allows animals to escape deep snow in the winter and find the most nutritious forage in the spring and summer. Without migration, Wyoming’s arid landscape could not support the same numbers of big game. Research suggests that if migrations disappear, the animals that rely on them will begin to disappear as well, and scientists have shown that migrations around the world are in decline.

Corridors such as the Red Desert to Hoback cut across a patchwork of private, state, and federal lands, each with their own host of challenges. To succeed, any conservation strategy will have to engage a broad group of stakeholders, including landowners, sportsmen, industry, agencies, and conservationists.

“These sort of spectacles are one of the things that makes Wyoming one of the truly wild places left in the West,” described Kauffman. “Our research is allowing us to look into the future,” he continued, “and that work suggests that these migrations are going to get harder unless we are proactive in how we are managing them.”

The Wyoming Migration Initiative’s efforts are beginning to work. Of the top ten concerns identified in the assessment, three are already being addressed. The Wyoming Department of Transportation lowered the top wire of the right-of-way fence along Highway 28 to make it easier for the deer to leap over. The Wyoming Game and Fish Department modified fence jumps (drop-offs that allow big game to jump into, but not out of, fenced areas of land) once too high for mule deer. And the Conservation Fund is close to purchasing a critical piece of land where deer swim the outlet of Fremont Lake, the area of most concern. The Wyoming Game and Fish Commission voted to invest $250,000 to help with the purchase. The Conservation Fund aims to permanently protect this narrow passageway.

What about the rest of the top ten concerns? Several agencies and NGOs have partnered to tackle management options surrounding the Red Desert to Hoback migration corridor. In January, over thirty people, including many state and federal agency representatives, met for two days to walk through WMI’s assessment and share information and ideas. In Sawyer’s words, “that’s a pretty big deal. We haven’t seen anything like that before for a migration route.”

Sawyer, Kauffman, and the others at the Wyoming Migration Initiative are capturing imaginations and helping people understand the science of migration. But conservation and research efforts around big game migration won’t end with the Red Desert to Hoback migration. Sawyer hopes the conversation will continue with shorter migrations that are “just as important or valuable regionally as these long distance migrations. If we want to sustain our big game herds, then we’ll need to pay some attention to all of them…not just the ones that migrate really far.” Ultimately, the fate of this migration, and other migrations like it, is up to land managers and the public to decide. The Red Desert to Hoback migration is just the beginning.