Bighorns Back from the Brink

Science and the recovery of an alpine specialist

It was shaping up to be a brutal winter. We already had quite a bit of snow in the alpine in late October of 2016. Then, in mid-December it really started dumping. As one atmospheric river after another arrived off the Pacific Ocean, the snow piled up—40 feet by early February. I hoped avalanches would not wipe out some of our smallest bighorn sheep populations. 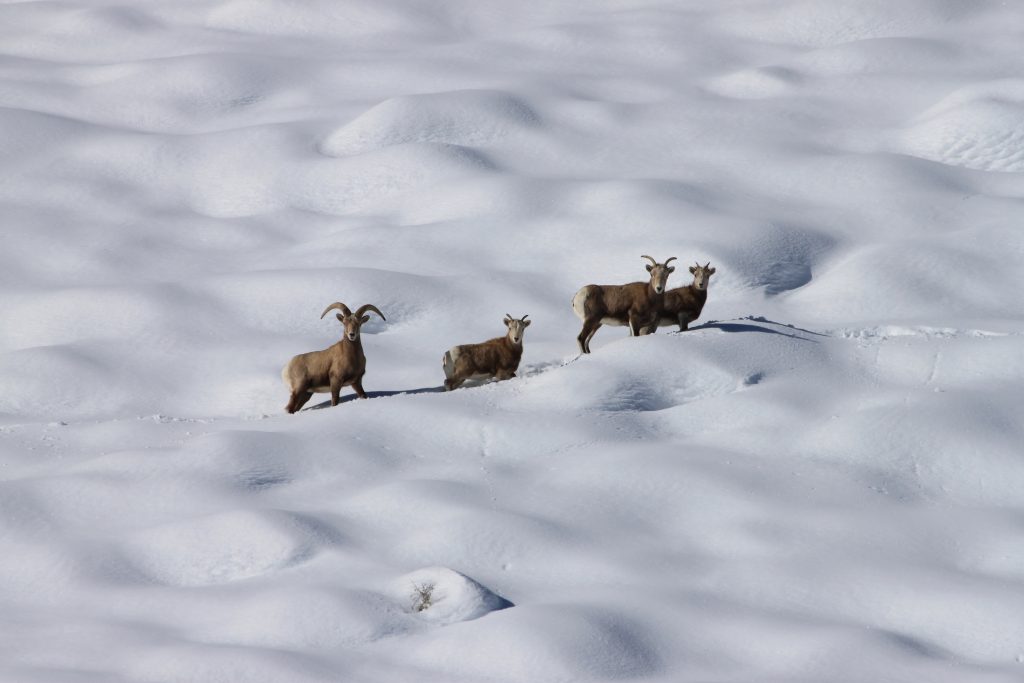 The Sierra Nevada is a rugged mountain range that lies almost entirely within California. It contains the 14,505-foot Mount Whitney and some of the most extensive roadless wilderness in the lower 48 states. These mountains once supported a thriving population of bighorn sheep that are genetically unique from other members of the species. Like bighorn sheep throughout the West, the Sierra Nevada population declined following the arrival of European settlers who brought disease in domestic sheep and unregulated market hunting. The subspecies known as Sierra Nevada bighorn sheep was close to extinction in the 1990s when the entire population numbered just over 100 animals, and it was listed as federally endangered in 2000.

I joined the recovery effort for Sierra Nevada bighorn in 2001 and now run the program for which the California Department of Fish and Wildlife is the lead agency. Our job is to implement a recovery plan prepared by scientists, agency personnel, and members of the public. The plan serves as a road map, with the goal of recovering the species to 305 adult and yearling females distributed among 12 populations.

Compared to many endangered species, bighorn sheep have been well studied, and the plan was based on the best available science at the time it was written. But the more we learn through the science of the bighorn sheep recovery program, the more we’re surprised by their ecology. Those surprises have prompted us to modify our recovery approach. The journey has shown us that recovering a species is not as straightforward as preparing a recovery plan and adhering to its initial recommendations. With each new ecological discovery, we adjust our recovery actions in accordance with the emerging science.

For instance, our understanding of the relationship between migration and survival has evolved over the past decade. Scientists had assumed that Sierra bighorn must migrate to lower elevations during the winter to avoid deep snow and meet their nutritional needs. But whether all sheep actually migrate and what habitats provide the best forage for rams and ewes was unknown until just recently. Answering these questions would be key to managing the species back from extinction. So we began monitoring bighorn sheep populations with GPS collars that show us where animals spend their time. What we found surprised us. Some animals weren’t migrating at all—they were wintering high in the alpine where huge amounts of snow and scarce forage make survival seem impossible.

To investigate how some bighorn sheep could remain at high elevations year-round, I began skiing into the mountains in 2002. During some trips, the wind was so strong it could knock you down. But the wind was the secret to sheep survival at high altitude. There could be 20 feet of snow at 10,000 feet but no snow on a wind-swept ridgeline at 12,000 feet, where bighorn sheep could stay through the winter. At that elevation, food is sparse and spring arrives late. In contrast, for sheep that winter at the base of the mountains, snow conditions are comparatively mild and more nutritious forage is available. But bighorn that winter down low are at much greater risk of predation by mountain lions. Sheep that winter in the alpine trade off forage quality for freedom from predation.

I wondered how sheep could survive harsh alpine winters with less forage, so I used ultrasound during our captures to measure body fat in animals across a range of habitats and seasons. I found that bighorn survive winter in the alpine by storing large amounts of fat during summer. They essentially hibernate standing up, living off fat during the winter and conserving energy. Now that we know bighorn can comfortably survive winters on mountaintops with limited forage, we have a new understanding of winter habitat. 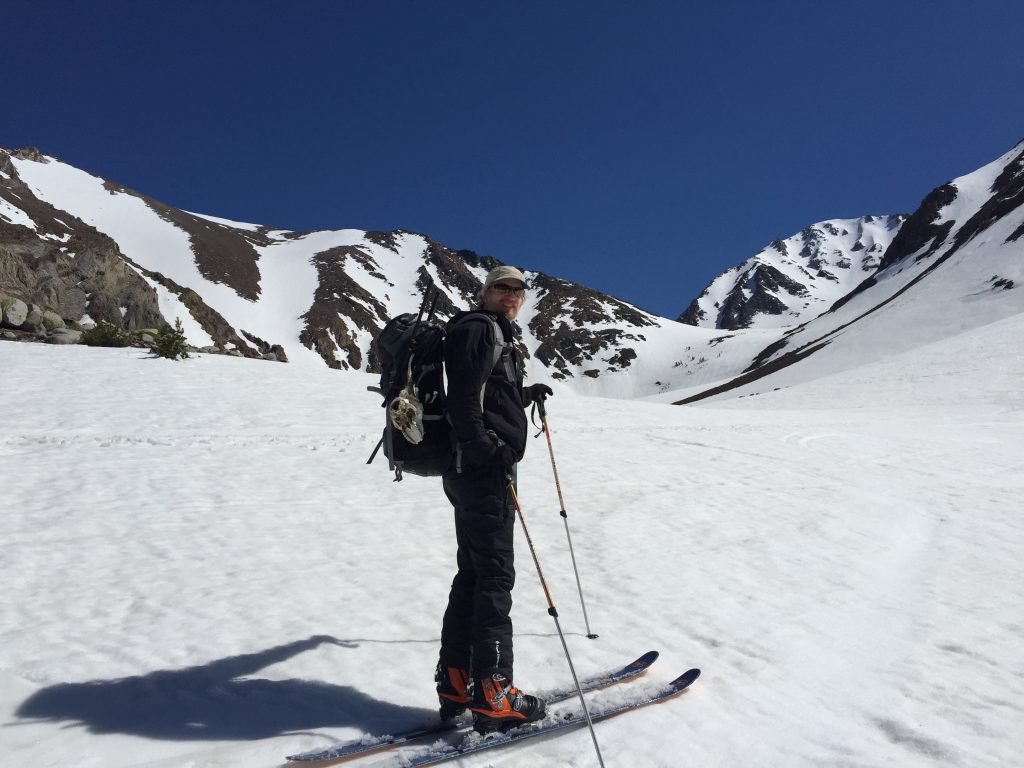 The complexity of ecological relationships grows as we scale our perspective from individuals to populations. Although Sierra bighorn are adapted to a harsh winter environment, wintering in the alpine isn’t always the best strategy. Whether to stay in the alpine or brave mountain lions lower down, for example, depends on winter severity and predation risk in any given year. In drier years, animals that winter high have greater survival, but in very heavy snow years those wintering high can starve. In those snowy years wintering low provides access to forage that may outweigh the risk of being eaten by mountain lions. Choosing the wrong strategy can mean death, but large, healthy populations have enough animals to support multiple strategies.

Population models are one of our most robust scientific tools in ecology; we use them to tell us how small is too small. We feed the data that we gather from collars and surveys into models that predict whether a population or the entire subspecies will persist. The models incorporate the variation we observe in survival and reproductive rates and assess the likelihood and consequences of catastrophes. We can model how mortality rates compare among populations with different migration strategies and how the species responds to variation in climate and habitat changes following wildfire. We can calculate how long it will take a small population to recover from a severe winter, or how many animals we can safely remove from a larger population to augment a small population that is struggling.

The models tell us that when populations are small, random events such as big snow years become catastrophic. Fortunately, our reintroduction efforts expanded Sierra bighorn distribution from three populations in the 1970s to 14 by 2015, though we still didn’t have enough adult and yearling females in those populations to call the species recovered. The expanded distribution means catastrophic events are less likely to affect all populations of Sierra bighorn and the subspecies is more likely to persist.

If I were writing this article a year ago, I would have noted the speed at which we were approaching recovery. But by the end of last year’s severe winter, we estimated the population of Sierra bighorn had declined by at least 20 percent. Still, I was relieved that at least some animals in all of our populations survived such an extreme winter, and I continue to be amazed at how tough bighorn sheep are. Depending on future weather patterns and other threats, the population may rebound quickly or recovery could be delayed for years.

Bighorn sheep recovery also tells us that science is a process and not an answer. Species evolve over millennia—it shouldn’t be surprising that it takes time to fully understand their ecology. We must move forward with incomplete knowledge about the species we are managing and be ready to shift course as we learn more or conditions change. Endangered species need oversight and assistance until we are confident that they will persist on an ecological time scale—that requires sound science and patience. Like bighorn sheep themselves, the science is evolving.

Tom Stephenson, PhD, is a senior environmental scientist with the California Department of Fish and Wildlife, and program leader for the Sierra Nevada Bighorn Sheep Recovery Program.