In From the editor

Coal powers America. Or at least it has for the last sixty years. For most of the last century, anywhere from 45 to 55 percent of US electricity came from coal. And since the 1990s, about 40 percent of that coal came from Wyoming’s Powder River Basin, home to eight of the country’s ten biggest coal mines, including the North Antelope Rochelle Mine, the largest coal mine in the world. In 2008, at the peak of production, dozens of mile-long coal trains left the Powder River Basin every day, headed for power plants in more than 30 states.

Now the country’s energy portfolio is shifting. In 2008, US energy demand leveled off and has been mostly flat ever since. And by 2016, only 30 percent of US electricity came from coal, surpassed for the first time by natural gas, which provided 34 percent of the nation’s electricity. In 2016 the US produced less coal than any year since 1978. Wyoming’s production dropped more than 20 percent from the previous year, sinking to less than 300 million tons for the first time since 1997.

This issue of Western Confluence, our energy issue, is motivated by that abrupt shift in the nation’s energy portfolio. What’s behind these changes, and what will our future energy landscape look like? Coal’s decline is driven by a range of factors, from citizens installing increasingly affordable solar power systems on their rooftops, to state officials requiring utilities to replace polluting coal with clean renewables, to federal policies limiting the emissions from coal-fired power plants. Technological advances are bringing down the cost of wind turbines, while a glut of domestic natural gas offers a cheap energy source. These many bottom-up and top-down forces complicate the energy story. 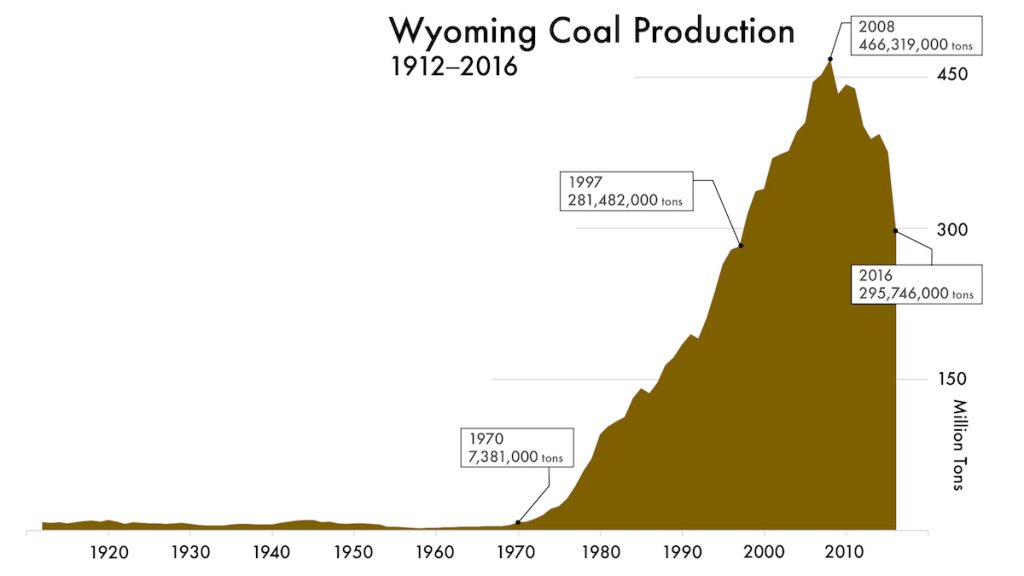 Data from the Wyoming Mining Association and the Mine Safety and Health Administration.

Considering such complexities, this issue has been challenging to put together. Some premises that seemed firm last August when we began working on this issue have turned upside down in the months since. But a few things remain true. States, through their own policies, have a strong say in how energy development moves forward and can drive regional energy trends. And the market is one of the strongest forces shaping the energy landscape. As westerners, it’s in our interest to take a clear-eyed view of this shifting energy landscape and try to understand what forms it might take in the coming years and decades. We hope this issue of Western Confluence will help you understand our changing energy world.

Leave a Reply to Ted Lapis