I swished my dipnet through water and vegetation at the edge of the beaver pond, creating swirls of mud that obscured the bottom. Lifting the net created a moment of suspense. I sorted through pebbles, aquatic plants, caddisfly cases, and the occasional minnow, hoping to spot a tadpole. I’d been zigzagging and dip-netting through waist-high grass, dense willows, and standing water all morning. No luck.

Then, as I shook pond detritus from the net, I heard a shout of glee. In the stream at the foot of a beaver dam, my husband, Jerod, grinned wildly and held up a net oozing mud. In his grasp was the first salamander either of us had seen in the wild. The catch was exhilarating, but we weren’t out there just for fun. We were collecting data on sensitive, hard-to-track species and helping change the paradigm of how long-term amphibian monitoring and conservation is done throughout the Mountain West.

In 2006 the US Fish and Wildlife Service considered a petition to list western populations of the northern leopard frog as an endangered species. The agency needed population information, but Wyoming was a bit of a blank. Zack Walker, then the state herpetologist, remembers, “When we started going back through our data, we realized we didn’t have anything.” He found only a few studies, and they were limited in geographic scope and lasted no more than two to three years, too short to determine whether a population is in decline. Reinforcement came in 2008, when the Wyoming Natural Diversity Database (WYNDD) hired Wendy Estes-Zumpf as a staff biologist, and she took over their amphibian projects. She was “just shocked,” she says. “We knew hardly anything about the populations, not even where some of them did and didn’t occur.”

So, Estes-Zumpf and Walker got to work surveying the Bighorns and other mountain ranges across Wyoming. They figured out which species were present there, but they were nowhere close to understanding population trends statewide. In 2011, the duo partnered with three national forests: Wyoming’s Medicine Bow and Bridger-Teton, and the Routt in Colorado. For the next two years, biologists and technicians with the partner agencies surveyed amphibians. But when Estes-Zumpf calculated the minimum data needed to detect trends in state amphibian populations, she found more areas would need to be surveyed “than the Forest Service could reliably fund every year, even with help from WYNDD and Game and Fish.” 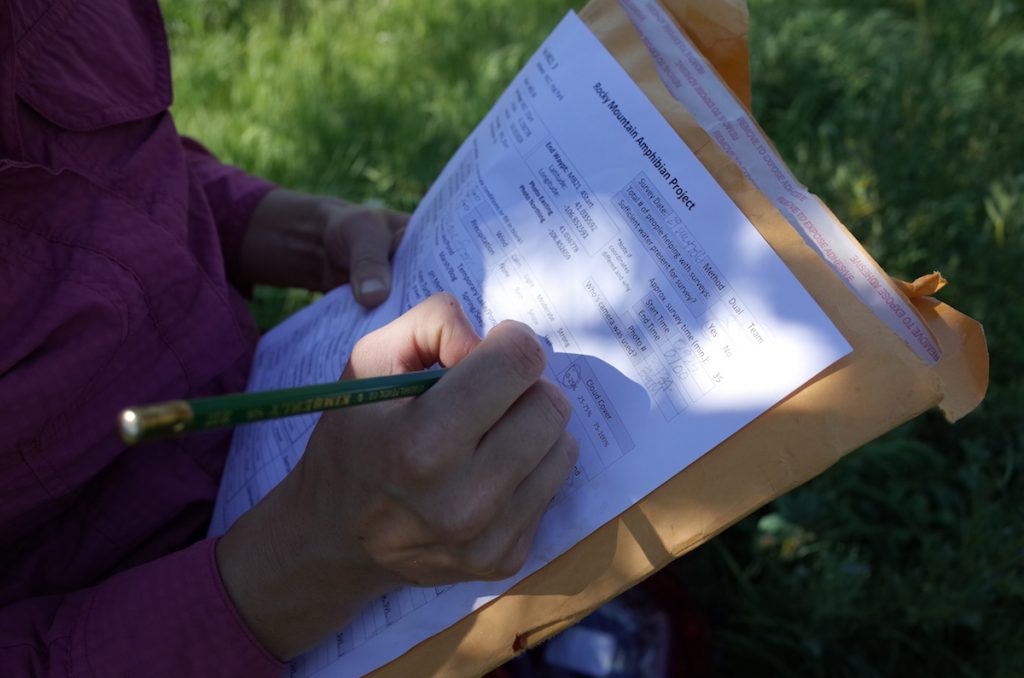 Then came a happy accident. In late 2012, Estes-Zumpf gave a presentation about the project to the Wyoming chapter of The Wildlife Society and made a plea for more agency volunteers. She recalls that Carlos Martinez Del Rio, director of the then freshly minted Biodiversity Institute (BI), “comes running over in the dark, crouches down right next to my chair as the next speaker starts. And he says, ‘We need to talk. This is a great flagship project for the new BI.’” He thought citizen volunteers could be recruited to help collect data.

This was a new idea for Estes-Zumpf. Volunteers might bolster much needed data collection efforts without costing a lot. If the idea worked, the BI would have a compelling science education and outreach project and WYNDD, and Game and Fish would have enough data to monitor population trends.

Thus, out of a combination of inspiration and desperation, Walker and Estes-Zumpf teamed up with the BI to create the Rocky Mountain Amphibian Project (RMAP). Citizen science, which has gained momentum over the past decades, entails members of the general public collaborating with professional scientists to collect or analyze nature-related data. In the case of RMAP, volunteers collect the same data as biologists and technicians, despite far less specialized training or experience. 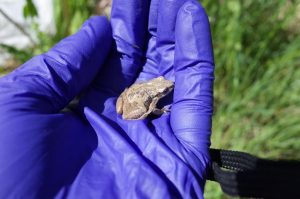 In most such projects, a key individual connects public volunteers with the science. When RMAP started, that was Brenna Marsicek, Outreach Coordinator at the Biodiversity Institute. Hers was no small task. She was a media wrangler, a social media strategist, a website designer, and a volunteer recruiter. With plenty of space to experiment and dream, Marsicek and Estez-Zumpf asked for a lot of advice and invented as they went along. “Brenna and I have run ourselves ragged,” Estes-Zumpf says, “but we both love the project.” Their enthusiasm rubs off on volunteers. In 2016, citizen scientists comprised 90 percent of the people collecting data. Dozens of volunteers from across Wyoming sign up each year, for two main reasons. Marsicek says, “It’s just fun. It brings out the kid in you.” And Estes-Zumpf has heard from many of the volunteers who return that they appreciate “that they are doing real hardcore scientific surveys.”

That’s why Jerod and I signed up in 2015. We were curious about amphibians, and both of us had worked on other field research projects in the past. We jumped at the opportunity to learn more by contributing to RMAP. At our full-day training in May, Estes-Zumpf introduced us and about twenty other volunteers to our target species and the data collection methods we would use. We started in a classroom and concluded with a couple of hours stalking loudly mating frogs in a pond brimming with their egg masses. We were hooked.

We spent a Saturday in June and again in July surveying a catchment—a designated survey area comprising prime amphibian habitat—in southern Wyoming’s Sierra Madre. That season, the survey involved working uphill from some old, grown-in beaver ponds, along a slender rocky creek, to another set of inactive beaver ponds. The next summer we returned for two more surveys in another catchment containing active beaver ponds, tiny streams, a spring seep on a hillside, and a lot of wet meadows. We started our surveys around eight o’clock in the morning, and finished in four to six hours. We were looking for six species: tiger salamander, boreal toad, northern leopard frog, wood frog, Columbia spotted frog, and boreal chorus frog. The general idea is to check likely amphibian habitat at 24- to 30-foot intervals. And so we spent the day whipping dip nets back and forth to create vortices, which slow and disorient amphibians, making it easier to scoop them from the now-opaque water. Outside of standing water, we crept along slowly, trying to spot adult frogs and toads. Weaving across the catchment, we watched the grass for leaping shadows. Most of the adults we found were small and dark enough to seem like they morphed out of the mud and clumps of grass we disturbed. 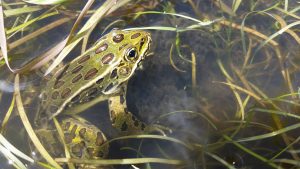 When Jerod netted that tiger salamander, morning light caught its skin and its holographic stripes flickered. Jerod held it near its armpits, trying not to drop or crush it. He wore pistachio-colored latex gloves to protect the animal’s slippery skin from sunscreen, bug dope, and the oils on human skin. The gloves contrasted against the salamander’s olive-gray body. Its protruding eyes cast shadows toward its nostrils. Its mouth seemed set in a perpetual smirk. I took a couple of photographs, then ran a cotton swab across the insides of its legs and dropped the swab into a pinkie-finger-sized vial of ethyl alcohol. Estes-Zumpf would send that swab to be tested for chytrid, a fungus devastating amphibians across the continent. Then Jerod eased the salamander back into the murky water while I marked our location with a GPS. As he shook loose the mud and debris in his net, I pulled out the RMAP data sheet. I jotted down the salamander’s age (adult), location, and the local habitat (perennial stream).

Downstream, it was my turn to whoop, as I fished out two salamander tadpoles with fringed algae-green gills forming translucent manes around their necks. Young salamanders mean evidence of breeding, suggesting a viable population. We identified these as tiger salamanders, the only species of salamander in Wyoming.

Later, I caught some frog tadpoles. They were too small for me to determine their species. Following protocol, I dropped one into another vial of ethyl alcohol, to return to Estes-Zumpf. 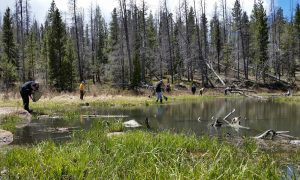 Unidentifiable specimens are just one of the unknowns Estes-Zumpf has faced since founding RMAP. More challenging are the questions that don’t have straightforward answers. What if registered volunteers don’t show up? Or don’t come back year after year? Above all, what if the data volunteers collect isn’t good enough?

Volunteers are cheaper than hiring additional employees, but ineffective training, insufficient attention to detail while surveying, or lack of thoroughness in completing data forms could lead to unusable data. Estes-Zumpf is candid: “If resource agencies are going to make management decisions that they could get sued for, based on data that’s collected by a whole suite of different people,” the data must be defensible.

She needed to know: were RMAP volunteers collecting reliable data? In 2014 and 2015, she put them to the test. She sent Game and Fish biological technicians to several sites volunteers also surveyed those seasons. Citizen scientists were slightly less successful with hard-to-detect species, such as boreal chorus frogs and bottom-dwelling salamanders. Now that she knows that, Estes-Zumpf can account for these lower detection rates when analyzing the data. Otherwise, results were comparable between the citizen scientists and professional biologists. It appears RMAP can rely upon this citizen science data, thanks in large part to thoroughly training volunteers.

Citizen scientists have expanded the scope of RMAP data collection significantly. “For the first time for some areas,” Estes-Zumpf says, “we have five years of trend data for a whole suite of species.” There have been a couple of surprises so far, such as low species diversity—almost exclusively boreal chorus frogs—in the Wind River Range and no wood frogs in the Sierra Madre. This winter, Estes-Zumpf will analyze those data to determine which, if any, montane amphibians are declining. She hopes “this monitoring program will allow us to catch problems early and deal with them quickly before more serious management or recovery efforts are needed.”

Ideally, RMAP will meet this need and then some. Since the beginning, RMAP partners have aimed to expand into other mountain ranges in Wyoming and even into adjacent states. They have also begun discussing collaborating with other agencies, such as the Bureau of Land Management. If such a partnership develops, RMAP might extend to lower-elevation habitats. Estes-Zumpf sees these partnerships as a blend of optimism and pragmatism: “There’s a lot of interest, as funding gets tighter, in having citizen scientists help us figure out what’s going on out there on the landscape.”

In this sense, we citizen scientists are also amphibious: “having two modes of existence,” or “living a double life.” Much as frogs spend part of their lives breathing through gills underwater and part of their lives breathing through lungs, we engage amphibian research at a threshold between science and recreation. And, being an RMAP volunteer transforms outdoor experiences into a blend of rigor and emotion.

Near the end of my second survey, I caught an inch-long boreal chorus frog hopping through damp grass. The frog and I stared eye to eye. It crouched on my latex-gloved palm. I could see its heart throbbing. Green and gray spots rapidly stretched and relaxed on mottled skin. As the frog’s toes clutched the curve of my thumb, RMAP’s solution to a major data collection dilemma made sense. 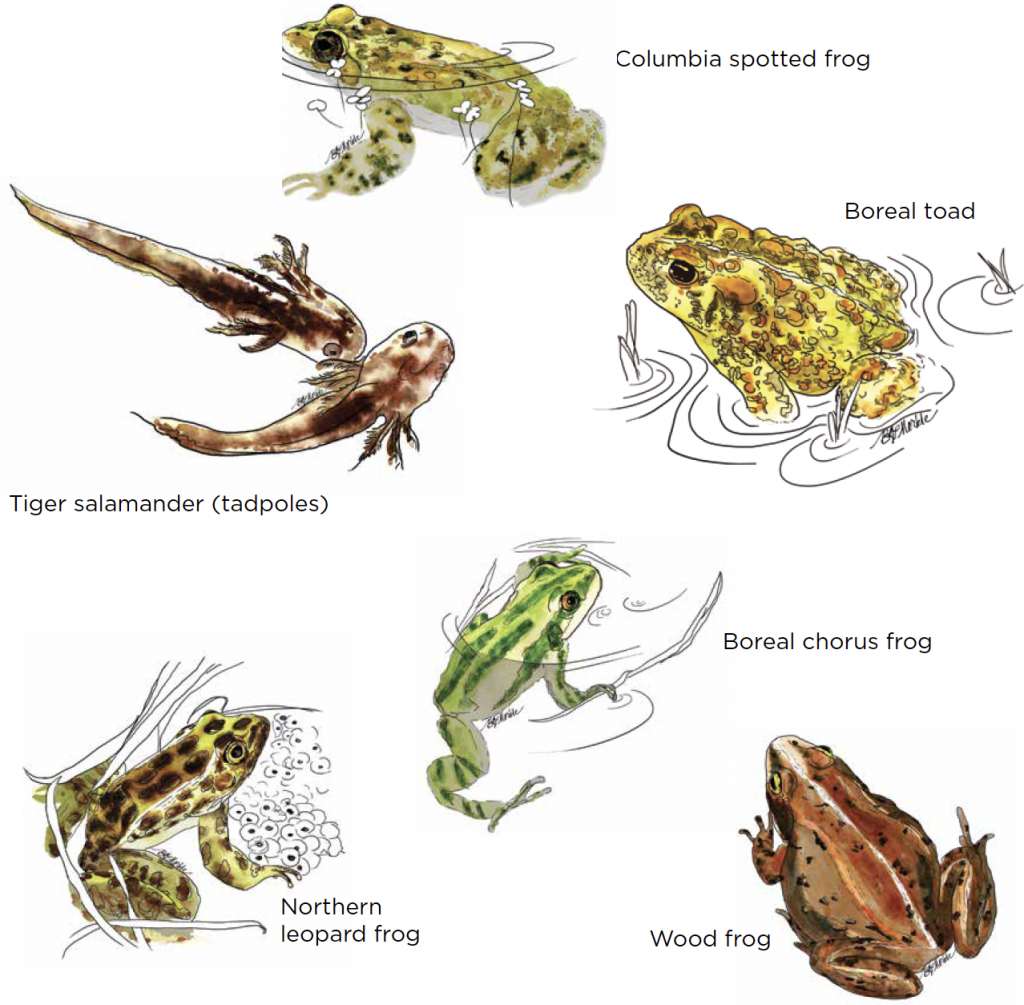 Bethann Garramon Merkle is an illustrator, science writer, and educator. Her work has been commissioned and published by entities including Parks Canada, The Nature Conservancy, American Scientist, and Montana Outdoors. Learn more about RMAP at toadtrackers.org.

Case of the Missing Otters