Before Macy Miller moved into her 232-square-foot tiny home in Boise, Idaho, she lived in 2,500 square feet in neighboring Meridian, Idaho, and typically spent “a couple hundred a month” on utilities, including gas and electricity, with some months costing even more. “It was never fun to pay a $400 electric bill,” she says.

After moving into the tiny home, her family’s typical monthly electricity bill dropped to just $8-12; the highest was $50. She shares her home with her partner, James, their two small children, Miles and Hazel, and a 140-pound Great Dane named Denver.

Miller is one of many people who are embracing tiny home living in an effort to downsize and simplify their lives. One benefit of downsizing comes in the form of reduced energy consumption. While society waits for changes in technology, infrastructure, and policy to address our carbon emission woes, the most straightforward piece of the solution may take a cue from the tiny house movement—get smaller, and emit less carbon in the process.

Fifty years ago, the average American single family home was 1,500 square feet. In 2015, newly constructed homes averaged nearly 2,500 square feet. Americans consume more and more energy to heat and cool these growing homes and power the devices inside, from laptops to microwaves. Per capita energy consumption jumped more than a quarter, from 250 million BTUs in 1960, to 316 million BTUs in 2010 according to the US Energy Information Administration. (A BTU, or British Thermal Unit, is the amount of energy needed to heat 16 ounces of water one degree Fahrenheit.)

While tiny house dwellers typically use less energy overall than those who live in traditional homes, official research on the topic is lacking. Many owners put their homes on trailers and classify them as recreational vehicles both for portability and to avoid mandatory minimum structure sizes required by building codes.

Despite the lack of hard data about energy use in tiny houses, many experts believe they represent a move in the right direction in terms of energy consumption. Kateri Callahan, president of the Alliance to Save Energy, a nonprofit coalition seeking enhanced energy efficiency, points out that tiny homes—typically only 100-450 square feet—are just a fraction of the size of the typical US home.

“That is downsizing significantly,” Callahan says. “Where you’re going to get the largest reduction is energy use because you’re not heating and cooling so much space.”

That was certainly true for Miller and her family in Boise. “In a tiny house you’re more aware of what you’re doing in every way,” says Miller. She can name every energy-consuming item in her tiny home including the propane-powered water heater, stove, heater, and a handful of electrical devices, including an air conditioner. These systems keep the family cozy on 14-degree-below-zero days—aided by ample body heat—and maintain a comfortable 72 degree temperature on scorching 114-degree days.

“Energy consumption can vary greatly from one tiny house to another,” says Vivien Luo, engineering and construction management professor at California State University, Fresno. Luo leads the Fresno State Tiny House Project, a hands-on learning experience where students build a net-zero-energy 190-square-foot tiny home. “It depends on the mechanical and electrical systems used to power the house and the appliances inside the house,” she says. 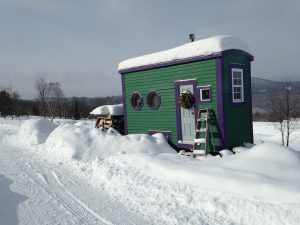 Over 2,500 miles east of Boise in Vermont, Murphy Robinson opted for a wood stove in her ultra-tiny home. She has lived in just 72 square feet for over three years. “Theoretically, I could harvest my own wood for the winter sustainably from the lot where I live,” she says. “I really like the relationship with the land.”

Her 5.5-foot by 13-foot space isn’t only her home—she also runs her business, Mountainsong Expeditions, out of it. She leads wilderness-based expeditions, courses on ethical hunting and archery, and even a women’s trail running archery course.

While she saw a huge drop in energy consumption when she transitioned to her tiny home, the downside is that the cabin freezes when she’s not stoking the fire. “I don’t have any frost-free space, and it won’t stay warm if I’m not there,” she says. She keeps items that can freeze in the cabin and stores perishables, such as olive oil, with a friend.

The cooler and ice pack she used in lieu of a refrigerator for her first two years in the tiny house, didn’t work as well as she’d hoped. “On hot days, even when I changed the ice pack every day, I was still throwing away kale after a day and a half,” she says. Now she uses a small refrigerator hooked up to a nearby solar panel, but she still finds the woodstove’s warmth affects the shelf life of her perishables. 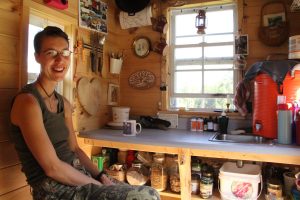 While not everyone would want to live in 72 square feet and deal with frozen olive oil and wilting kale, the tiny home principles of living lightly on the land, reducing debt, and minimizing energy consumption in an era of climate change have sparked wide interest. For example, the 2016 Tiny House Jamboree in Colorado, with three days of speakers, workshops, films, and tiny home viewings, drew 50,000 attendees.

While moving into a tiny house can reduce a person’s energy consumption and carbon footprint, living simply also reduces a different type of energy expenditure: the amount of time and effort needed to afford and maintain a massive home. Robinson finds it hard to store just about anything in her 72-square-foot structure. With only one five-foot-long bookshelf, she doesn’t acquire many material possessions. For every item she acquires, she typically has to part with something else.

“Overall, I’m pretty immune to the allure of knick-knacks because there’s nowhere to put them,” she says. This also saves energy, since less is required to produce, transport, and sell these items.

While technological fixes, such as LED lights, solar panels, and hybrid cars, can reduce carbon footprints and energy consumption, the simplest and most effective path may simply be to downsize.

Kristen Pope is a freelance writer and editor who specializes in science and conservation topics and lives in Jackson, Wyoming.