On a rainy April night when temperatures peeked just above freezing, around 30 people spread out along a well-traveled street next to a city park in Laramie, Wyoming. Decked in rain gear and a head lamp, Mel Torres, a doctoral candidate at the University of Wyoming, held a large bucket previously used to make homebrew beer in one hand, and a western tiger salamander in the other. Western tiger salamanders might be as long as your hand, or even your forearm, with moist skin ranging from yellow to olive green to black; this one stretched across her palm. She carefully lowered it into the repurposed bucket and transported it across the street. After a damp, chilly evening of running back and forth, the volunteers helped nearly 40 salamanders to safely make the crossing. Without such a “bucket brigade,” vehicles might have squished many of these amphibians while they migrated from winter burrows to breeding ponds in the nearby city park. 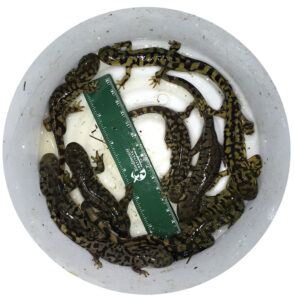 A batch of salamanders await their ride to the breeding pond in a plastic bucket, fortunate to avoid the fate that meets many salamanders on the street (below). (Photo by Cody Porter, iNaturalist)

Roads often chop up habitat that amphibians such as the western tiger salamander need to live out complex life cycles. As migrating amphibians crawl, slither, or hop across roads, drivers can crush amphibians under their tires without realizing it. In a worst-case scenario, vehicle collisions wipe out amphibians in a particular area. When concerned amphibian enthusiasts shuttle salamanders across roads all night long, it certainly benefits each animal that survives the dangerous crossing. In terms of the overall population, volunteer bucket brigades also may have a small, but still worthwhile, impact on amphibian conservation.

For western tiger salamanders and many other amphibians around the world, migrating is critical to their life cycles. Each spring, salamanders move from underground burrows that shield them from winter’s chill to nearby ponds, where they breed and lay their eggs in the water. Over the summer, larvae—young salamanders that have gills—live in the vegetation along the pond’s edge. As grasses change from green to brown later in the summer, some salamanders will stay in the pond, while others metamorphose into adults and venture onto land, eventually migrating back to the safety of their winter burrows.

Climate change, the widespread chytrid fungus, and a suite of other factors are causing rapid declines to amphibians around the world; road mortalities just add to this bleak picture. When scientists compared how roads affect different types of species, they found that amphibians are particularly vulnerable. Depending on the species and the ecosystem, roads can fragment habitat, reduce species diversity, and even change behaviors such as the rate and type of breeding calls. On top of that, vehicles can kill a staggering 40–100 percent of migrating salamanders in some places. Bucket brigades, like Mel and the rest of the Laramie team, try to mitigate this direct threat to amphibian populations. 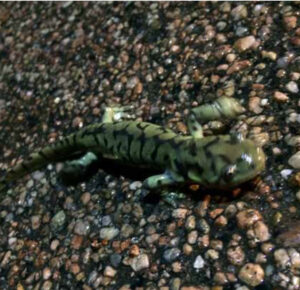 Mel chuckles, noting that salamanders do not appreciate being picked up, but her technique of a “gentle but firm hand” allows her and the other volunteers to help salamanders make it safely to the pond. When the first rainy night in spring cues salamanders to start migrating, many adults move to the breeding pond at once. The predictable, mass migration makes it easy for volunteers to know when to grab their buckets and headlamps and where to focus their help. In the fall, however, salamanders return to their winter homes in a less concentrated and predictable way, which makes it much harder for volunteers to help them back across the roads. Volunteer efforts can be most beneficial if they help salamanders get both to their breeding ponds as well as back to their winter burrows after breeding; the return to their winter burrows is the tricky part.

Researchers and conservationists have explored other solutions that might appear better than these volunteer efforts for protecting migrating amphibians. For example, drift fences direct migrating amphibians toward culverts under roads, allowing them to cross unscathed. But even in a small area, amphibians need multiple opportunities to cross. The sites where amphibians migrate are all different, requiring site-specific research to inform crossing structure installation, and these expenses add up quickly. Without one obvious solution, reducing the damage that roads cause to amphibians might rely on using multiple techniques at once, including volunteer events, permanent migration crossing structures, and other efforts. 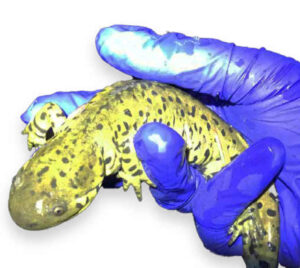 Volunteer holds up another western tiger salamander with a gloved hand before lowering it in the bucket. Photo in Laramie, Wyoming. (Photo by Mason Lee, iNaturalist)

Meanwhile, there is some evidence that efforts like those in Laramie can help both individual salamanders and their populations. Researchers in one study simulated how much different types of volunteer efforts benefitted salamanders. In over 300 potential scenarios, almost every situation with volunteers helped salamander populations. In other words, nearly any volunteer effort is beneficial for the survival of a single salamander, as well as for conserving salamanders in an area. And volunteer efforts can provide valuable information, such as helping researchers identify what conditions prompt migration, observing when a species is declining, and informing where to target efforts such as crossing structures.

Amphibians live in a world increasingly crisscrossed by roads, and these roads are formidable obstacles on the paths between their winter burrows and summer breeding ponds. Volunteer efforts alone won’t save salamanders, but they are one tool in the conservation toolkit. Reflecting on her time spent shuttling migrating western tiger salamanders across busy Laramie roads, Mel notes, “Anything is better than nothing to just help increase their survival.”

Rhiannon Jakopak is a research scientist with the Haub School of Environment and Natural Resources at the University of Wyoming.

Sterrett et al. 2019. The contribution of road-based citizen science to the conservation of pond-breeding amphibians. Journal of Applied Ecology 56:988-995.

Correction: The print version of the magazine incorrectly credited the photo of the salamanders inside the bucket. The photograph should be credited to Cody Porter, iNaturalist.