A mile outside of Browning, Montana, a watercraft inspector sits on the side of the highway next to her kennel. She’s waiting for boaters heading to and from Glacier National Park to pull onto the side of the road for a mandatory invasive species check. Meet Lily, a 55-pound, 11-year-old, golden Labrador retriever with a white face. She wears red booties on her front feet and a red vest. Today, Lily and Aimee Hurt, her trainer, are here to support two Blackfeet Fish and Wildlife rangers, Lia Rattler and Leander Butterfly. Together the team is searching for signs of zebra and quagga mussels, two invasive species threatening Montana’s beloved rivers, lakes, and streams. Lily is not only speeding up the searches, but she’s also helping spread the word about how critical these inspections are in protecting the West’s waters from invasive species. 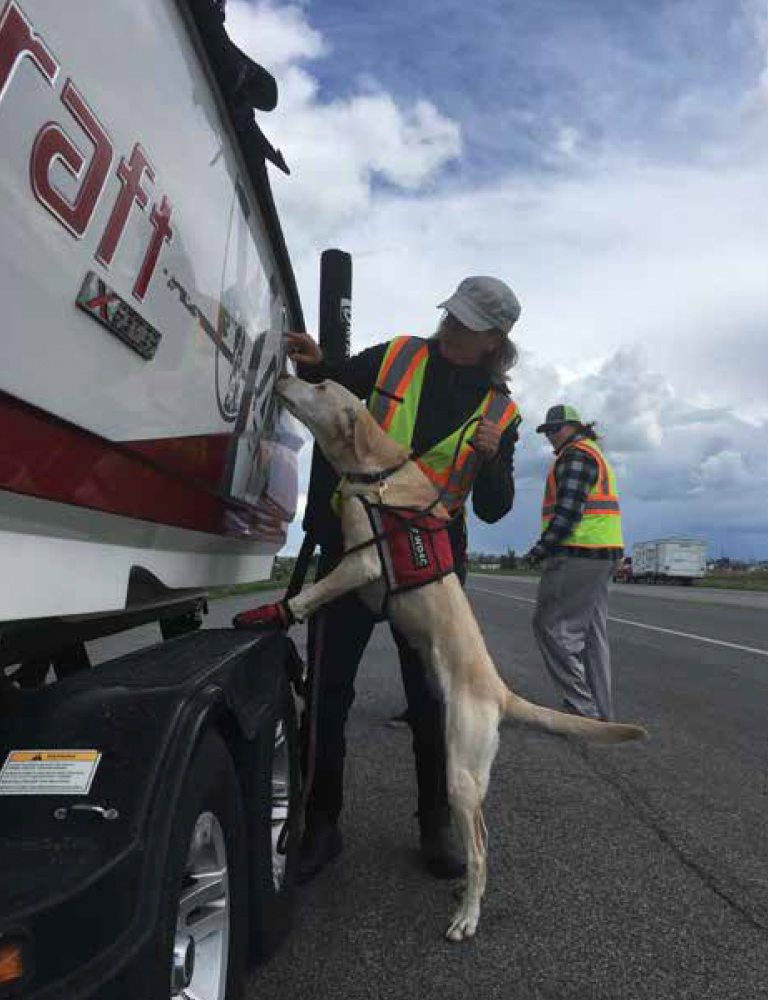 Lily and her trainer, Aimee Hurt, check a boat for signs of mussels outside Browning, Montana. (Photo by Maria Anderson.)

These mussels are prolific, pistachio-sized creatures which affix themselves to surfaces with a byssus, a clump of secreted filaments. In Michigan, the mussels have already caused huge, ecosystem-wide shifts in Lakes Michigan and Huron, two of the world’s biggest lakes, where trillions thrive. Mussels, which have been moving west over the last few decades, pose a massive threat to Montana’s aquatic ecosystems and struggling native fish populations like Arctic grayling, bull trout, and westslope cutthroat. The mussels consume all of the microscopic food in a water system, leaving little for other wildlife, including native fish. They also encrust infrastructure, like water pipes, and ruin beaches. Imagine cutting your feet on decaying mussel shells any time you tried to walk barefoot along your favorite lake.

Mussels spread quickly in part because they produce up to one million eggs per year. Fertilized eggs develop into microscopic larvae, called veligers, within a few days. These near-invisible larvae can survive for weeks in river currents and travel hundreds of miles. They love lakes and sluggish rivers, and they can live undetected inside motors or tanks, where human inspectors can’t reach. This is where the dogs come in. Unlike humans, they’re extremely effective at detecting mussels in the larval stage. While humans must use sight and touch to search boats, feeling for a sandpaper-like texture of juvenile mussels just beginning to grow their hard shells, dogs are able to smell the veligers in water, where they’re completely invisible to humans.

“For dogs like Lily,” says Hurt, “this is the most fun thing they could do.”

At this point, Montana is not infested. Water sample tests do show, however, that the mussels are making their way west, though officials have not found any established populations or adult mussels. In 2016, Montana Fish, Wildlife, and Parks found low-density traces of larvae in water samples from the Tiber Reservoir, near Shelby. Subsequent water samples in Canyon Ferry Reservoir, the Milk River below the Nelson Reservoir, and the Missouri River near Townsend showed inconclusive but suspect results. In mid-June of this past year, North Dakota had its first mussel contamination, after an angler spotted them in Lake Ashtabula. Wyoming, Washington, Oregon, New Mexico, and Idaho are the only states in the West which have no known mussel detections—and which conduct sufficient monitoring to determine with any degree of certainty that they likely don’t have mussels.

Lily and Hurt are here through Working Dogs for Conservation (WD4C) in an attempt to keep the mussels out of Montana for as long as possible. Hurt, who holds a biology degree from the University of Montana, cofounded the Bozeman-based company, which trains high-energy, tough-to-home shelter dogs to protect ecosystems and wildlife around the world. WD4C has 12 mussel-sniffing dogs on staff, and 35 dogs total who work in 16 countries across five continents. They’ve partnered with dozens of conservation groups, helping protect ecosystems from invasive species by catching invaders early—brook trout, emerald-ash borer, yellow star thistle, rosy wolf snails, and brown tree snakes, to name a few. The dogs are especially good at identifying the first colonizers of an invasive species, so that managers have a chance to intervene before a population establishes.

“I see dogs as a way for us to buy more time before mussels hit Montana,” Hurt says, “while researchers come up with more tools to deal with the invasion.”

WD4C looks for what Hurt calls “needle-in-a-haystack dogs” by tossing a ball down the aisle of a shelter and looking for the dog that tracks it. They go through about a thousand dogs to find one who is suitable for this type of work. A good working dog like Lily is too much for a typical household. “I’ve learned that if there’s some point during the dog’s initial stay where I think, ‘This is a huge mistake,’ then I know the dog is a good fit,” says Hurt, who found Lily through a private shelter near Atlanta. Lily was on her fifth home before she came to live with Hurt and three other dogs in Missoula.

Hurt describes their first training exercise together as a disaster. “I was tangled up and she was barking and frothing and confused.” But Lily soon improved. In another exercise, Hurt would place a scent inside cinder blocks, and when Lily sniffed the target scent, Hurt would throw a ball across her line of vision. Quickly, Lily realized that all she had to do to earn playtime was to approach a target scent and sit. Many veteran dogs like Lily learn scents in a few hours. (Wicket, a retired dog in Hurt’s household, knows 32 scents—from Hawaiian rosy wolf snails to Chinese moon bear scat—and has traveled more than 100,000 miles in 12 years of field work.)

Lily knows 19 scents so far, including white-footed vole, grizzly scat, and Lespedeza, a flowering plant also known as bush clover. She can even tell the difference between an invasive species of Lespedeza and a native species. This summer, she worked in Ravalli (a small town near Flathead Lake), both ends of the Bighorn Canyon, Yellowstone Lake, and Lake Roosevelt.

As of late July, Montana Fish, Wildlife, and Parks inspectors had checked over 50,000 watercraft, and found 12 boats containing traces of mussels this year. This morning, outside Browning, a truck pulling a large motorboat stops and two men climb out.

“Mind if Lily here checks your boat?” asks Hurt. She wears muck boots and a fluorescent yellow vest with dog toys in the pockets that Lily keeps trying to grab.

“Oh, you got dogs doing this?” the man with the ponytail says. “That’s really neat.” 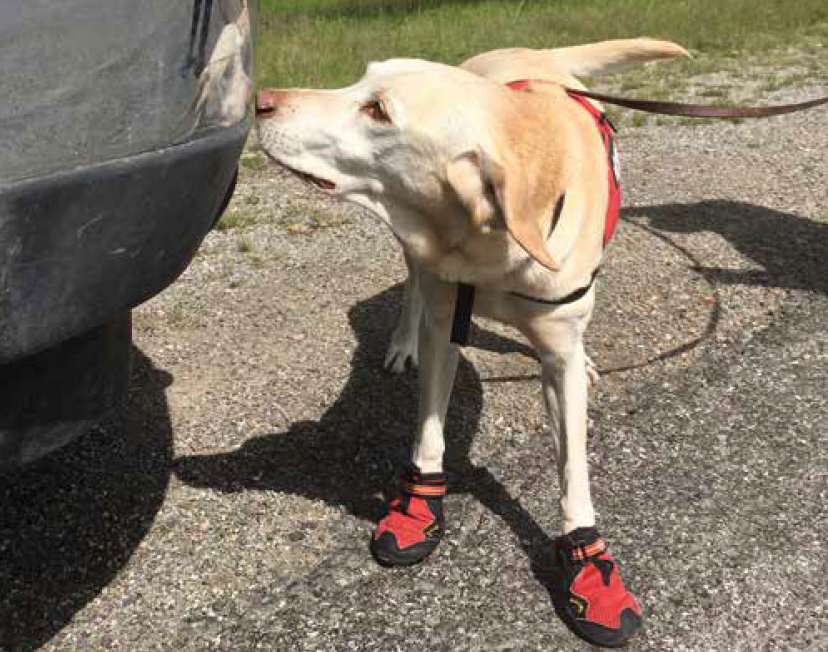 Lily carefully checks each vehicle and watercraft, sniffing for both adult mussels and their microscopic larvae called veligers. (Photo by Maria Anderson.)

“Show me,” says Hurt. Lily shuffles, squeaking, tail wagging. She trots back and forth, going where Hurt points.

Lily puts her nose on the bumper, leaving a wet mark in the dust. She walks all the way around the boat. Hurt takes extra care to direct Lily toward the drainage holes in the back, where Lily jumps and places her booties on the boat to balance while she sniffs. Nothing. The rubber ball on a rope stays in Hurt’s pocket.

The inspection is over in less than five minutes. Hurt hands the men a card with Lily’s picture on it and information about WD4C and mussels. Public education is an important part of Lily and Hurt’s job. WD4C trained Alberta Environment and Parks’ Conservation K9 teams in mussel prevention, and they did more than $1 million worth of outreach in the program’s first year.

The men climb back into their truck, pull onto the highway, and drive away. After a few chilly hours, the sun comes out. Vehicles stop every 15 to 20 minutes. Lily sniffs kayaks, motorboats, and blow-up paddleboards. No sign of mussels today, but Lily doesn’t mind. Every so often, Hurt hides a vial of frozen mussels somewhere on her truck so that Lily can find them and earn some well-deserved play time.

Mussels haven’t infested Montana yet, and dog-handler teams like Lily and Hurt could be critical in keeping these high-stakes invaders away for as long as possible.

Text and photos by Maria Anderson

Maria Anderson’s work has recently appeared in Alpinist, Climbing, 32 Degrees, and Best American Short Stories 2018. She earned her MFA from the University of Wyoming and currently lives in Bozeman, Montana. Find her on Twitter @mariauanderson.