Rolling over a dirt road hemmed in sagebrush, Patti Baldes steered her ATV down to the bison herd that she and her husband, Jason Baldes, restored to the Wind River Indian Reservation after a 130-year absence. I sat shotgun, peering out at the lone bulls we passed as we descended, the distant Owl Creek mountains framing their massive forms against the horizon. Patti, who’s Northern Arapaho, chatted with a calm and vibrant energy, describing the behaviors she and Jason, who is Eastern Shoshone and the tribe’s herd manager, had observed over five years of stewarding the bison herd, as well as the challenges they faced along the way.

As we reached the bottom of the track, I was keenly aware of how rare wild bison are. The group of twenty cows and calves meandering just across the meadow from us represented a mere remnant of the millions that ranged the continent before the arrival of European settlers.

“That’s Buffalo Goodbeard,” said Patti, pointing to a stately bull browsing near the head of the group. While it’s an affectionate name, Pattie and Jason don’t intend for Buffalo Goodbeard and his companions to live as pets or livestock. With this herd as the beginning, Jason and Patti envision the restoration of a “wildlife economy,” in which wild bison become an act of reconciliation between the United States and the tribes, a central part of Native food sovereignty, and a step towards ecological recovery for Wind River. “We are decolonizing our land here,” says Jason. 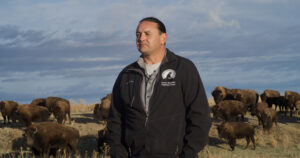 In 2007, Jason brought the first ten bison designated for conservation to Wind River. Today there are more than one hundred buffalo on the reservation. Photo: Tom Christiansen, courtesy of Jason Baldes.

For Jason and Patti, bison bridge the past and future on the reservation. They were once the cultural and ecological heart of Indigenous culture on the Plains, with tribes depending on them for hides, meat, tools, and trade, and honoring them through ceremonial traditions. The herds’ intense grazing and wallowing were a force of nature, shaping the Plains by creating a mosaic of habitat types that enhanced the region’s biodiversity, from insects to songbirds.

But by the end of the 19th century, the westward expansion of white settlers and their subsequent overhunting of bison nearly drove this keystone species to extinction.

Bison were so numerous and embedded in every aspect of life on the Plains that researchers argue their rapid decline led to one of the largest economic collapses in North American history. The effects of this collapse are measurable today. In 2000, per capita income on the reservations of formerly bison-reliant nations was 30% lower than those whose societies were not tied to bison.

Jason says that the Northern Arapaho and Eastern Shoshone, the tribes who share Wind River, have suffered in the absence of a cultural and economic relationship with bison. In turn, the land has suffered from an impaired ecological integrity. For instance, where bison once roamed, promoting biodiversity, feral horses now degrade habitat for other species. “In 130 years we’ve forgotten how to see, taste and smell buffalo, but we’ve had relationships with them for thousands of years,” Jason says.

Buffalo are the cultural and ecological heart of the Plains. Photo: Janey Fugate.

Wildness and relationship go hand-in-hand in the wildlife economy Jason is working toward. According to Jason, rebuilding a wildlife economy is a step towards cultural recovery for nations like the Shoshone and Arapaho. It may not look like a full return to relying on bison as a primary source of wealth, but it does represent a step away from policies imposed on the reservation that pushed agriculture onto cultures predominantly defined by hunting. Bison as wildlife are tied to Native food sovereignty and landscape restoration.

Yet even the word “wildlife” has a colonial taint. Before the U.S. government established the reservation system, there was no concept of wildness separate from human civilization. “There is no word for wild in our language, what’s wild is what happens in cities where the people are,” Jason says.

It was far from the U.S. and its systems where Jason found the inspiration to restore his tribe’s relationship with bison: on a trip 9,000 miles away in East Africa. There, he witnessed the wildebeest migration with his father. “I drove hundreds of miles alongside them. There were 1.5 million wildebeest, which is less than 5 percent of the bison here two hundred years ago,” Jason said. “It changed everything.”

Emboldened by the scale possible for wildlife populations in other parts of the world, Jason returned home to initiate a partnership between Wind River’s two tribes and the National Wildlife Federation, as well as leverage a longstanding relationship between the reservation and the U.S. Fish and Wildlife Service. In 2016, Jason brought the first ten bison designated for conservation to Wind River. Over the next seven years, his collaborations—and his herd—grew. Today, the Shoshone bison herd has grown to seventy-five individuals and the Northern Arapaho herd has fifty-six. 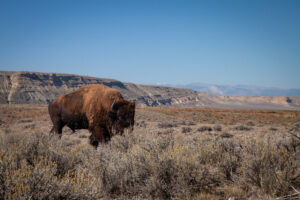 Working with wildlife, especially relocating them, is difficult from both a regulatory and a financial standpoint. Knowing this, I was struck by both Jason and Patti’s grit. They have bridged tribes with longstanding cultural differences, worked successfully with large, bureaucratic agencies, weathered racism inherent in systems that aren’t set up to help Indigenous people flourish, and strategically paced the changes they are bringing to Wind River.

The biggest challenge, Jason says, is changing the way people see bison, which is nothing less than a “paradigm shift.” He is working to have them treated as wildlife, not livestock. This distinction is both symbolic and technical, with legal ramifications for land management.

In most western states, bison are legally designated as livestock outside of national parks, which implies they aren’t allowed to range freely like elk or deer. Most bison in the U.S. (around 200,000) are raised for beef on commercial ranches and often share genes with domestic cattle. Even outside of ranches, seeing bison as little more than woolly cattle is pervasive.

However, there are a few exceptions where bison are legally considered wildlife in Wyoming. Bison roam freely in lands adjacent to Grand Teton National Park and in the Absaroka bison management area that encompasses lands west of Cody. Free-ranging bison outside of these areas is illegal, according to the Wyoming Game and Fish Commission, but Jason is working to make Wind River an exception.

Currently, Wind River’s tribal game code does not include bison, meaning they aren’t considered wildlife. For this to change, the General Councils of both tribes would have to amend the code, by vote, to include bison. Amending the tribal game code could open more land for bison to roam on the reservation and bring opportunity to retire grazing permits on specific range units currently used for cattle. Patti and Jason both say that prioritizing land for bison habitat is a critical part of land rematriation. The concept of rematriation emphasizes that bison restoration is an act of reconciliation promoting tribal sovereignty, and refers to the matrilineal family structure traditional for Wind River’s tribes.

Resistance to increasing bison’s presence on the reservation largely comes from the agricultural industry, which fears the number of unknowns associated with their potential expansion. There is also the financial cost of retiring grazing leases. And there are bureaucratic hurdles to changing processes instituted by the Bureau of Indian Affairs. “It takes time and persistence, it’s political. But we want to build momentum for a favorable resolution and we do that by educating our people on their historic relationship with buffalo and the importance of it in our lives again,” says Jason. 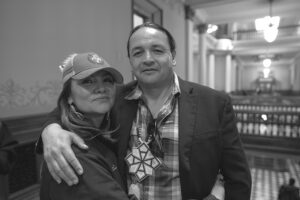 Fighting for these changes is part of Jason’s long-term plan, which includes running the newly established Wind River Tribal Buffalo Initiative to manage the herd and coordinate outreach around the project. He hopes to create an academic arm of the institute to guide scientific research—led by Indigenous people—that will monitor the animals’ ecological impact on the landscape.

Given the Baldes’ accomplishments thus far, these plans seem immanently achievable. But their vision for what bison can mean on Wind River extends far beyond their lifetimes. They are working so that generations of buffalo and humans will once again live in relationship with one another on Wind River. “The thing that drives it the most is being able to go out and hunt a buffalo with my grandkids and my dad,” Jason says. A generational focus is a departure from today’s economic model that prioritizes instantaneous gratification, but men and women like the Baldes’ are paving the way for a broader paradigm shift.

Janey Fugate is a storyteller and a master’s student with the Zoology and Physiology Department at the University of Wyoming under Dr. Matthew Kauffman. Her research focuses on how Yellowstone bison, after being reintroduced to the park, established the migration patterns they exhibit today.