Crowell Herrick, 63, rides his gravel bike down Montana Highway 1, wearing a high-vis vest. He’s fresh off a night under the stars, sleeping bag and bivy sack strapped to his bike. Cruising along the road, he scans from the center line, to the lane, to the shoulder, to the right-of-way. Spotting a bloodstain up ahead, he brakes hard and dismounts, approaching the smear. Just as speculation sets in, he spots a porcupine, dead on the shoulder across the road. The kill is fresh; it wasn’t there the night before. Photographing both the bloodstain and the carcass, he types some quick notes into his phone and hops back on his bike, knowing he’ll stop many more times before he makes it home. 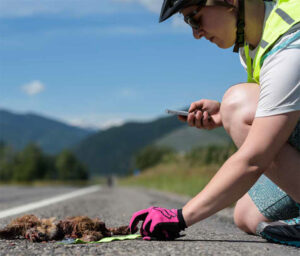 A citizen scientist records the size and location of roadkill on Highway 191 near Big Sky. (Photo: Kyle Moon, Adventure Scientists)

Herrick is a volunteer for the nonprofit organization Adventure Scientists, cycling for their Wildlife Connectivity project. The project, in partnership with Montana Department of Transportation and Montana Fish, Wildlife and Parks, aims to use citizen science to expand documentation of roadkill and by doing so, to better understand wildlife-vehicle collisions in the state. Ultimately, the data is meant to improve safety for both wildlife and people on Montana’s roadways and beyond.

“Roadways are one of the main arteries through which humans and wildlife interact,” says Marcus Pearson, director of program investments at Adventure Scientists. Unfortunately, the interaction is often negative, with wildlife-vehicle collisions killing more than 365 million animals, injuring 29,000 people, and causing $8.4 billion in damages each year in the United States. In Montana, where the wildlife is big—and in the case of grizzly bears and lynx, threatened—the impacts of wildlife-vehicle collisions can be particularly costly, dangerous, and visible. The Department of Transportation and Fish, Wildlife and Parks, each according to their mandate, are responsible for mitigating this harm as much as possible.

“The human world can have an outsized impact on how safe wildlife are on the roadway,” Pearson says, so Fish, Wildlife and Parks needs to understand how animals’ movements intersect with human roadways in order to protect the state’s wildlife. At the same time, preventing animal-vehicle collisions is essential to the transportation department achieving “Vision Zero,” which calls for zero fatalities and zero serious injuries for drivers on Montana highways.

To inform these goals, both organizations get regular reports directly from crashes, citizens gathering roadkill, carcass collections done by department employees, and surveys and radio collaring conducted by professional biologists. The data inform future management strategies. For example, “if we have a bridge that needs to be replaced,” says Tom Martin, environmental services bureau chief at Montana Department of Transportation, “we look for accumulations of data…that point to some problem.” Perhaps someone died in a crash, or department employees frequently collect carcasses from that spot. “Then we’re going to design a feature, as economically as possible, to mitigate that problem.” Moreover, because there are more needs than can be funded, Martin says the data help prioritize the projects and “get the biggest bang for the buck.”

And yet, the information that both state agencies use is incomplete, because each data stream has certain limitations and biases. Some vary seasonally, others are opportunistic, and most are done from a moving vehicle. All represent an investment of precious resources, including personnel time and departmental funds. The limits of the data then limit the action that can be taken to prevent wildlife-vehicle collisions. Enter, Adventure Scientists.

“It may seem unusual that road cyclists would be recruited to gather information about motor vehicle accidents with wildlife,” begins Jenn Shoemaker, associate director of communications at Adventure Scientists. But cyclists had something to offer that no one else did.

Volunteer cyclists are “better placed to see more wildlife than anyone who is trying to do this work from a car,” says Shoemaker. Moving slowly, the cyclists notice the smallest signs and most faded evidence of roadkill, down to the blood smear Herrick noted on Montana Highway 1. Bikers also see into ditches and roadside vegetation that might otherwise obscure wildlife. 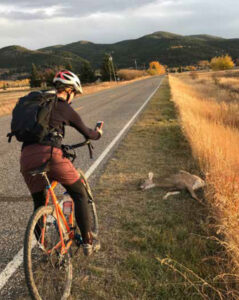 As such, volunteers report on a wider variety of species than existing data streams. “You expect it to be deer, deer, deer, all the way down the road,” says Shoemaker, “and it’s really not. When you’re going slower you see a lot of smaller things.” Indeed, Herrick said he got involved with Adventure Scientists because, as an avid cyclist, “one of the things [he] noticed right away was all the little birds that you don’t see when you’re driving down the road at 60 miles per hour.” Prompted by these observations he asked, “I wonder if anyone knows about this?” In addition to the deer, elk, and antelope that dominate agency reports, volunteer cyclists have observed birds, snakes, skunks, foxes, racoons, voles, and even spiders.

Herrick says that, even with up to 40 stops on a ride, he can complete 50 miles of road in about four and a half hours; he overnights because he enjoys sleeping out under the stars and exploring a new part of Montana. Eric Noyes, another Bozeman-based volunteer, completes his segment in just an afternoon. He says he uses the time to contemplate the fraught and fractured relationship between people and nature. As a senior advisor for The Nature Conservancy’s Indigenous Peoples and Local Communities program, he says he’s “trying desperately to stop the collapse of the natural world.” Cycling for Adventure Scientists “[is] a way to do something more tangible, collecting data on the ground in a certain place that contributes to an overall effort.”

The Adventure Scientists’ protocol accommodates these varying kinds of volunteers and styles of data collection, allowing cyclists to select the road they ride from a menu of options and making sure that volunteers can record an observation in just a few minutes. As well, volunteers receive training and safety gear and don’t have to be able to identify roadkill species in order to participate.

And yet, these concessions to volunteer experience don’t come at the cost of data quality. “There are a number of supporting research papers suggesting that data collected by community science are equal to data collected by experts,” says Dr. Jenélle Dowling, scientific director at Adventure Scientists. That is, it can be just as good if the project is designed well.

Dowling says this is the benefit of focusing on data collection, while leaving analysis and implementation to partners. “We are specifically devoted to designing studies really well and carefully, and also managing the volunteers so they have a really good experience,” she says. “That’s pretty unique.” Pearson adds that it is all in service to quality, usable science. “Our end goal is to work with our partners to identify what their need is,” he says, “and to identify the direct line next steps from the data collection itself to some form of change, be it management decisions or innovations in science.”

As such, every observation that volunteers contribute is a result of collaboration between Adventure Scientists and their partners. For example, volunteer cyclists record not only the roadkill with its location, time, and date, but at the request of Montana transportation, also the road conditions, the weather, notable topographic features, and any existing infrastructure. They also record any live animals they pass. “One way that those types of observation can be helpful,” says Martin, “is if [the volunteers] were to see a group of antelope congregated at a fence…it could indicate that the fence is acting as a successful barrier.”

Volunteers also collect control data, recording all the same observations as their other reports, but at designated intervals rather than at carcass locations. This way, partners can compare the conditions at vehicle-wildlife collision sites to conditions elsewhere on the roads. This could help reveal contextual patterns at collision “hotspots.” Roadkill may be concentrated, for example, where waterways get close to the road.

Dowling and her team also consulted quantitative biologists and the existing literature to decide how fast, long, and often their volunteers should ride. Volunteers have to ride during a ten-day reporting window each season and commit ahead of time to riding a section of road from a pre-approved list. Without these parameters, data would tend to clump around convenient or popular areas (spatial bias) during weekends and periods of nice weather (temporal bias). With the parameters, however, the project avoids these two most common pitfalls of citizen science.

As of February 2021, more than 100 volunteers had ridden a total of 6,712 miles of key Montana roads and made 3,368 observations. While the project is too young to draw solid conclusions from, Martin is hopeful that the information produced will help the transportation department improve road safety for people and animals. “It’s a new take on wildlife-vehicle collisions, a different way to think about it, a different way to collect data and make it real,” says Martin, “Who can’t get excited about that?”

It’s not just about the data, though. Martin lauded the program for “starting a conversation, raising awareness, and building some personal accountability.” We can all be part of Vision Zero, he said, if we “slow down, remain attentive and keep our eyes on the road.” That’s just what the project did for Shoemaker when she surveyed a section of road herself. “It was really enlightening for me to slow down, look around, and catch my breath,” she said. “I realized there is all this bustle that I normally fly by in a car. It’s given me an appreciation of all the other animals besides me and the impact we have on them.” 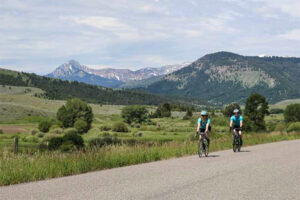 Herrick, for his part, plans to continue volunteering for Adventure Scientists, saying that he likes exploring new parts of Montana, is happy be helping out, and enjoys the novelty and detective work involved in the observations. “I saw a turtle near a wetland, and I thought it was probably trying to cross,” he says. “It was sad, but neat…a highlight. There’s not that many turtles in Montana.”

Noyes echoed the sadness that such a project can entail. He said, “My ride was pretty heartbreaking, just to see in 25 miles each way, lots of birds, lots of snakes, lots of different amphibians, elk, and deer. One teeny strip of pavement in Montana full of death.” But, he continued, “We can never lose hope. We have to latch on to these little things that each of us can do, collectively, and to stay spiritually strong because there are hard times coming for sure.”

Birch Malotky is a freelance journalist and MFA candidate at the University of Wyoming. She writes at the intersection of science, conservation, and recreation, with a special eye to when they support each other and when they conflict. Follow her @birch_breeze.