How to restore sagebrush habitat on decommissioned roads

In the natural gas fields of western Wyoming, innumerable dirt roads cut through the sagebrush steppe, connecting gas wells and carrying heavy equipment. Sublette County hosts both the Jonah Field and the Pinedale Anticline, two of the most productive gas fields in the continental United States. Mule deer and pronghorn skirt the dusty web of roads, shying away from the noise and activity. Male sage grouse strut and show, struggling to attract hens amidst the cacophony of heavy truck traffic and thumping well pumps. Many studies have shown the negative impacts of active roads on local and migrating wildlife, but what happens when the traffic stops? Is it possible to restore native sagebrush habitat when a road is decommissioned?

“Sagebrush community restoration in itself is not an easy undertaking,” says Pete Stahl, “and then it’s complicated when you have all the compaction of soil that’s caused by roads.” Stahl is a soil scientist and the director of the Wyoming Reclamation and Restoration Center at the University of Wyoming where he also teaches restoration ecology. Stahl says restoring sagebrush habitat on decommissioned roads “can definitely be accomplished consistently, if the proper planning and practices are used and time is allowed.” There are also preventative measures that can help drive successful road restoration in sagebrush.

Roads are the most extensive and enduring human disturbances across Western landscapes. Colonization of North America established roads that may never be erased. Ruts from wagons carrying nineteenth century travelers on the Oregon Trail are still visible from Wyoming to Oregon. Vast networks of highways and dirt roads now cut across the landscape, and escaping the noise of traffic anywhere in sagebrush is increasingly difficult. Unlike most transportation infrastructure on our landscapes, roads built in gas fields are meant to be decommissioned after the well goes dry. Sometimes that’s within a few years of construction, but more often after 20 or more years of use.

Restoring native sagebrush communities on decommissioned roads increases available food, habitat, and resources for wildlife while reducing erosion and restricting the potential for invasive plants like cheatgrass to spread. In an environment of extremes—with high winds, little precipitation, hot summers, and very cold winters—the sagebrush steppe hosts diverse plants and animals. Some animals, including pronghorn, pygmy rabbits, sage grouse, and sagebrush lizards, rely entirely on sagebrush for at least part of their lives. In addition to animals, sagebrush also fosters native grasses and wildflowers, both by providing shelter above ground and supplying water and nutrients below ground. It has a deep tap root that reaches as far as 13 feet below the surface. With this taproot sagebrush can transport water to dry portions of the soil profile through a process known as hydraulic lift. Additionally, sagebrush can create islands of fertility by trapping organic materials near the soil surface, thus retaining water and supplying wildflowers and grasses with nutrients. In return, the grasses and wildflowers shade the surrounding soil, reduce erosion and evaporation, attract pollinators, trap snow, and help build healthy surface soil. 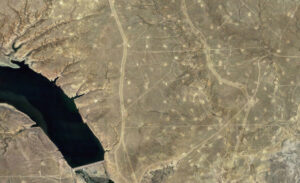 Soil is foundational to successful restoration. Restoration ecology is the science of assisting the reassembly of native communities of plants and animals. It is a young science, and sagebrush community restoration is not well understood. Sagebrush itself is notoriously difficult to cultivate. Further, many native plants in sagebrush are perennials which grow from well-established roots year after year. The roots allow these plants to survive years of drought, wildfire, and other disturbances, but too much disturbance—such as heavy traffic—can kill the plant. Re-establishment can be very difficult because seedlings struggle to germinate and survive in the harsh climate. Additionally, few seed sources exist for many native sagebrush steppe plants. For some plants, no known cultivated or collected seeds exist, and collection requires precise timing. Even if restoration ecologists can find seeds to plant, it may take years of expensive and time-consuming reseeding until the right set of conditions allows these perennial plants to reestablish. Planners generally allot a two- to five-year window for assessing the success of a restoration project, but it can take longer to reestablish diverse sagebrush communities.

Planning is critical to restoration. Stahl says, “With a little forethought you can avoid a lot of problems.” Factors to consider in planning road construction include salvaging appropriate layers of topsoil. Stahl advocates for including a soil scientist on the construction team, indicating equipment operators can become adept at saving important soil layers when they collaborate with a soil scientist. Planners should avoid steep slopes wherever possible to reduce erosion during use and facilitate seeding during restoration. Stahl also advises against disturbing sensitive habitats where there may not be a seed source for some of the native plants. 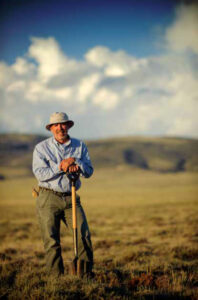 Soil scientist Pete Stahl directs the Wyoming Reclamation and Restoration Center at the University of Wyoming where he also teaches restoration ecology. (Photo by UW)

Once a road is decommissioned, deep ripping or tilling that reaches under the compacted soil is critical to allow roots and water to penetrate. That ripping can also make a decommissioned road impassable, thus preventing recreational traffic. Land movers can then replace the salvaged topsoil in a way that replicates the pre-disturbance topography that was shaped by regional climate. Seed mixes should be sourced from nearby seed companies so the plants are adapted to local conditions, and the mix should reflect the pre-disturbance plant diversity in representative proportions. Many considerations in road restoration are specific to the location, and the weather is always a gamble. Restoration should plan for the possibility that seeding may fail due to unpredictable weather and that it may take repeated applications before plants establish.

When asked if he sees any common misconceptions around roads, Stahl says people’s perceptions of roads may be part of the problem. “A road in itself may not be that harmful or have that many impacts on wildlife habitat. It’s the traffic on the road that may be more important than the road itself.” But traffic does not necessarily stop when gas production ceases. In the sagebrush steppe, anything resembling a two-track is considered fair game for motor vehicles like ATVs. That traffic disturbs wildlife, prevents seedling establishment, and hampers restoration.

Thanks to the Surface Mine Control and Reclamation Act of 1977, which mandates extensive pre-disturbance ecological surveys and bonded restoration plans, coal mines have pioneered restoration ecology in the sagebrush steppe. Oil and gas extraction is not regulated under such comprehensive restoration legislation. However, with Environmental Impact Assessments increasingly mandating restoration plans and some companies voluntarily undertaking restoration to maintain a good relationship with the surrounding communities, oil and gas sites might be able to replicate coal mine restoration efforts.

The Dave Johnston coal mine, just east of Casper, Wyoming, provides one example of successful road restoration. After the mine was retired, soils were replaced, topography rebuilt, and sagebrush was seeded on late winter snow to replicate natural conditions. In his early visits to the mine, Stahl travelled along retired mine haul roads with substantial soil erosion and compaction issues. He returned years later to find little or no evidence of the reclaimed roads. This site presents one of the only successful large-scale sagebrush restoration projects in the West and offers tested methods that can improve restoration efforts elsewhere. “With good planning, good ripping, and good practices, roads can virtually disappear,” Stahl says.

Tessa Wittman earned her bachelor of science in wildlife biology and environment and natural resources from the University of Wyoming. She currently works as a research scientist in the Ruckelshaus Institute assessing wildlife-livestock conflict on public lands in the American West.