If Bark-Beetle-Killed Trees Aren’t Using the Water, Where is it Going?

“We call them zombie trees.”

Spruce beetles, like many other bark beetles, kill trees by exposing them to a blue stain fungus, which colonizes in the xylem, the part of the wood that transports water. The fungus prevents water from traveling up the trunk to the branches and needles. As the tree dries out, it becomes akin to the “living dead” because scientists, like Ewers, do not know exactly when it dies. Eventually, the tree turns brown, loses all its needles, and years later topples to the forest floor.

Bark beetle impacts are different from other common forest disturbances such as wildfire or logging because the standing dead trees can change the ecological functions of a forest, such as water and carbon cycles, without immediately changing forest density. Like the zombies in movies, these trees look alive for a few months without “breathing” in carbon dioxide from the atmosphere or “feeding” on water or nutrients in the soil. Managers, and citizens who rely on water and other forest resources, want to know exactly how all these standing dead trees are changing the forest.

As a botanist, Ewers is a critical part of an interdisciplinary team of University of Wyoming scientists affiliated with the Wyoming Center for Environmental Hydrology and Geophysics (WyCEHG, pronounced why-keg). Initially, WyCEHG scientists wondered if there would be more water available in rivers and streams because of the decrease in water uptake from dead and dying trees. But stream flow analysis showed there is not more water in the streams now than before the beetle outbreak. This discovery led to a new research question: Where did the missing water go?

Steve Holbrook, a geophysics professor and one of WyCEHG’s principle investigators, posits a couple of hypotheses. “One possible location of the ‘missing water’ is that it sinks into the soil and ultimately groundwater, where it might reside for years before reappearing in streams…. An alternative hypothesis is that the water gets used by new growth in the ‘understory’ of the forests.” WyCEHG researchers are on a mission to figure out if one of these answers is correct.

Like any good zombie hunter, one of Ewers’ scientific tools is a shotgun. He shoots high branches and collects them to learn more about trees attacked by spruce beetles near the Glacier Lakes Ecosystem Experiment Site (GLEES) nine miles northwest of Centennial, Wyoming. At GLEES, University of Wyoming scientists partner with the U.S. Forest Service to monitor spruce beetle impacts and assess how this epidemic has changed forest conditions. Data collected and analyzed from GLEES will not only inform local management in this forest, but can also inform regional and national natural resource policies and practices for other areas affected by bark beetles.

Throughout the western United States and Canada, bark beetles have been attacking in exceptionally high numbers, and changing forest landscapes. The beetles target the biggest trees first, boring through protective layers of bark and introducing the blue stain fungus—the real killer. Small, bubbled masses of viscous resin along the trunk reveal the beetles’ presence. These “pitch tubes,” along with bark dust from the boring process, indicate the tree has succumbed to this widespread epidemic.

Yet, bark beetles are not a new forest resident. During endemic or “normal” conditions, bark beetles attack small stands of weak trees, ultimately contributing to a healthy forest environment. Cold fall and spring temperatures in high altitude regions can kill off bark beetle larvae and regulate the population. But in the last decade, warmer temperatures have allowed beetle populations to skyrocket, drought conditions have weakened trees, making them more vulnerable, and many tree stands are at an optimal age and size for bark beetles. These factors have led to epidemic conditions throughout the forests of western North America. 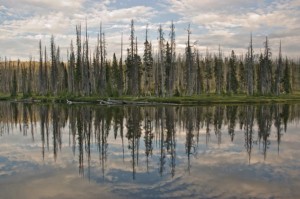 Maps of the earth’s underground structure from these and other geophysical tools also let scientists like geophysicist Holbrook identify pathways water might take in the ground and estimate water quantities in the soil and deeper aquifers.

“By comparing the amounts of water residing in the subsurface between beetle-affected and healthy tree stands, we can test the competing hypotheses for the fate of the missing water,” said Holbrook.

These geophysical images show just part of the story WyCEHG is trying to piece together. Other WyCEHG researchers are studying surface water in streams, snowpack quantities and composition, and water vapor in the atmosphere to determine where water not used by dead trees is going.

The GLEES research station, managed by the Forest Service’s Rocky Mountain Research Station, is in a forest of Wyoming Engelmann spruce and subalpine fir trees. Researchers working here have been opportunely situated to watch the spruce beetle epidemic unfold. Photos taken throughout the 2000s from the top of a research tower show the progression of the spruce beetle outbreak through the forest. Unlike other species of bark beetle, such as the well-known mountain pine beetle with a yearlong life cycle, spruce beetles have a two-year life cycle. Therefore, visual evidence of the outbreak, in the form of dead and dying trees, was not apparent in this area until 2010 although epidemic conditions began around 2008.

Since the 1930’s, researchers have gathered data about high alpine and subalpine ecological functions in and around GLEES. In the 1960’s, the Snowy Range Observatory collected metrological data about temperature and precipitation at the site. In more recent decades, the Rocky Mountain Forest and Range Experiment Station officially established GLEES to collect data related to atmospheric conditions and study the influence of climate change.

With visual evidence and decades of baseline data at their disposal, scientists are learning how the spruce beetle epidemic is changing the forest around GLEES.  They are amassing water, snow, soil, and metrological data in a large database. The WyCEHG researchers haven’t been working long enough to find the missing water just yet, but these long-term data sets are starting to help scientists understand changes in the ecosystem, and consequently inform better management of beetle-killed forests.

“There are still big questions about how the beetles are affecting stream flow in the region,” says Scott Miller, a watershed hydrology professor and another WyCEHG principle investigator.  “These basic questions are essential to water resources management since they determine how much water is available to municipalities, agriculture, or ecosystem services.”

In a changing world with changing forest ecosystems, research gathered by WyCEHG and other scientists at GLEES can be vitally important to Wyoming and other western states grappling with issues related to water management.

Elizabeth Nysson is an education, outreach, and diversity coordinator for Wyoming’s Experimental Program to Stimulate Competitive Research (EpSCOR) at the University of Wyoming.