The US Supreme Court Decides a Wyoming Property Rights Case

In 1909 the United States granted the Laramie, Hahn’s Peak & Pacific Railway Company a right-of-way to construct a railroad in southeast Wyoming from Laramie to Centennial, south to Albany, through Fox Park, and on to Coalmont, Colorado. 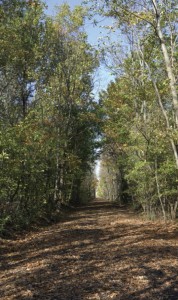 The railway line was not terribly successful and it changed ownership a number of times over the years, finally residing with the Wyoming and Colorado Railroad in 1987. After a failed attempt to turn it into a tourist attraction, the company announced in 1996 plans to abandon the right-of-way and the abandonment was finalized in 2003.

Meanwhile in February 1976, the Brandt family, through trades and a purchase, acquired eighty-three acres from the Medicine Bow National Forest in Fox Park, Wyoming, including a stretch of the railroad right-of-way, to build a sawmill and cabins.

Marvin Brandt, through his legal counsel, Mountain States Legal Foundation, was the only landowner to contest the Forest Service’s action. He argued that the he and his family owned the entirety of the parcel, including the abandoned right-of-way. A legal battle over the railroad’s abandoned interest ensued, first in the federal court in Cheyenne, then at the Tenth Circuit Court of Appeals in Denver.

While the case made its way through the legal system, the Forest Service proceeded to construct the twenty-one-mile recreational Medicine Bow Rail-Trail, transecting the Brandt property in Fox Park.

Owning land is like owning a bundle of sticks. Each stick represents a right related directly to the land, and each right can be separately owned, sold, and added back to the bundle. When the United States granted a right-of-way to the Laramie, Hahn’s Peak & Pacific Railway Company (LHP&P), pursuant to the General Railroad Right-of-Way Act of 1875, it gave away one stick out of the bundle. The stick allowed LHP&P to use a portion of land for a specific and limited purpose—to build and operate a railroad. The United States retained the remainder of these proverbial sticks. In 1976, the Federal government transferred the sticks associated with eighty-three acres of land in Fox Park to the Brandt family.

The Brandts argued that they had full control and ownership of the right-of-way across their property. The right-of-way, they said, constituted an easement, and under traditional legal principles, once an easement is abandoned, the land underlying the easement simply becomes unburdened. In other words, the stick representing the railroad’s right to access the land rejoined the rest of the sticks in the Brandts’ bundle.

The Forest Service, on the other hand, argued that the General Railroad Right-of-Way Act of 1875 granted something more than an easement. The government gave the railroad company a property right for the railway. If the railroad ever stopped using the land for that purpose, the Forest Service argued, the right-of-way would return to the US government.

The Supreme Court determined that the General Railroad Right-of-Way Act of 1875 only granted a right-of-way, unlike earlier, more generous statutes. To encourage development and settlement in the American West, these earlier statues granted railroad companies rights-of-way through public lands, along with outright grants of land along those rights-of-way. One result of these generous statutes is the checkerboard pattern of publicly and privately owned land across Wyoming and much of the west.

In 1872, however, Congress stated that public lands would, from then on, be held or transferred for the purposes of settlement and education. In subsequent legislation, like the 1875 Right-of-Way Act, Congress only granted rights-of-way across public lands, without accompanying grants of land. The Brandt family relied on this policy shift to argue that the right-of-way granted to the LHP&P Railroad was nothing more than an easement.

Additionally, the Brandt family relied upon Great Northern Railway Co. v. United States, an earlier Supreme Court case in which the federal government had admitted that any right-of-way granted pursuant to the 1875 Right-of-Way Act gave an easement and nothing more.

Ultimately, the Supreme Court agreed with the Brandts. It found that all the government had given to LHP&P was an easement, which, once abandoned, simply reverted to the landowners. The Supreme Court determined that any interest in the right-of-way belonged to the Brandt family, and not the Forest Service. It was up to the Brandts to say whether or not a recreational trail could traverse their property.

The immediate implications for the Medicine Bow Rail-Trail are not as significant as the potential overall impact of the Supreme Court’s decision may be to other existing, and future rails-to-trails on federally granted rights-of-way. As Brandt was the only landowner to object to the Forest Service’s action, only the portion of the Medicine Bow Rail-Trail on his property will have to be re-routed. An adjacent Forest Service road is available as alternative route.

The solution for other existing rails-to-trails will likely not be as simple. As the lone dissenting voice in Brandt v. United States, Justice Sonia Sotomayor cautioned that “today, the Court undermines the legality of thousands of miles of former rights-of-way that the public now enjoys as means of transportation and recreation. And lawsuits challenging the conversion of former rails to recreational trails alone may well cost American taxpayers hundreds of millions of dollars.”[1]

One of the complicating factors in determining the potential impact of this decision is the fact that the Federal government does not have a record of how many miles of recreational trails have been built on abandoned federally granted rights-of-way. Not every mile of every rail-to-trail will be affected, but those built on federally granted rights-of-way may face challenges. To avoid right-of-way challenges, many trail builders have relied on the 1994 Trails Act, which enables “rail-banking.” Rail-banking allows the federal government to preserve the unused, but not yet abandoned, railway right-of-way for future railroad use by converting it to a multi-use trail in the interim.

It is certainly not every day that a case originating in Wyoming makes it to the United States Supreme Court. Time will tell whether or not this Wyoming based property law case will derail the rails-to-trails program.

By Bailey Schreiber and Temple Stoellinger

Bailey Schreiber is concurrently seeking a law degree from the University of Wyoming College of Law and a master’s degree from the Haub School of Environment and Natural Resources.

Temple Stoellinger is the Deputy Director of the UW College of Law’s Center for Law and Energy Resources in the Rockies and Adjunct Assistant Professor for the Haub School of Environment and Natural Resources.

The authors would like to thank Steven Lechner, Mountain States Legal Foundation Vice President and Chief Legal Officer, for his presentation at the University of Wyoming College of Law on February 13, 2014, and for providing his outline of the case.