Just south of where the Little Snake River meanders along the Colorado-Wyoming border, silvery green sagebrush and mountain scrub grow above a fortune of hydrocarbons. An estimated 9.9 trillion cubic feet of natural gas is buried in a reservoir 8,000 feet below. Part of that reservoir sits beneath Roger Stull’s land, where he enjoys a quiet ranching life. But that quiet is about to be disrupted by energy development—not to produce the gas below Stull’s property, but to access gas below public lands miles away. As a recent court case affirms, landowners throughout the West could see expanding infrastructure on their properties for energy production on nearby public lands.

The gnarled fence posts that stipple the landscape only hint at the fragmented property ownership in this area. Ranchers own much of the surface, and the federal government owns most of the valuable subsurface resources. Such “split estates” exist on nearly 58 million acres, mostly in the western United States.

Split estates are the progeny of laws, including the Stock Raising Homestead Act of 1916, that enticed pioneers west with the promise of free land. Unlike prior land disposal laws, the Stock Raising Homestead Act divided the property: the federal government retained the underground minerals while granting homesteaders “strictly the surface of the land.” The purpose, according to Congress, was “to reserve to the United States the ownership and right to dispose of all minerals underlying the surface.” The government could sell, lease, use, manage, regulate, or otherwise “dispose” of the minerals, and could access the surface to extract them. Those rights still exist today, although the methods and scale of mineral development are nearly unrecognizable from a century ago.

The story of Stull’s ranch begins in 1923. That December, the US Land Office granted Robert B. Adams’ petition to homestead a small parcel in the Little Snake River Valley. Adams wrote:

There is just sufficient land that can be cultivated to raise forage crops to feed the stock during the long winter months. The most of the land is suitable only for grazing purposes … It will make excellent pasture but is valueless for any other purpose.

For the first 75 years after Adams received his land, the minerals were mostly untouched. Then in 1999 the Bureau of Land Management, which handles federal minerals, consolidated nearly 40 square miles of oil and gas leases, including those under Adams’ homestead, now owned by Stull. Authorized by the Mineral Leasing Act, such unitization is one of the many ways the federal government can dispose of its minerals. The process combines multiple belowground parcels into one large parcel to promote orderly and efficient mineral development and encourage exploration in unproven areas. Stull, as a surface owner, was not required or invited to participate in unit negotiations.

Mineral development picked up on the Focus Ranch Unit, as it was named. By 2009, developers had drilled three successful wells adjacent to Stull’s property. They accessed two of these wells via a road across Stull’s ranch with his permission. But when the unit operator breached the terms for access, Stull revoked that permission. 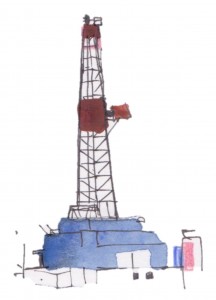 Western split estate landowners know their land may be subjected to energy development by the mineral owner, and Stull acknowledged that the Stock Raising Homestead Act entitled the unit operator, Entek, to use his surface to access the minerals beneath his property. But he asserted that using his land to access minerals under other properties required his express consent. Unable to reroute the access road across BLM land due to sage grouse concerns and failing in negotiations with Stull, Entek sued to force Stull to give access across his property.

Stull lost. In 2014, the Tenth Circuit Court of Appeals permitted Entek to establish an access route across Stull’s land to reach its production on nearby federal land. Relying on provisions of the Mineral Leasing Act and the Stock Raising Homestead Act, the court found that in unitizing the minerals, the secretary had “eliminate[d] internal property boundaries within the unit area” thus allowing operations “without regard to internal ownership boundaries.” The unit operator could use as much of Stull’s land as it needed, in whatever way it found reasonably necessary to develop any of the 40-square-mile unit. The court viewed the entire consolidated unit as one lease. As a result, the right to use the surface of the leased parcel applied to all 25,372 acres. Stull’s permission was irrelevant.

December will mark the 100th anniversary of the Stock Raising Homestead Act. At the time of the act’s passage, the Department of the Interior advised Congress that “farmer-stockman” activities could “be carried on without being materially interfered with by the reservation of minerals and the prospecting for and removal of same from the land.” That may no longer be true. The Entek case affirms that private lands may soon bear more mineral development impacts. Mounting pressure to protect habitat and wildlife on public lands, and lengthy and expensive environmental assessments associated with public lands, could further push operators onto private lands within exploratory units.

While the Entek case concerned only roads, the potential ways an operator could use private property are seemingly limitless: gathering lines, wastewater injection wells, man camps, gas storage, drill sites, pits, or any other use related to mineral extraction anywhere in the unit. Just as Adams could not foresee mineral development, and Stull could not have imagined the impacts of unitization on his ranch, future impacts on western landscapes resulting from energy development are likewise unforeseeable.

Tara Righetti is an Assistant Professor specializing in oil and gas law and director of the program in Professional Land Management at the University of Wyoming College of Law.

Of Ranchers and Researchers