Diverting Water from Basin to Basin

In the summer of 1860, farmers in central Colorado found Left Hand Creek dry.[1] They started looking for replacement water. Just over the ridge, South St. Vrain Creek flowed wet, so they dug a ditch to divert its water back to Left Hand Creek. This solved their problem, but later in the summer St. Vrain Creek dried up downstream from the diversion. To take back their water, St. Vrain farmers ripped out part of the Left Hand Ditch.

The Left Hand farmers sued the St. Vrain farmers for destroying their diversion. When the case eventually reached the Colorado Supreme Court, judges ruled in favor of the Left Hand farmers. The court found that the Left Hand farmers had “priority of appropriation,” meaning the water belonged to them because they were the first people to move it and put it to use, regardless of who owned the land adjacent to the waterway.

Thus began water diversion in Colorado. Colorado’s biggest cities are built on water that’s been moved from one side of the mountains to the other. As western communities plan for future growth, they may look for more opportunities to divert water from wet, low-population water basins to drier areas with more people.

Colorado’s geography is ideal for water diversions. The Continental Divide twists along Colorado’s middle like a spine. West of the Continental Divide the state’s mountains collect snow through the winter. While most of the Colorado’s water is west of the divide, 90 percent of the state’s population plus most farms and industry are on the eastern foothills and plains. In the early part of the twentieth century, cities and counties on the Eastern Slope began to commission pipelines and ditches to bring them water from the Western Slope. And, because of legal precedent from the Left Hand case and others, the Eastern Slope has the right to Western Slope water. Today, most Front Range reservoirs hold Western Slope water, piped in through transbasin diversions.

One example is Turquoise Lake, part of the Frying Pan-Arkansas Project. The Frying Pan River starts as snowmelt at the crest of the Rockies near Aspen. Its water serves surrounding communities and ecosystems in the Colorado River headwaters.[2] About fifty years ago construction crews burrowed under the Continental Divide to build the Boustead Tunnel, which pipes Frying Pan water to Turquoise Lake near Leadville.[3] Shaped like a horseshoe, the tunnel has a ten-and-a-half foot diameter, big enough to drive a truck through. It would take strong headlights: the tunnel winds more than five miles under some of the tallest mountains in the West. Boustead can carry 684,603 acre-feet per year. It’s part of a larger network of ditches and tunnels called the Frying Pan-Arkansas Project.[4] Eventually, Frying Pan River water flows out of Turquoise Lake and makes it to the Arkansas River Basin where it serves Colorado Springs and Pueblo.

The Boustead Tunnel is just one of Colorado’s 44 transbasin diversions, 27 of which cross the Continental Divide. Water that crosses the Divide effectively disappears from its original basin.

Colorado may be the poster child of water diversions, but such projects exist in other western states as well. Wyoming currently has one major transbasin diversion that moves water from the Little Snake River Basin west of the Continental Divide to the North Platte River Basin on the east. This is a complicated, multi-step diversion. The city of Cheyenne owns a water right in the Little Snake River, which it diverts over a mountain range to Hog Park Reservoir. From there, the water flows out of the reservoir, down Hog Park Creek, and into the North Platte River. In exchange for dumping its Little Snake River water into the North Platte, Cheyenne pipes water from another North Platte tributary, Douglas Creek, 75 miles from the Medicine Bow Mountains to the city. On average, this diversion moves 10,664 acre-feet of water every year.

Other diversions could one day join Cheyenne’s elaborate system of trades and pipelines in Wyoming. In 2006, Fort Collins businessman Aaron Million proposed a 500-mile transbasin diversion from Flaming Gorge, in southwestern Wyoming, along I-80 to Cheyenne, and then south all the way to Pueblo, Colorado.[5] His goal was to move 250,000 acre-feet of water a year. Million’s permit application was most recently rejected by the Federal Energy Regulatory Commission in 2012 because it didn’t specify how he planned to gain approval for building across federal, state, county, local, and private lands.[6]

More recently, Governor Matt Mead explored transbasin diversion as a potential component of a water strategy for Wyoming.[7] He suggested Wyoming begin planning a pipeline to carry water from the Upper Green River to the North Platte River Basin near Cheyenne. However, following the public comment period for the strategy, this diversion was cut from the water strategy.

Some citizens in Wyoming, Utah, and Colorado strongly opposed these diversion proposals due to concerns about the ramifications to people and ecosystems in the water’s original basins. They worried that taking water out of the Green River would hurt trout and salmon, dry up wetlands, spread cheatgrass, and otherwise damage the ecosystem. Also, they’re concerned that decreasing Flaming Gorge Reservoir’s water level could affect the local recreation economy and potentially force the government to spend money on construction of new recreation infrastructure.[8] 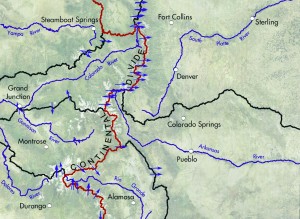 Meanwhile, if towns in Wyoming’s North Platte River Basin grow at all in the future, they will be looking for more water. Like in Colorado, most of Wyoming’s snowfall and major rivers are west of the Continental Divide, while the human population and agriculture is east of the divide. By some analyses, Wyoming is already using all the water it has a right to in the North Platte River, while there still remains unused water in Wyoming’s allocation of the Green River, which is a tributary of the Colorado River. The 1922 Colorado River Compact allocated each of the states in the Colorado River Basin a certain amount of water. Depending on conditions, Wyoming gets roughly 1.04 million acre-feet, about 250,000 of which are currently not being used. As water supplies become more strained in the west, someone will figure out how store, use, or divert that water.

Despite the failure of recent Wyoming transbasin diversion proposals, it’s likely that businesspeople and water managers will continue to explore them. As water becomes scarcer and people more plentiful in Wyoming, the tug-of-war over water will become more pronounced, and the population centers, like Casper and Cheyenne in Wyoming, may look west of the Continental Divide in their search for water. Transbasin diversions could reappear on Wyoming’s water horizon in the future.

Erin Jones is pursuing a master of fine arts in creative nonfiction writing and environment and natural resources at the University of Wyoming.