This story is a sidebar to Supercomputer-Powered Model Improves Water Planning: A Hi-Resolution Hydrologic Model Peers into the Future of Western Water. 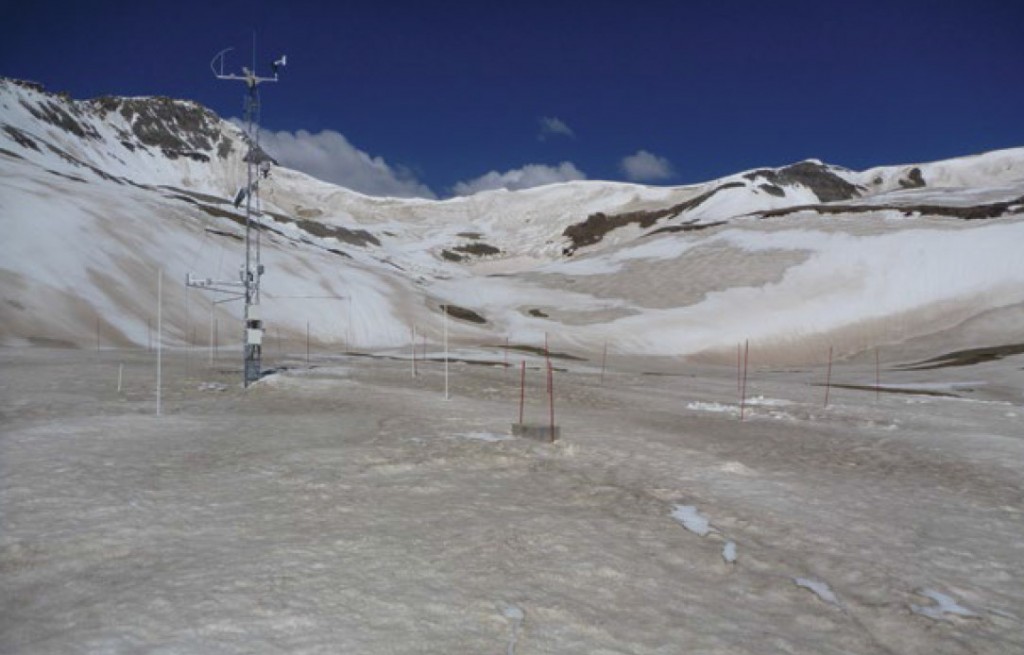 Some 40 million people rely on the Colorado River, and much of its water comes from snowmelt. So when something big changes in the watershed, like the timing of the spring melt, water managers and water users get nervous. Everyone has been hearing that warmer weather is leading to earlier spring runoff, but now researchers are studying another factor that has an even bigger effect than temperature on snowmelt timing: dust.

A dirty Rocky Mountain snow pack is more than just an eyesore. Dust-covered snow concentrates the sun’s energy as the darker snow absorbs more solar radiation, leading to faster snow melt and a shorter runoff season. This can cause trouble for farms and cities that rely on a steady flow of water through the summer. Most of the dust that falls on snowfields feeding the Colorado River is stirred up by human activities like construction, ATV use, and ranching in the desert southwest.

Researchers are quantifying the effects of dust on snow. And, following the spring of 2009, which brought an order of magnitude increase in dust deposition to the mountains of the Upper Colorado River Basin over that observed in earlier years, they are trying to understand exactly where the dust comes from and to predict what kinds of dust events we might see in the coming years and decades. Finding solutions to the dust-on-snow problem will require sound science and continuing research.

Dr. Jeff Deems, Research Scientist at the Cooperative Institute for Research in the Environmental Sciences at the University of Colorado, Boulder, set out to study the dust-on-snow problem with colleagues. Earlier research indicated that dust-on-snow was disrupting normal runoff cycles. Deems’ and his colleagues’ newest work examines extreme dust conditions observed in 2009 and 2010. They are analyzing data from those years to help predict what future snowmelt seasons might look like if climate change and other factors make dust deposition worse.

To better understand how dust affects snowmelt, Deems and his colleagues skied for miles out to research sites high in the Colorado Rockies—above 13,000 feet in elevation—to measure the solar radiation the snow pack absorbs under different dust conditions. They faced challenging conditions, as they often skied in late spring on a fast-melting snow pack, hauling packs full of research equipment and constantly assessing avalanche danger and weather conditions.

They conducted their research near meteorological instrumentation towers at several research sites, including one site in Colorado’s San Juan Mountains called the Senator Beck Basin Study Area, maintained by the Center for Snow and Avalanche Studies. “These towers do something that’s unique,” Deems said. “They measure the complete snow surface energy balance, that is, all incoming and outgoing energy affecting the snow pack, including solar radiation, longwave radiation, air temperature, wind speed, and evaporation.” By conducting their field observations next to these stations, the researchers were able to put their measurements in the context of the meteorological and energy data collected by the towers.

The towers automatically send their data to the Center for Snow and Avalanche Studies office in Silverton, Colorado. Deems and his colleagues dug snow pits to reveal the layers of dust sandwiched in the snow pack. And they used data from the towers to calculate the fraction of light reflected from the snow. Normally, fresh snow reflects about 90 percent of incoming energy. Springtime snow typically reflects 70 percent, as snow crystals naturally become coarser due to freeze-thaw cycles. However, dust on the snow can reduce this percentage dramatically, and measurements have shown that dusty snow can reflect as little as 30 percent of incoming energy, which is close to the reflectivity of plain old dirt.

Deems and his colleagues have determined that dusty snow melts three to seven weeks earlier than clean snow. Since snow pack provides the western U.S. with 80 percent of its water supply, the faster melting of the snow and the shorter runoff season is a critical problem. Earlier and faster runoff means all the water that would have been stored in the snow pack into summer instead rushes down the rivers too soon.

Reservoirs in the Upper Colorado River Basin, the part of the basin upstream from Lake Powell, can only hold so much water. Earlier runoff can mean they have to release excess water early and there may not be enough water stored for later in the season. Earlier melt also exposes bare ground up in the mountains where water is lost to evaporation and plant transpiration. That means less water makes it into the rivers overall, which exacerbates shortages in already over-allocated rivers downstream.

Agriculture, which uses 70-80 percent of the surface water runoff throughout the western U.S., will feel the brunt of these shortages. As water becomes scarcer and more valuable, there will be increasing pressure to divert it away from agriculture to cities. Wildlife could also suffer, including pikas and other alpine species that rely on a substantial snow pack. Fluctuating river volume and water temperatures could affect fish survival. White water recreationists and the businesses that rely on these rafters and kayakers could also face a shorter season. The diminished snow pack and shortened runoff could also lead to longer and more damaging fire seasons.

The dust settling on the snowy landscapes of Colorado and beyond comes from a variety of sources, and has increased significantly since the westward expansion of the U.S. in the mid-1800s. Much of the dust that falls in the Rocky Mountains comes from the desert southwest. “Dust shows up on the front edge of the storm and in most cases is immediately buried by fresh snow fall,” Deems said. The southwest deserts are not naturally dusty, as long as the naturally occurring crust that anchors the soil is intact.

This biological crust, which includes colonies of moss, lichen, and cyanobacteria, makes the land resistant to wind erosion. However, grazing, oil and gas development, dry land farming, motorized and non-motorized recreation, and other disturbances over that last 165 years have damaged the crust, making it susceptible to erosion.

Abandoned croplands and cleared construction sites add to the dilemma, as they are often colonized by annual weeds that do not germinate in droughts, leaving the soil bare. Dirt roads also contribute. Southeastern Utah alone has over 6,000 miles of ATV tracks. The faster a vehicle drives, the more dust it sends into the air. Recent droughts and wind events are worsening erosion.

Controlling this problem would require stabilizing soils in southwestern deserts. “Keeping [off-road vehicle] speed down helps immensely,” said Dr. Jayne Belnap, Research Ecologist for the U.S. Geological Survey Moab office. “We need to really start thinking about dust production when we do certain activities. We need to be smarter about what disturbance happens—where, when, and how much.”

Many current policies focus only on replacing vegetation after a disturbance instead of evaluating soil stability as a whole.

Researchers found that reducing dust outputs could be an important part of climate adaption strategies in the region. Though a few government agencies and communities are taking steps to address these problems, dust erosion is likely to get worse.