Asking Big Questions About Hydrology in One Little Watershed

Square solar panels congregate on weathered tree stumps in a small open area in the Medicine Bow National Forest. Filaments of sunlight stream through the dense pines and reflect off the photovoltaics. Under one tree sits a white metal rectangular box with a cable running from its base through the clearing. With trees entwined by electrical cords, the scene would likely puzzle any hiker who stumbled across this remote mountain area. 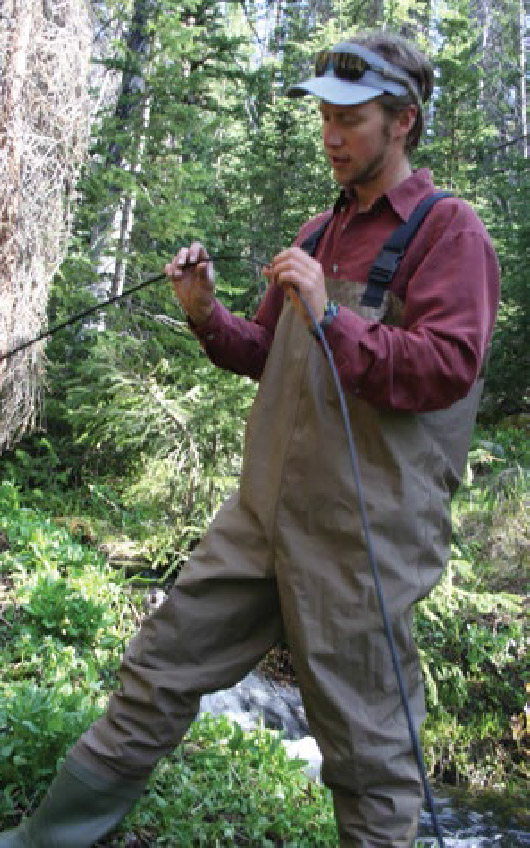 This is a study site in the No-Name Watershed, a little 300-acre (about half a square mile) drainage in the Medicine Bow Mountains of south central Wyoming. No-Name Creek starts as snow melt and trickles downhill for about one kilometer to Libby Creek, which eventually meets the Little Laramie River. Steep slopes cloaked in subalpine fir and Engelmann spruce characterize the No-Name Watershed, and a limestone escarpment marks one edge of this rugged area. On maps of the mountain range, it’s just a tiny nameless thumbprint, but this little pocket of forest could hold answers to some of the most cutting-edge questions about subalpine hydrology.

The futuristic collection of equipment tucked into this clearing is part of an ambitious, multi-year, interdisciplinary research project being conducted by scientists and graduate students from the University of Wyoming. Roughly twenty researchers and students from seven departments are concentrating their research in the No-Name Watershed to learn how water moves through mountain environments. Growing demands on water throughout the West mean it is increasingly important to understand how water moves from high subalpine areas into the rivers and streams that support communities hundreds of miles downstream. But no single research discipline has all the tools needed to fully analyze subalpine hydrology. The only way to really comprehend the processes that control water in this system is through interdisciplinary collaboration, an idea that’s a bit out-of-the-box for most university academics.

Crouched behind the solar panels in late June, geology and geophysics graduate student Drew Thayer is setting the controls on a fiber-optic Distributed Temperature Sensor. After he finishes, he and his research team unroll a thin black fiber-optic cable through the forest to No-Name Creek. Small boulders and bright green moss line the swift, narrow current. The team members weave the cable under fallen trees and limbs that crisscross the stream. The cable, which connects to a solar-powered computer housed inside the metal box back in the clearing, will collect water temperatures. These data will be paired with air and soil temperatures collected by other researchers to start to describe the watershed in minute, scientific detail. Like the little mountain creek flowing through this study site, the research here started as a trickle, and now rushes like spring snow melt. 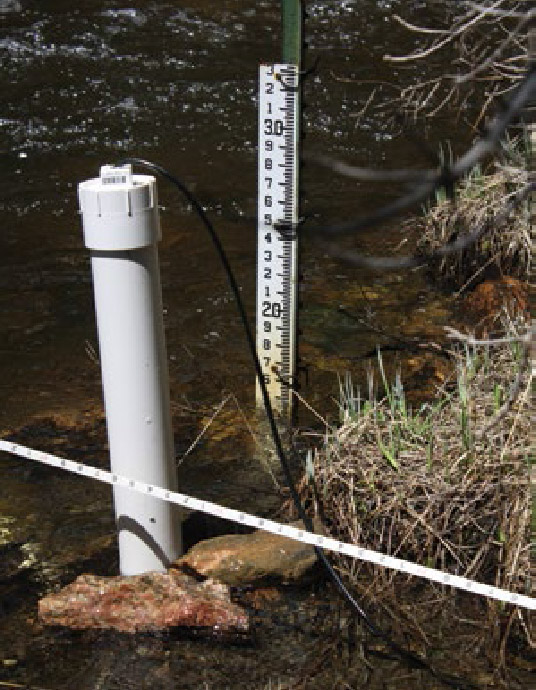 In 2007, UW ecosystem scientists Ginger Paige and Scott Miller set out to look for a small watershed to use as a research site. After some investigation near the Snowy Range, Paige and Miller found this nameless little drainage at about 9,500 feet of elevation. A stream monitoring gauge had been installed in Libby Creek where the waters converge. At an appropriate size and with some historical data already available, the team decided No-Name would meet their needs.

Concentrating research in a small watershed is by design. “As you go out to a larger watershed you can no longer adequately describe how point-scale processes like snow melt and rainfall result in stream flow and groundwater recharge without a lot of uncertainty,” says Miller. Focusing on No-Name allows researchers to more accurately answer questions about how and where water moves through the environment. These answers will inform understanding of larger watersheds.

In 2012, five years after Miller, Paige and a few other colleagues installed baseline hydrologic instrumentation and began to measure components of the water balance, No-Name research suddenly increased with an infusion of funds from the National Science Foundation through Wyoming’s Experimental Program to Stimulate Competitive Research. This award, for which Miller is a principle investor, created the Wyoming Center for Environmental Hydrology and Geophysics (WyCEHG), a multidisciplinary research center at the University of Wyoming.

One of the first students to develop a long-term project at No-Name with WyCEHG funding was Alan Klatt, a field hydrology graduate student under Miller. Starting in the spring of 2012, he installed ten gauging stations to monitor water flow in No-Name Creek and has managed two meteorological stations that measure precipitation entering the watershed. 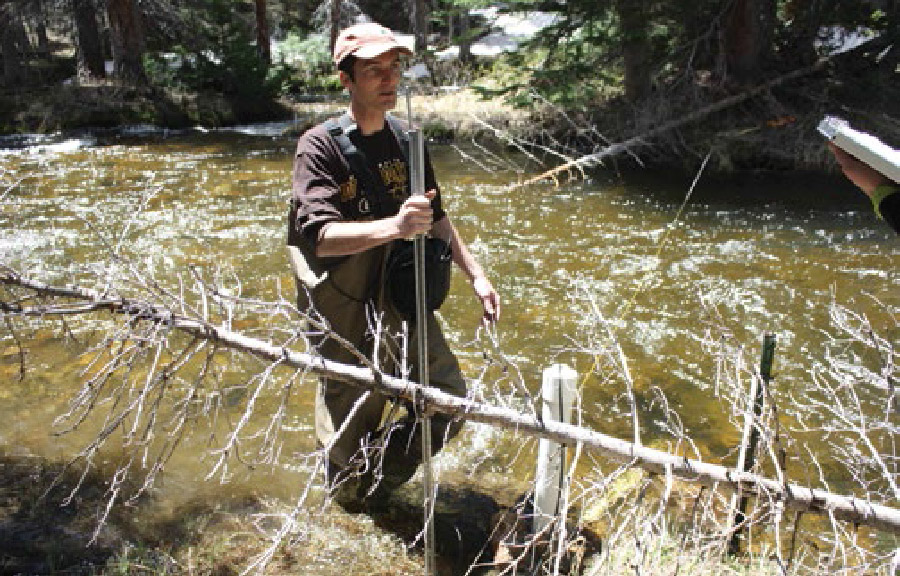 Over the next two years, research in No-Name Watershed quadrupled. A team of plant physiologists led by Professor Brent Ewers is measuring evapotranspiration to account for the water that escapes from trees and understory plants. Other researchers are calculating how trees take up water, modeling future forest conditions, mapping vegetation, and surveying trees killed by bark beetles. A group of geophysics students and faculty are using electrical resistivity to generate a two-dimensional image of water underground. Still more studies are looking at weather and atmospheric conditions, such as air temperature and humidity. During the winter, Assistant Professor Noriaki Ohara is modeling snow pack dynamics and joining other researchers working to better understand snowmelt. There is an array of studies related to surface water conditions in which teams are investigating surface water flow, analyzing how water flows through soils, and understanding the chemistry of water. Klatt explains, “The water cycle has many complex components and requires an interdisciplinary group of experts working together to understand the whole system.”

Even without a name, researchers hope this little watershed will lead to big discoveries. As the project continues, WyCEHG researchers will piece together the most thorough picture of subalpine hydrology ever produced by science. This research will not only build knowledge within the scientific community, but also inform managers in the West and give students like Klatt and Thayer experience to be leaders in water-science fields in the future.

Elizabeth Nysson is the education, outreach, and diversity coordinator for Wyoming’s Experimental Program to Stimulate Competitive Research (EPSCoR) at the University of Wyoming.