On a hazy evening the streets of Jackson blur with summer tourists. Laughter and chitchat rises from outdoor patios like bubbles in a fizzy drink. In addition to the usual food, beverage, and music to cap off a day sightseeing Yellowstone or rafting the Snake, tourists tonight enjoy Jackson’s Art Walk. Every summer Thursday, the galleries, usually closed by dinnertime, open their doors to casual observers and serious buyers alike. Inside big-paned windows, I see people moving in waves through well-lit, colorful rooms. I watch a couple in plaid shirts hold hands as they walk past scenes of big mountains, big rivers, and big animals. Three smiling ladies with tall hair and heavy jewelry sip wine from Dixie cups. The gallery owner, wearing a bolo tie with a plum-sized turquoise fastener, smiles at whoever walks in the door. 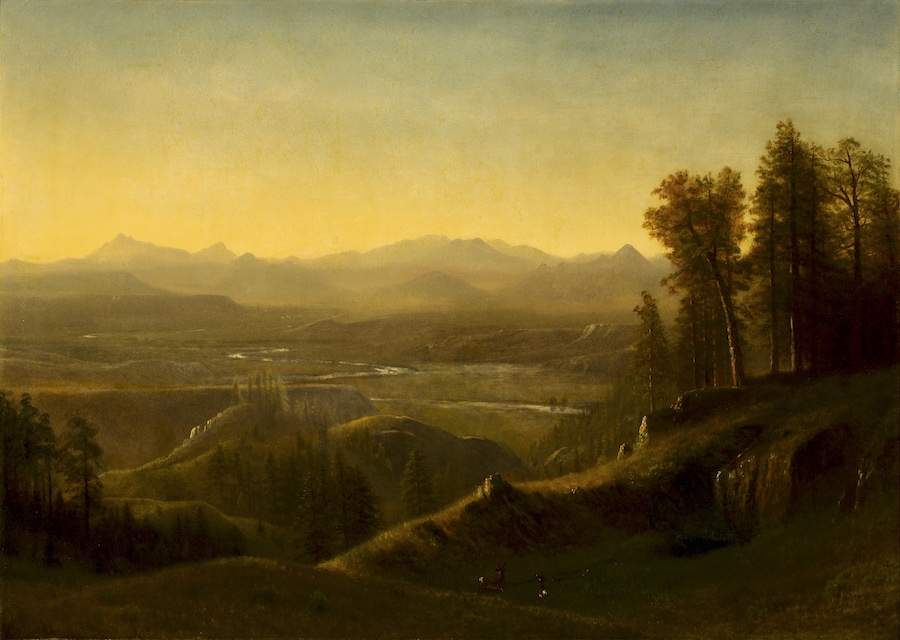 Visitors looking for art in Jackson will find the National Museum of Wildlife Art, the Jackson Hole Galleries Association, thirty-some diverse galleries, the Center for the Arts, and a month-long summer arts festival. In the last decade, thanks in large part to the Jackson Hole Art Auction, the town has become one of the premier art centers in the country alongside cities such as New York, San Francisco, Scottsdale, and Santa Fe. Going on its ninth year, the auction draws serious western art collectors from around the globe. “A lot of the clients do the rounds—from California to here, to New York,” Joan Griffith, Director of Trailside Galleries, explained.

I came to Jackson to glimpse this national art hub at its peak. This first week in September marks the beginning of Jackson’s month-long art season. With the art auction just two weeks away, I have a view into the world of fine western art and its allure for collectors. I’m here to meet the people who work in the galleries, to see the art, and to try to learn why the western fine art scene in Jackson evokes such passion from all involved.

The current of the crowd sweeps me past the elk antler arches in the town square to Trailside Galleries, and I duck out of the hazy street into the warm light. The gallery, a fixture of Jackson’s traditional western fine art scene since 1963, houses this year’s auction pieces. Tonight there also happens to be a reception for five prominent western artists, and the gallery is packed.

I work my way past overstuffed leather couches surrounding a two-story fireplace. A hired bartender hands me a Chardonnay. It’s a good pour in a real glass. I pluck a bacon-wrapped goat-cheese-stuffed date from a platter that is circling the room. A little terrier sits serenely in her owner’s arm as if born to be amongst the art and I overhear the owner say, “She prefers impressionistic art of wildlife running.”

Three of the five artists mill about close to their work. Painter Jim Norton wears a straw cowboy hat and a blazer over a plaid shirt. He brought his brushes and touches up a painting to the crowd’s delight. I overhear him describe being at a bison sanctuary with his personal photographer when the herd spooked, the resulting stampede nearly sweeping the two men up.

His audience seems eager to hear such real-life stories of ruggedness and adventure, then to connect such experiences to the paintings that hang on the wall. One collector told me, “I’m interested in the artist, the story of the artist.”

Working in the fine art world requires an eye for aesthetics, yes, but more than anything else it requires people skills. Earlier, Diehl Gallery’s art dealer Kiera Wakeman confirmed, “It’s a lot about trust. The best thing you can do is really be straight up with a client if a piece will look good or bad in their home.”

Trust is important both in the galleries and in the lead up to bidding on auction pieces.

After I’ve consumed more than the appropriate amount of bacon-wrapped dates, I head upstairs to see this year’s auction pieces. Earlier in the day Jill Callahan, Jackson Hole Art Auction Coordinator, described the auctions. “We’ve really defined ourselves as the wildlife art auction,” she said. Unlike the Christie’s and Sotheby’s auctions you might imagine, Jackson’s auctions are always lively and fast-paced, moving at the speed of cattle-auctions.

During the auction, one of Griffith’s jobs is handling phones. As many as ten clients may bid on one lot. Griffith sometimes holds two phones at a time, bids going as high as a million dollars. Last year, her most tense moment involved a client on a private jet.

“And I tell him,” she said, “‘It’s goin’ pretty fast, seven to ten lots out,’ and he says, ‘Darlin’ we’re about to land! I’ll have to call you back.’ I’m sweating bullets and time is a-ticking…”

She did connect with him before the bidding started, but he fell short of the winning price.

I move around the upstairs space past some of the finest pieces of western art in the world. I’m looking for clues about what captures the fascination of western art collectors who will bid in this year’s auction. I stop at a white tag that projects an estimated selling price of $1-2 million dollars (Lot 184, Albert Bierstadt [1830-1902], Wind River Country Wyoming [ca. 1860], oil on canvas, 28.25 x 39.5 inches).

In an ornate metallic frame, cliffs and trees open up to an oxbow river winding through a valley. Jagged mountain peaks rise into dim yellow light of either a sunset or a sunrise. I later read an article that described the piece as “a seemingly endless landscape untouched by the modern world.” 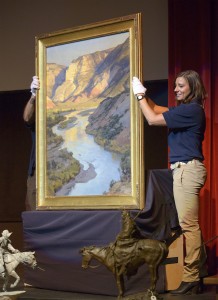 A Clyde Aspevig oil painting on the auction block at the Jackson Hole Art Auction. Photo by Price Chambers.

In an interview on the Cowboy Artists of America’s website, painter Bill Anton, one of the featured artists at tonight’s reception downstairs, is quoted, “If I’m recording anything, I’m recording how I feel about the West.” Works like Anton’s and Bierstadt’s contain drama, history, frontier myths and also truths about what has been lost and what is changing before our eyes. Whether these paintings portray a piece of a landscape that once existed or one imagined, they convey what it feels like to be in a place at a given time.

Two weeks from now, this Bierstadt painting will bring in $800,000 at the Jackson Hole Art Auction, less than anticipated. The auction on the whole will generate $6.5 million, only half as much as the previous year. The decrease reflects an ever-fluctuating art market as well as things like stock market volatility. The money will be divided between the sellers and the Jackson Hole Art Auction.

At its heart, the Jackson art scene is big money and high drama.

Back downstairs the crowd dissipates out into the dusk and I’m still thinking about the allure of the West, and the significance of the images these paintings portray. “This art,” Griffith offers, spreading her arms wide “is important because it represents a history of what happened, how the West came to be. It’s about the evolution of time and the passing of time and you never want to loose a connection to that.”

Carly Fraysier is the 2015/16 Editorial Fellow at Western Confluence magazine. She is studying creative nonfiction writing and environment and natural resources at the University of Wyoming.