The North Sand Hills rise out of Northern Colorado’s high plains like a scene from a science fiction movie. Hundreds of acres of sand and dunes sprawl, unexpectedly, in a land better known for high sagebrush plains and snow-capped mountain ranges. 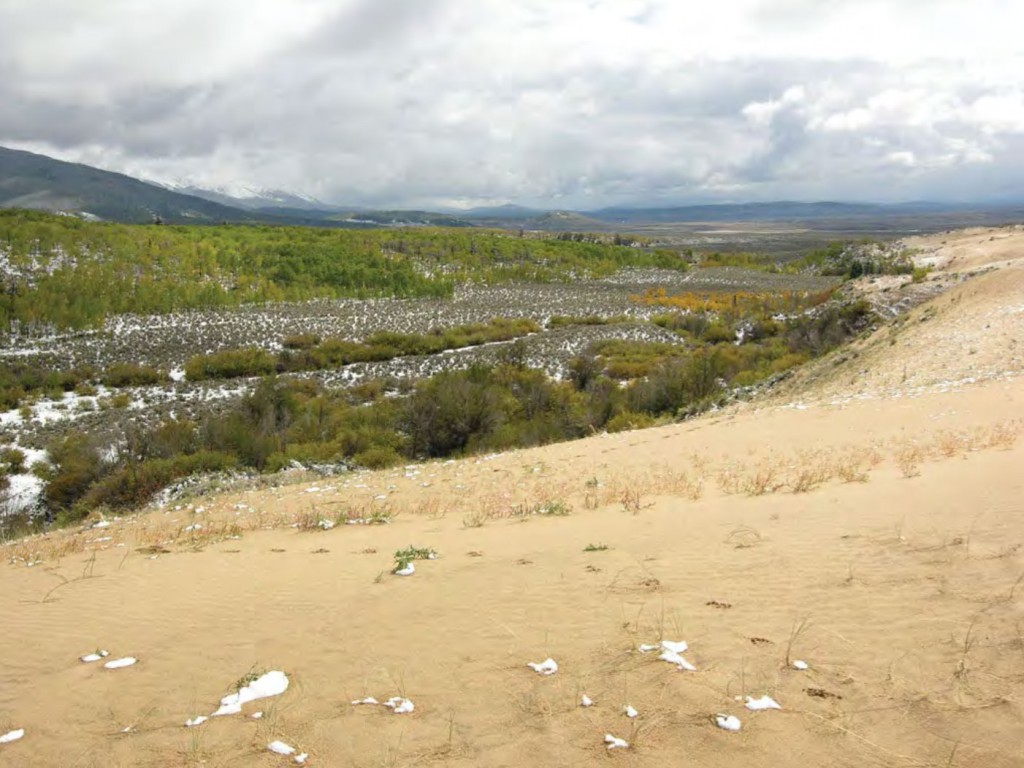 Other than size, though, there’s an important difference between the park and the dunes outside of Walden, Colorado. Unlike the protected Great Sand Dunes, where vehicles are limited to existing roads, you can take your dune buggy on these hills.

“In the Rocky Mountains there’s only a handful of areas where you can put a motor vehicle on sand dunes or anything like sand dunes,” said Jones.

In a world where federal and state regulators have pushed off-roaders to stay on trails as a way to protect habitat, the ability to ride on open sand and just “poke around and see what’s out there” is unique, Jones added. Riders can crisscross the dunes and find unique challenges, successfully making a climb one day but returning the next to find a new challenge as the sand shifts.

“It’s like going to the beach. It’s just fun to go out and play in the sand.”

Plus, the views from the dunes, out towards nearby mountains, are spectacular, said Jones.

That explains why, on a busy holiday weekend, as many as 5,000 off-road enthusiasts pour into the 1,400-acre area managed by the Bureau of Land Management. Jones says the area draws recreationists from Wyoming and all over Colorado, sometimes even further afield.

But while the North Sand Hills are probably best known for their wide-open recreation opportunities, they also harbor a lesser-known attraction. Parts of the dunes are home to the rarest plant in the state of Colorado.

It looks “kind of like a tumbleweed,” said botanist David Anderson, director and chief scientist of the Colorado Natural Heritage Program at Colorado State University, which tracks the status of rare plants statewide. The plant is called boat-shaped bugseed, Corispermum navicula, and it was only discovered in 1996.

“It looks like a green Q-tip that has leaves,” added BLM Colorado state botanist Carol Dawson. “It’s not gorgeous, let me put it that way.”

Despite the plant’s failure on the charisma front, Dawson said she thought it was “pretty damn interesting” to learn the rarest plant in the state had evolved to live on these sand dunes. Another, common bugseed also grows on the dunes, and botanists think at some point in the not-too distant past the rare, boat-shaped bugseed diverged from that species.

Anderson, of the Colorado Natural Heritage Program, agreed. Sand dune complexes in other parts of the West are also known for hosting species that don’t occur anywhere else. Plants often develop to specialize in unique or strange soils, and if you look at the North Sand Hills, a very isolated patch of poor soil, “it’s not terribly surprising that you have a new species evolving on them,” said Anderson.

Once the plant was discovered, and surveys in recent years confirmed it was probably only found in the North Sand Hills, the BLM needed to protect it. The agency’s first stab at a plan, in 2011, proposed setting aside 92 acres of the 1,400-acre sand hill complex as an Area of Critical Environmental Concern. Within that boundary the agency could customize its management strategy to protect the plant.

In the meantime, off-roaders continued to flock to the sand hills, enjoying the dunes like they always had. Each year, as the sport grew in popularity nationwide, so did the number of riders at the Sand Hills, said David Boyd, a public relations specialist for the BLM Colorado’s Northwest Region.

After the original proposal, botanists conducted field surveys to determine just where the plant was found. They found it covered more of the sand hills than they thought. So the agency expanded the critical area to 486 acres, said Boyd.

The new BLM plan, finalized in July 2015, requires off-roaders to stay on designated routes when traveling through this nearly five hundred-acre swath of protected land, which mostly consists of more vegetated parts of the dunes where the boat-shaped bugseed grows. Within this area, buck-and-pole fencing helps keep riders on existing routes and out of key habitat. The area is also closed to livestock grazing, oil and gas exploration, and other types of ground disturbance.

Scott Jones says from his perspectives, the changes have been pretty easy to live with.

His organization also works actively on the Stay the Trail campaign, which educates riders on trail etiquette like staying on designated trails and following travel restrictions.

“And kind of making it cool to do the right thing,” said Jones. “If you do the wrong thing you are risking trails and riding areas and people are really starting to understand that.”

That type of peer-to-peer mentoring seems to be working, at least so far. According to botanist Dawson, the boat-shaped bugseed population is holding steady. So the agency seems to be balancing a careful win-win, preserving both the good fun of motoring up the only ridable sand dunes in Colorado along with protecting the state’s rarest plant. But the botanist also issued a warning.

“We’re not going to lose this plant,” Dawson said.

“So if I go out there and find people are breaking down the fences, yeah, we are going to have to do something different.”

Stephanie Paige Ogburn reports on science and environment in the West from Fort Collins, Colorado. Find more of her work at stephaniepaigeogburn.com.