“If we disconnected that 14-inch pipe and pointed it upward, the water would blast nearly 600 feet into the air,” says Les Hook over the loud hum of the hydro turbine. 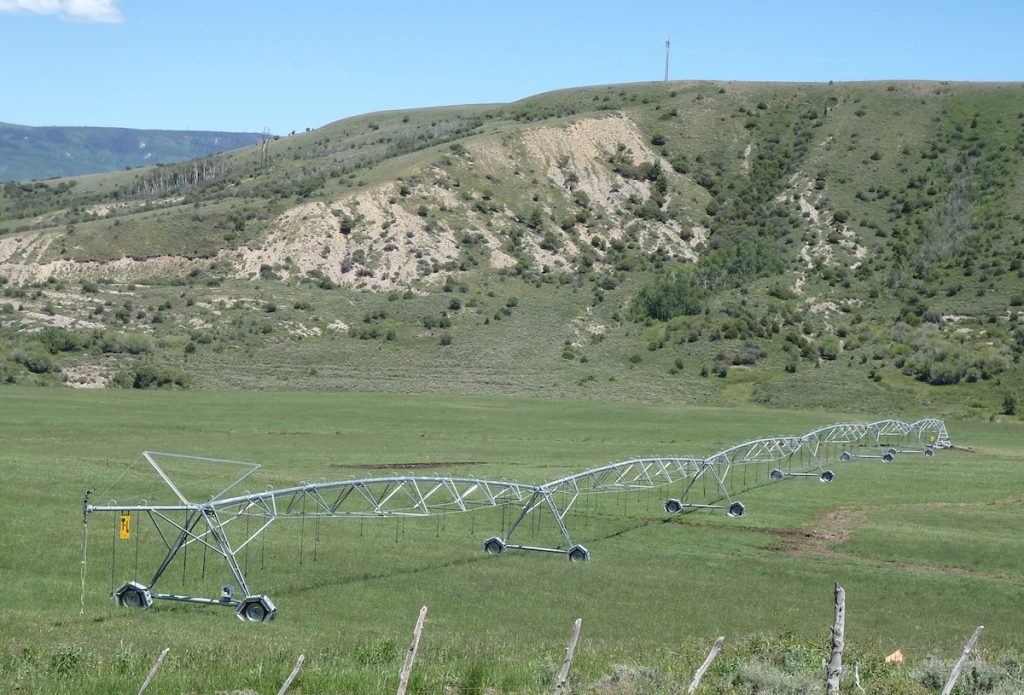 Hydro-powered center-pivot on a ranch in Colorado. Photo by Vance Fulton/NRCS.

Of course, the City of Buffalo public works director would land in jail if he pulled a stunt like that, but his scenario reveals just how much water pressure it takes to turn the 225-kilowatt turbine housed in a mostly underground concrete bunker at the foot of the Bighorn Mountains in north-central Wyoming.

“That turbine is breaking about 250 pounds per square inch of water pressure down to zero,” Hook says. “That’s a heck of a lot of thrust!”

Buffalo, like a growing number of utilities, electric coops, municipalities, irrigation districts, and agricultural producers across the West, is using water and modern technology in the form of hydro turbines to generate “green” electricity. In particular, small-scale hydropower—those projects that produce less than five megawatts of electricity—can provide reliable, low-carbon, renewable energy for decades. And in a mountainous state like Wyoming, with plenty of streams and irrigation canals flowing downhill, the potential for additional small-scale plants like the one in Buffalo is anything but small. 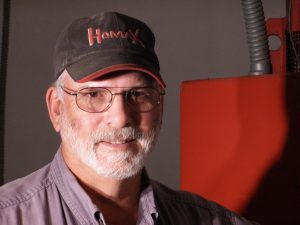 At the Buffalo facility, nearly 50 gallons of water per second have blasted down a pipeline and into the Pelton turbine since going online in 1998, churning out enough juice to power about 150 homes in the regional grid. Electricity is sold to Rocky Mountain Power, and since the turbine was built to last 100 years, the city stands to profit on its long-term investment. But the Buffalo project never would have come to be without a loan from the Wyoming Water Development Commission. Even small projects like this one cost hundreds of thousands of dollars to build and take years to pay off. The state can play a role in incentivizing this clean energy source by pulling together funds from a variety of sources, including state, federal, and private, among others.

For ideas on how to promote hydropower development, Wyoming might look to its southern neighbor, Colorado, where a hydropower movement is gaining speed. The US Department of Agriculture’s Natural Resources Conservation Service (NRCS) recently awarded a $1.5 million grant to the state to help fund small-scale hydro projects on ranches and farms to address water quantity, water quality, and energy resource concerns.

An additional $1.5 million came from the state and a host of partners, including American Rivers, Hydro Research Foundation, The Nature Conservancy, and Rocky Mountain Farmers Union as well as a number of Colorado energy, water conservation, rural electric, and hydro boards and associations. 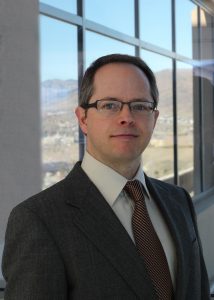 “Since Colorado enacted the citizen-led Renewable Energy Standard in 2004, the state has been very progressive in promoting renewable energy projects,” says Sam Anderson, Colorado Department of Agriculture energy specialist. He is overseeing the $3 million in grants that will help fund about 30 hydro-mechanical and hydro-electric irrigation systems in the state over the next three years. Colorado’s Renewable Energy Standard, the first voter-led initiative of its kind in the nation, requires investor-owned utilities (currently Xcel Energy and Black Hills Energy) to generate 30 percent of their electricity from renewable energy by 2020, including 3 percent from small-scale energy resources such as hydro, solar, and wind. The 22 rural electric cooperatives, meanwhile, must generate 20 percent of their electricity from renewables by 2020.

In addition to the Renewable Energy Standard, concerns about flood irrigation are also motivating the push for hydro in the state. “We use the hydro power as an incentive to encourage farmers and ranchers to engage in more efficient irrigation practices,” Anderson says. Converting from flood irrigation to center pivots saves water and reduces leaching of salts and selenium into waterways. Grants pay about 70 percent of the total project costs on farms and ranches, while ag producers fund the rest. Among those jumping on board is Susan Raymond, who operates a farm and veterinary practice in west-central Colorado near the small mountainous community of Hotchkiss.

Raymond was awarded grants from NRCS and the Regional Conservation Partnership Program to help install a hydro-electrical system and two center pivots, which collectively replaced labor-intensive flood irrigation and are helping her to grow better crops with less water. Produced electricity not only runs the pivots, but also her veterinary facilities, and any surplus goes into the power grid.

Colorado is playing a central role nationally in advancing small and micro hydropower, Anderson says. Working with NRCS and other partners, the state is developing an innovative program, and there is tremendous potential in other states to develop hydropower as well.

“Wyoming has great renewable energy resources, including hydropower, and the state can put that to work for the betterment of the people and the environment. It just takes a local champion to get that going,” says Milt Geiger, who served for six years as energy coordinator for University of Wyoming Extension and the UW School of Energy Resources. In 2016 he took a new job as the first alternative energy administrator for Poudre Valley REA, a non-profit rural electric association based in Fort Collins, Colorado.

During his time in the Cowboy State, Geiger co-authored the Wyoming Small Hydropower Handbook and hit the state’s highways to promote the publication and meet with citizens interested in small-scale hydro development, including those who operate farms, ranches, and irrigation districts.

The handbook states that hydroelectric installations are the most common and often least expensive sources of renewable electricity in the United States today. That’s appealing in a time when interest in low-carbon-emissions energy is escalating. But sizeable hydropower plants—notably those in dams backing up large rivers—come with their share of environmental problems and associated opponents. That’s why Geiger and his co-authors wanted to share information about small-scale hydro, which can be built into existing small dams or other infrastructure associated with irrigation districts. If designed properly, such projects can protect surrounding ecological values such as river flows, water quality, and fish and wildlife habitat.

One of Geiger’s co-authors, Skylor Wade, works for the Cheyenne engineering firm Wenck and Associates, which recently designed a new hydroelectric facility to run the city’s Sherard Water Treatment Plant. Construction of the 700-kilowatt unit begins in early 2017, and the plant is expected to be online in 2018. “I think there is a tremendous amount of potential for small-scale hydro in the state, but it will take support from a lot of people, including legislators and the Wyoming Public Service Commission,” Wade emphasizes.

Back at the Buffalo plant—where the thick, heavily reinforced concrete floor vibrates under Les Hook’s boots as water roars into the Pelton turbine—talk turns from pounds per square inch and kilowatt hours to the attitudes of people and our energy future.

“Yes, I definitely believe in promoting green energy,” emphasizes the public works director. “But it’s going to take action by legislators, public service commissioners, and utilities, to name a few. If a movement gets going, I believe renewable energy in our state, hydro included, will begin to fly.”

Robert Waggener is a Laramie, Wyoming-based editor, writer, and photographer focusing on agriculture, natural resources, and science in Wyoming and the West.