“I’ve learned to tune out the incessant alarm calls of prairie dogs when I work,” says recent University of Wyoming graduate Lauren Connell. “It’s that or go crazy.” For the past three summers, Lauren has been measuring rangeland vegetation throughout the Thunder Basin National Grassland to understand how disturbances like prairie dogs and wildfires affect livestock forage and wildlife habitat, two main priorities for ranchers and public land managers in this region.

The Thunder Basin National Grassland in northeast Wyoming supports a variety of land uses from energy development to livestock grazing, and wildlife species such as greater sage-grouse, mountain plover, and black-tailed prairie dogs.

Poised on the transitional zone or “ecotone” between the Great Plains and sagebrush steppe, Thunder Basin boasts characteristics and wildlife of both a grassland and a shrubland. In this unique landscape, beef cattle and sheep graze alongside prairie dogs, native ungulates, and birds like greater sage-grouse, burrowing owls, mountain plovers, and raptors. The secret of this diversity lies in its location. The landscape receives extra precipitation from the Great Plains to the east, but supports shrubs normally found in the high desert to the west. This unusual mix of temperature and precipitation means much of our knowledge gained through research and management in the Western Great Plains or high desert may not apply here. For example, models created to predict the behavior and effects of wildfire in the sagebrush steppe don’t work well in this ecotone. As such, managers and researchers are forced to rethink how these paradigms and approaches will apply to this unique landscape.

An additional management challenge in Thunder Basin is the mosaic pattern of public and private land ownership. Following the Dust Bowl of the 1930s, a federal land buy-back program resulted in public land interspersed among private holdings, often within the same pasture. In addition to ranching and wildlife, Thunder Basin also contains significant energy development, including the world’s largest surface coal mine. Although land ownership is mixed in Thunder Basin, wild animals don’t care about human boundaries, so managing these resources requires a joint effort by stakeholders working on both public and private lands. 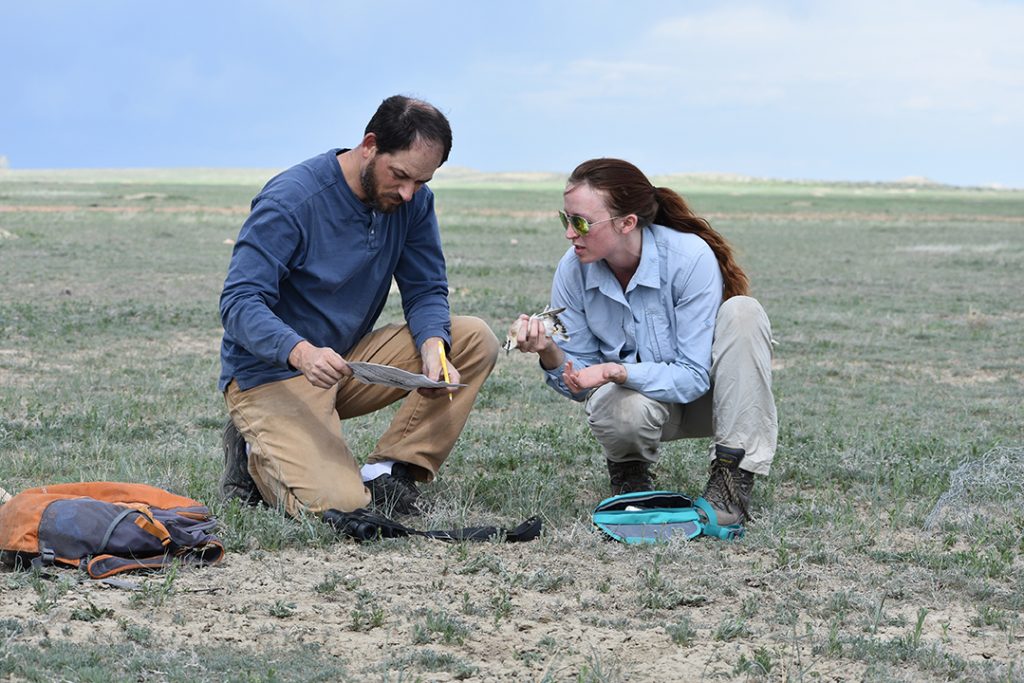 Courtney Duchardt (right) works with USDA Agricultural Research Service ecologist David Augustine to study how birds use habitat in the Thunder Basin National Grassland for her PhD in ecology from the University of Wyoming.

A non-profit group of 39 local ranchers, landowners, and energy representatives is rising to those challenges. The Thunder Basin Grassland Prairie Ecosystem Association (TBGPEA—read “tuh-BUG-Pea”), led by Executive Director David Pellatz, partners with other non-profit organizations and local, state, and federal government entities to promote conservation and sustainability on working ranches. In the Thunder Basin National Grassland, TBGPEA works alongside the US Forest Service and other partners to help manage these working lands for humans and wildlife, creating management plans that balance diverse interests like energy development, ranching, and wildlife conservation. After almost 20 years of sharing fences and working together, TBGPEA and the US Forest Service agree: sound, locally based science is needed for the management of this vast region of mixed ownership, colliding ecosystems, and different land uses.

That’s why TBGPEA led the effort to collaborate with scientists from the Agricultural Research Service (the research arm of the US Department of Agriculture) and the University of Wyoming Agricultural Experiment Station. The collaboration among TBGPEA, the Forest Service, and these two research institutions led to the creation of the Thunder Basin Research Initiative in 2014. The Research Initiative is a collaborative process—ranchers and land managers work with researchers to identify challenging management questions, generate research programs, and obtain funding to answer these questions. For example, how much forage grows during years of high, low, or average rainfall, and will there be enough for both livestock and native grazers? Does livestock grazing expose bird nests to predators? Conversely, is cattle and prairie dog grazing needed to ensure adequate nesting habitat for birds that require short grass? The Research Initiative helps answer these and other questions with rigorous science. In 2015, two University of Wyoming graduate students, Courtney Duchardt and Lauren Connell, joined in this effort. 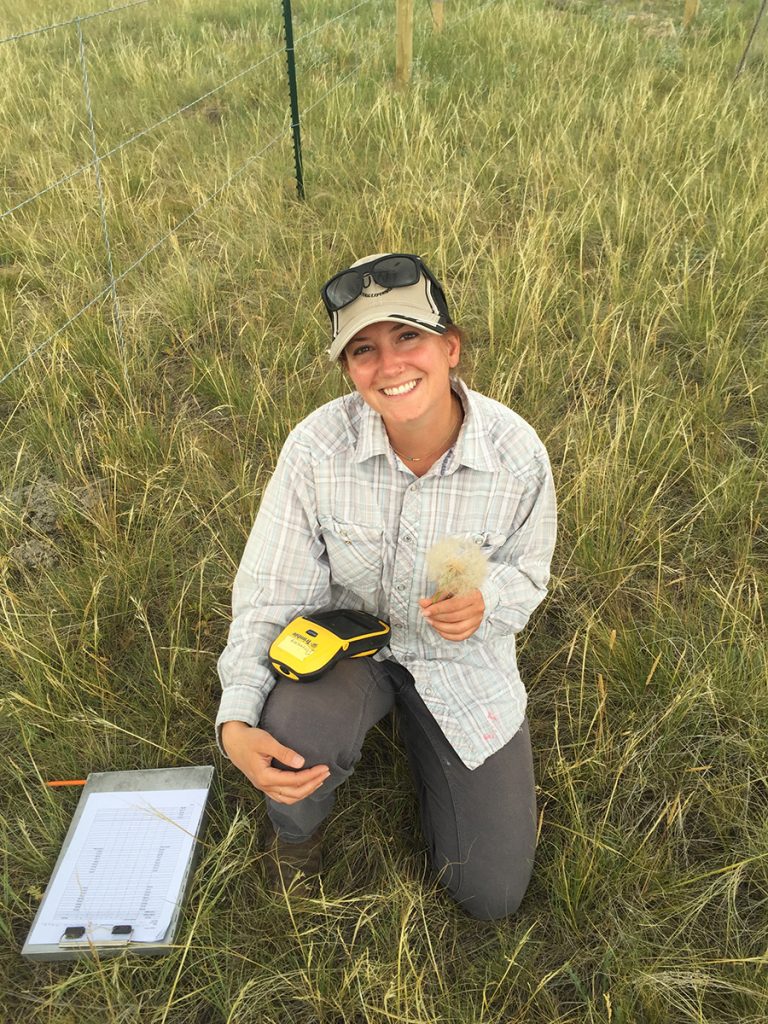 Lauren Connell researched how disturbances like grazing and wildfire interact to affect plant communities and forage production in the Thunder Basin National Grassland for her recent master’s of science in rangeland ecology and watershed management from the University of Wyoming.

Courtney’s research focuses on bird species of conservation concern whose populations are declining throughout North America from habitat loss or changing land use. Thunder Basin is a boon for conservationists because it provides habitat for both grassland and sagebrush birds—two bird guilds for the price of one. But more habitat for grassland birds means less for sagebrush birds, so the Thunder Basin Research Initiative wanted to know how much habitat each bird guild needs to persist in this landscape.

One species of conservation concern is the mountain plover, a bird that requires a lot of bare ground for nesting. In Thunder Basin, the mountain plover benefits from prairie dogs, which create islands of short grass and bare ground in a sea of taller grasses and sagebrush. But not every wildlife species benefits from prairie dog disturbance. The greater sage-grouse, for example, requires expansive sagebrush for winter forage and brood rearing, which is generally absent on prairie dog colonies. Courtney has been monitoring the bird community in Thunder Basin for the past four years to better understand how many prairie dogs are enough for the mountain plover, and how many are too many for the sage-grouse.  “It’s really about striking a balance between the needs of these very different wildlife species,” Courtney explains, “and at a larger scale, balancing the needs of wildlife management and other stakeholders in the landscape to maintain this biodiverse region for future generations.”

Although prairie dogs are crucial in creating mountain plover habitat, they’re a concern for ranchers. Cattle can have a hard time accessing enough grass, and thus gaining weight, when they share pastures with prairie dogs. Local stakeholders asked the Thunder Basin Research Initiative, when it comes to prairie dogs and livestock, is there enough grass to go around? That’s where Lauren’s research comes in. She studied how prairie dogs, fires, and grazing animals influence both wildlife habitat and livestock forage. She found these disturbances sometimes alter vegetation communities in surprising ways in Thunder Basin. For example, Lauren expected herbaceous vegetation like grasses and forbs to flourish without livestock grazing. Instead, she was surprised to learn the height and density of herbaceous vegetation was very similar between un-grazed areas and those grazed by livestock at light-to-moderate stocking rates. She also confirmed that while fires effectively eliminate shrubs like sagebrush, they don’t reduce overall plant cover because herbaceous vegetation can recover rapidly following fire. Another interesting finding: although prairie dogs can reduce the amount of grass on their colonies, the remaining grass contained more nutritional benefits than grass found outside of prairie dog colonies. “Most people don’t realize grass on prairie dog colonies can be more nutritious for grazing animals but for livestock the benefits aren’t always enough to compensate for the reduction of grass,” Lauren explains. 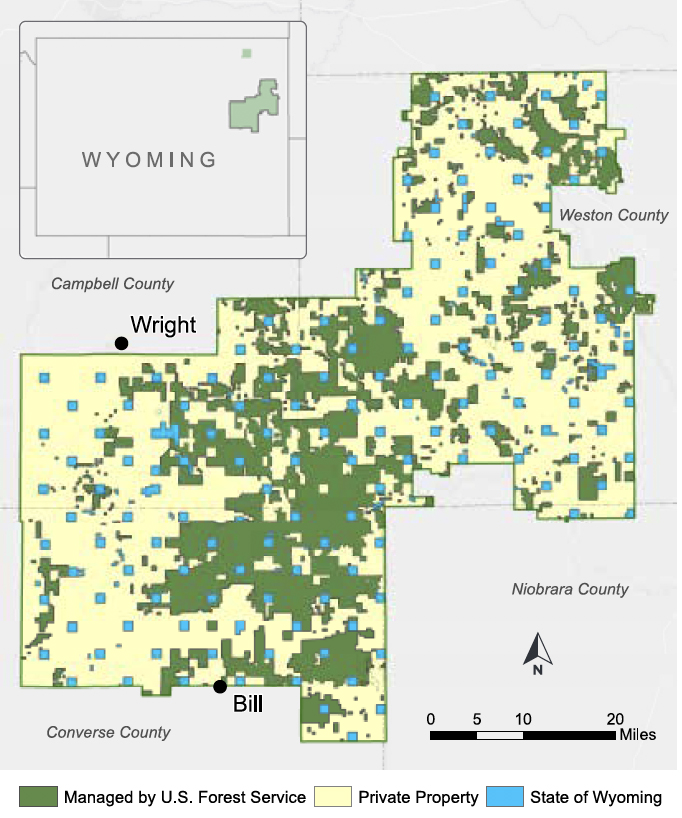 So, what does this all mean? A mosaic of habitats in Thunder Basin, including areas with and without prairie dogs, may give cattle the flexibility to graze high-quality grass on prairie dog colonies when it’s available, then move off-colony when they want to find more grass. Such a mosaic is necessary for the birds too, since species like the greater sage-grouse need extensive areas of sagebrush, whereas mountain plovers need bare ground. These results are clarifying the best ways to balance the needs of ranchers and wildlife in this system.

Just as the landscape is dynamic, the Thunder Basin Research Initiative has grown and changed over its first four years. Sharing fences in Thunder Basin is one of its greatest strengths—by communicating across the boundaries of background and land ownership, ranchers, managers, and researchers can really get at the heart of these issues. As part of this dynamic community, they’re constantly benefitting from seeing the grassland from a different perspective. This helps the team to hone in on particularly challenging and rewarding research questions. Although it might be easier to work in a less complicated system, they like the messiness; in this ecotone, there’s always something new to learn.

The Surprising Story of Cheatgrass in the Thunder Basin

In the sagebrush-steppe of the Great Basin, which lies 400 miles southwest of Thunder Basin, catastrophic wildfires are becoming more commonplace. In this region, fire promotes cheatgrass and cheatgrass, in turn, promotes fire, creating a “positive feedback loop” and leading to more frequent and hotter-burning wildfires. Under these conditions, cheatgrass can outcompete native vegetation by capitalizing on resources in a recently burned area—to the detriment of native plants. Even worse, cheatgrass makes an excellent fuel source for new fires, which reduce habitat for sagebrush-dependent wildlife like the greater sage-grouse. Cheatgrass is a short-lived forage resource for livestock and wildlife, and contributes to poor rangeland quality.

In response to questions posed by the Research Initiative, Lauren Porensky and Dana Blumenthal at the USDA-Agricultural Research Service began to investigate whether this cycle occurs in the same way in Thunder Basin. They compared cheatgrass density inside wildfire areas (burned 2–26 years ago) to nearby, paired locations that were unburned. Their study found that wildfires do not promote cheatgrass in Thunder Basin. In this ecotone, summertime precipitation helps native vegetation fight back against cheatgrass. Armed with this new information, managers can now focus their resources on other ecosystem threats. These findings are just one example of how collaboration within the Thunder Basin Research Initiative can shed new light on decades-old management challenges.

By Lauren Connell and Courtney Duchardt

Courtney Duchardt is in her fourth year of her ecology PhD at the University of Wyoming working under Professor Jeff Beck and David Augustine of the USDA-ARS. Lauren Connell is a private lands wildlife biologist for Bird Conservancy of the Rockies in partnership with the Natural Resources Conservation Service in Gillette, Wyoming. Lauren earned her master’s degree from UW in 2018 under Professor Derek Scasta and Lauren Porensky of the USDA-ARS.