Bullies on the Range

On a summer day in 2011, biologist Neil Perry was checking on prairie dogs he had translocated to a remote canyon in Mesa Verde, National Park, not far from the Four Corners region. At the base of the canyon was a spring, lifeblood to critters in this arid place. As an elk hunter, he took a minute to watch a half dozen elk single-file it toward the water. Just then, a large white stallion and his band of horses, “busted in and chased the elk up the hill,” Perry recalls. It was the same horse that had charged and chased him off the site the week previous. After that incident he thought, “Man, these guys can be pretty mean.” Now it was the elk’s turn to flee. The standoff lasted for the remaining hours that Perry finished his fieldwork—the horses guarded the spring while the elk watched from the hillside above, blocked from accessing the water. 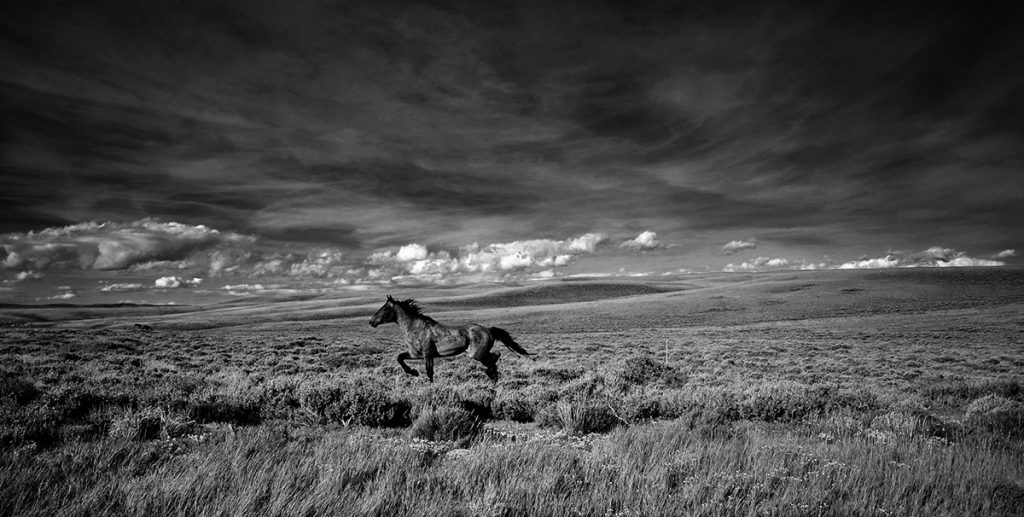 The next year, Perry mounted camera traps at the spring to see if horse bullying was a fluke or something more. The 100,000-plus digital photos of the spring showed elk and a few mule deer, but mostly wild horses—lots of horses. As he flipped through the sequences, the same story would emerge and repeat: as elk approached the spring, more often than not, horses ran them off. Out of 51 “interaction events” between horses and elk, only one brave (or very thirsty) cow elk and two rutting bulls made it past the horses. And because the horses tended to lollygag at the spring, elk and deer had few opportunities to visit the spring without encountering them. For all but horses, the spring may as well have been dry.

Elk probably arrived in Mesa Verde within the last 50 years, but mule deer were there long before horses, says Perry. Without a historical record, he can only speculate about what those interactions cumulatively mean: “There are a lot of deer in that canyon, but there aren’t as many as there should be. Horses have probably been excluding deer for decades.”

This same scene is playing out across the West, probably even right now as you read this. Wild horses are blocking other ungulates from accessing the water sources they need to survive in arid climes. Perry’s findings, published as a note in the journal Southwestern Naturalist in 2015, confirmed an earlier study showing that desert bighorn sheep in southern California bug out when horses arrive at a watering hole. Same too in the Great Basin of western Utah and in Nevada, where separate studies showed that mule deer and pronghorn visited water sources less often when horses were around. While Perry documented direct aggression, each of these studies found that just the presence of the socially dominant horses was enough to repel animals from watering holes and cause them to spend more time being vigilant. The authors of the Nevada study speculated that all that energy spent eyeing horses while not eating and drinking was enough to reduce the health and fitness of pronghorn there.

Horses outcompeting other ungulates for water adds to another problem in arid climates and drought years. Biologists and range managers have long suspected, and recent research confirms, that wild horses also compete with livestock and other ungulates, especially elk, for food. Their diets overlap and horses are voracious eaters. Competition from horses for food and water is a one-two punch for native ungulates in the arid West. 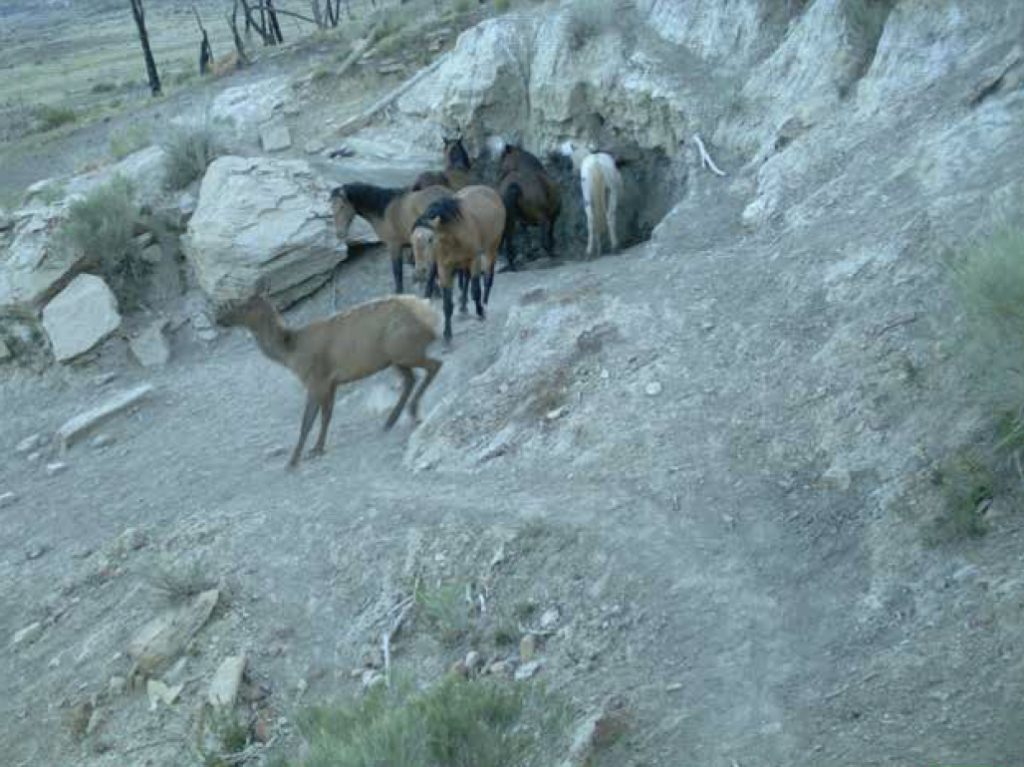 Camera trap photo showing wild horses chasing an elk away from the spring.

To some, what to make of this horse-wildlife competition for scarce resources depends on whether horses are native to the western landscape. A couple of small prehistoric horse species did roam North America during the Pleistocene some 14,000 years ago, together with camels and saber-toothed cats, before they all went extinct here. But, “at the time when horses did evolve here naturally, they were in a different ecology, a different suite of predators, and we don’t have that now,” says Perry.

Today’s US wild horse population grew from domesticated horses that got away from Spanish conquistadors in the 1500s, and later, from the US Cavalry. Federally protected wild horse herds continue to mix with escaped ranch horses and those from tribal lands. All horses we think of as “wild” today are in fact descended from a domesticated variety that likely evolved somewhere else besides North America. To biologists, wild horses are feral.

To the public, the native-feral distinction is less clear and perhaps less important. What matters is that wild horses are protected by the 1971 Wild and Free-Roaming Horses and Burros Act, which codified the growing public perception of horses as “living symbols of the historic and pioneer spirit of the West” and “an integral part of the natural system of the public lands.” The Act, passed in response to public outrage over wild horse management that included mass round-ups, aerial gunning, slaughter programs, and even poisoning of water sources on public land, called for the US Forest Service and Bureau of Land Management to manage and protect wild horses from killing or harassment where they were found roaming at the time the act was passed. The 1971 act allowed for removal or destruction of old, sick, or unadoptable horses, and even healthy horses if range conditions deteriorate. But Congress, responding to public pressure, has so far nixed the killing of healthy wild horses through riders on annual appropriations bills.

Thanks to federal protection and the absence of many natural predators, the wild horse population near Mesa Verde and in many places in the western US, has exploded. As of March 2018, the Bureau of Land Management estimated the wild horse population at 67,000 West-wide. Horses are famously difficult to count. But if the estimates are close, that’s over three times what BLM deems an Appropriate Management Level—the number of horses and burros “that can thrive in balance with other public land resources and uses,” including domestic livestock grazing and wildlife objectives. With an average annual population growth rate of 20 percent per year, herd sizes can double every four to five years if unmanaged.

The sheer number of wild horses competing for limited range resources means that they often compete against one another too. After his initial study, Perry left his cameras at the spring. During a dry year, the photos again revealed a struggle as horses prevented other horses, mostly the youngest and the oldest of the band, from getting to the shrinking spring. “I watched that stallion—who had been a really strong, powerful animal—when the water got so depleted, just wither down to almost nothing,” Perry remembers. “I thought that he was going to die.” He didn’t, but three or four other horses in the stallion’s band did. Their bodies joined the dozen or so horse skeletons that have come to encircle the spring through the generations. His observation was not an isolated one. In 2018, tribal officials reported that 191 horses were found dead, stuck in a drying-up stock pond on Navajo land in Arizona. Such gruesome scenes may grow with the expanding horse population.

What’s a range manager to do as horses proliferate and compete with each other and other species for scarce water? Perry says they can fence out horses from artificial wildlife watering holes called “guzzlers,” still allowing access by native ungulates. But that’s a short-term, small-scale fix for a problem that will only continue to grow.

Angela Yemma, a range conservationist who worked near Navajo Dam, New Mexico, is studying range conditions in light of a wild horse population that’s over five times the local population objective. Yemma agrees that reducing conflicts with wild horses requires something bigger. “I think the only way to manage for it is to get the numbers appropriate on the range to try to reduce some of that competition.” 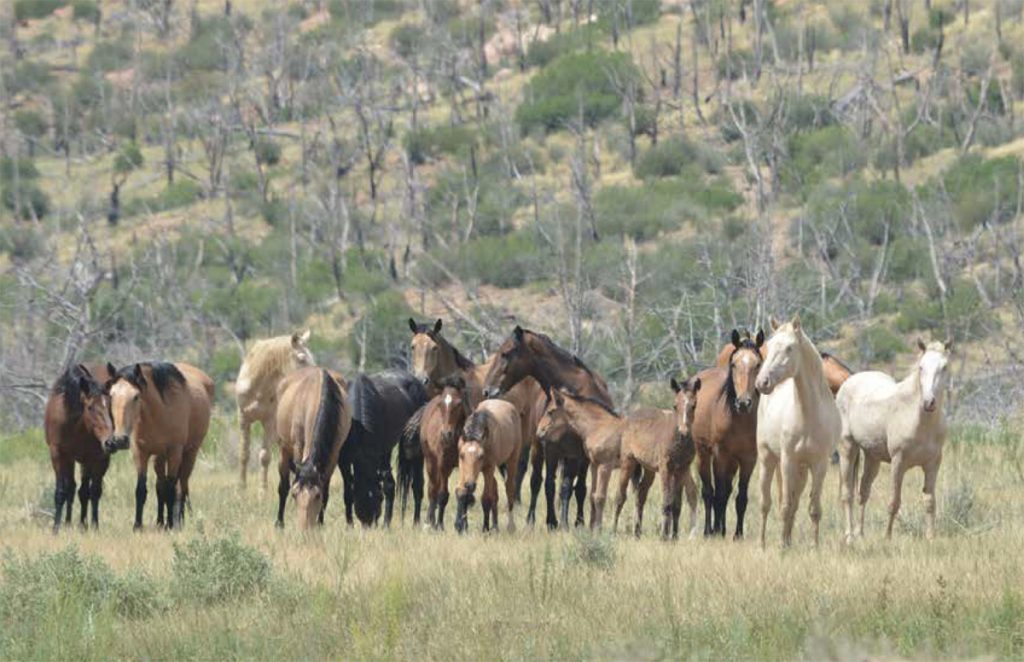 Deciding on appropriate horse numbers and how to get there is another story. With euthanasia effectively off the table, BLM gathers and pastures excess horses, although facilities are almost maxed out. Limited birth control and adoption of some horses account for the remainder of BLM’s wild horse management—not nearly enough to stabilize the population. The Wild and Free-Roaming Horses and Burros Act calls for federally designated wild horse population levels to be managed “to achieve and maintain a thriving natural ecological balance on the public lands.” The notion of “balance,” difficult to measure and now mostly abandoned by ecologists in favor of dynamic models, is a challenge to achieve when managing for multiple uses and without significant natural predation to regulate populations.

“The trial has been done for the last 30 years,” says Perry. “We are incapable of managing that in an ‘ecologically balanced’ way … We need to change that.”

Frustratingly, a 2013 National Academy of Science report found that current management strategies are probably increasing the horse population growth rate by reducing density-dependent factors that would otherwise slow growth. That is, removing some horses improves conditions for remaining horses, allowing them to survive and reproduce even better. And yet, that same National Academy study says that “the consequences of simply letting horse populations … expand to the level of ‘self-limitation’—bringing suffering and death due to disease, dehydration, and starvation accompanied by degradation of the land—are also unacceptable.” Added to the unacceptable consequences, an ever-expanding horse population means that other wildlife species lose out as they compete unsuccessfully against horses.

Wild horses are not allowed within national parks like Mesa Verde. And yet, there they were at Perry’s spring in a remote canyon of the park. It’s not clear how they got there—Perry says they probably walked through a broken fence adjacent to the neighboring Ute tribal land. Park staff set about trapping the horses and, through a cooperative agreement with a local horse advocacy group, began moving them to a nearby ranch. But pressure from national horse advocacy groups forced park management to reconsider and trapping efforts were suspended. Now horse removal is in the cards again following a recently signed Environmental Assessment to remove horses from all of Mesa Verde, nearly six years after the park started the process.

“It’s a big policy step for one of the agencies to make that happen,” said Perry. If Mesa Verde is any indication, similar responses in other places with wild horses will be slow and contentious. Scientific evidence that wild horses are outgunning other wildlife is clear, but management solutions that also account for the public’s love of horses are much less so.

Nicole Korfanta directs the University of Wyoming Ruckelshaus Institute of Environment and Natural Resources and is an editor for Western Confluence.