Several states have implemented Renewable Portfolio Standards in an effort to cut greenhouse gas emissions from the electricity sector. An RPS sets a percentage of the overall power consumed in a state that must come from renewable sources by a certain year. For example, New Mexico’s RPS is for 20 percent renewable energy from utilities by 2020 and Montana has already achieved its RPS of 15 percent renewable energy from utilities by 2015. Some states like Colorado have different standards for utilities, municipalities, and electricity cooperatives (30 percent, 10 percent, and 20 percent by 2020 respectively). Hawaii has the most aggressive RPS at 100 percent by 2045. As of 2016, 29 states, three territories, and Washington, DC, had RPSs. 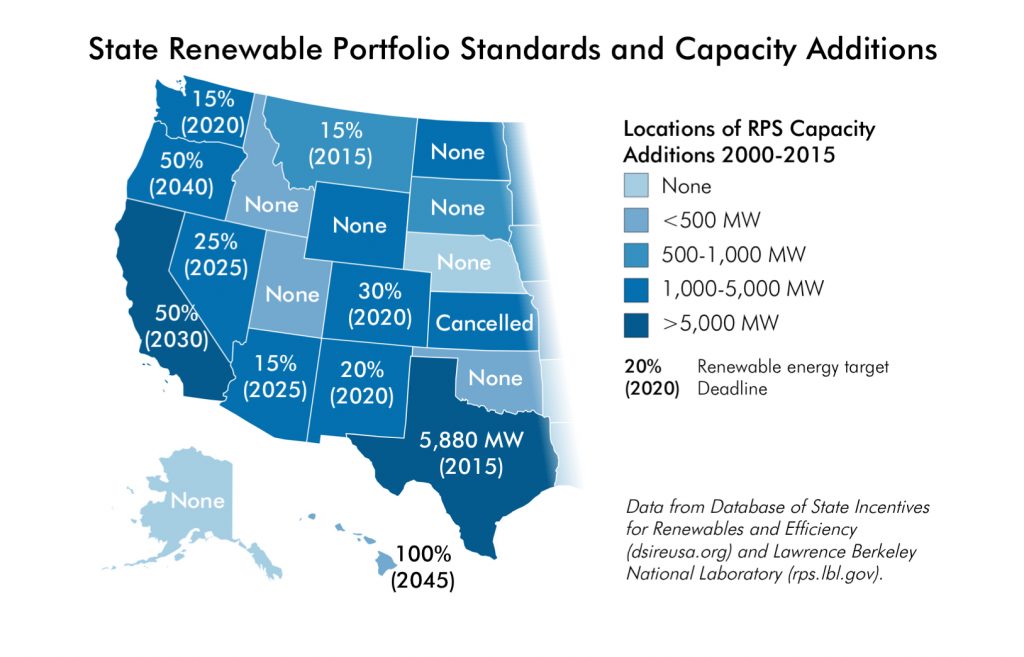 Though Wyoming does not have a Renewable Portfolio Standard of its own, since 2000 the state has added more than 1,000 megawatts of renewable energy capacity that help other states meet their RPSs.

The goal is to replace high-carbon-emitting electricity generation such as coal-fired power with cleaner energy sources, especially wind and solar. States enforce RPSs in different ways. In some states, if a utility doesn’t sell enough qualifying renewable energy to meet the RPS’s target, it pays a fine relative to the number of megawatts by which it fell short.

So how well do they work? Economists and policy analysts have determined that RPSs do result in replacing greenhouse-gas-emitting power generation with cleaner sources. About 60 percent of the 100 gigawatts of new non-hydro renewable energy generation capacity that has come online since 2000 fulfills RPS obligations. In 2013, renewable energy sources under RPSs reduced greenhouse gas emissions by an estimated 59 million metric tons of carbon dioxide equivalent, according to the National Renewable Energy Lab and Berkeley National Laboratory.

While RPSs do effectively clean up power generation, it doesn’t come for free. The Berkeley Lab estimates that in 2014, RPS compliance cost $2.6 billion above what energy costs would have been without the renewable requirements. That sounds like a lot, but it averaged to less than 2 percent of electricity customers’ bills.

States adjust their RPSs for many reasons: to improve how they operate, increase the future renewable targets, require more or less of certain kinds of renewable energy, or to respond to changing politics. For example, in 2015 the California legislature upped the state’s renewable target from 33 percent by 2020 to 50 percent by 2030. States can also repeal their RPSs. Kansas demoted its RPS to a voluntary goal after its legislature flipped from mostly democrats to majority republicans in 2015. (Oddly, Kansas had already surpassed the amount of renewable energy required by its RPS, so repealing the law didn’t change the state’s energy trajectory.)

Wyoming does not have an RPS, but because it exports so much energy, other states’ RPSs influence Wyoming’s energy portfolio. Wyoming already generates more than a gigawatt (1,000 megawatts) of wind energy that helps states to the south and west meet their RPSs. As states like California and Colorado strive to achieve the escalating targets of their ambitious RPSs while meeting their citizens’ growing energy demands, they may look to Wyoming’s wind as a source of clean electricity. But that will require overcoming barriers such as national and state politics and the huge cost and general unpopularity of interstate transmission lines.

By Lawrence Wolfe and Emilene Ostlind