Released to the Wild

Stepping through the tall grass, a family made their way to the edge of Kelly Warm Spring, a geothermal spring with a temperature that hovers around 77 degrees Fahrenheit year-round, in Grand Teton National Park. A young child carefully held a small bucket containing his first pet: a goldfish. The family was moving and didn’t want to bring it with them. At the water’s edge, the boy knelt down and slowly dunked the container, letting the fish swim away. After a tearful wave goodbye, the family returned to their car and drove back to the highway, relieved they had found a place for the fish to live out its life. What they didn’t know was that they were breaking both Wyoming state law and National Park Service regulations and contributing to an invasive species catastrophe.

And they aren’t alone. According to Grand Teton National Park spokesperson Denise Germann, people have dumped aquarium fish in Kelly Warm Spring since the 1960s. The spring is so enticing because its warm temperature offers a better chance of survival than other waterways.

“The native species are pretty rare now in Kelly Warm Spring, and I think that’s direct and indirect competition and predation as well,” says Grand Teton National Park fisheries biologist Chad Whaley. “We also see a suite of pathogens and diseases that we wouldn’t typically see in Wyoming waters, and those are likely associated with the aquarium [fish].” 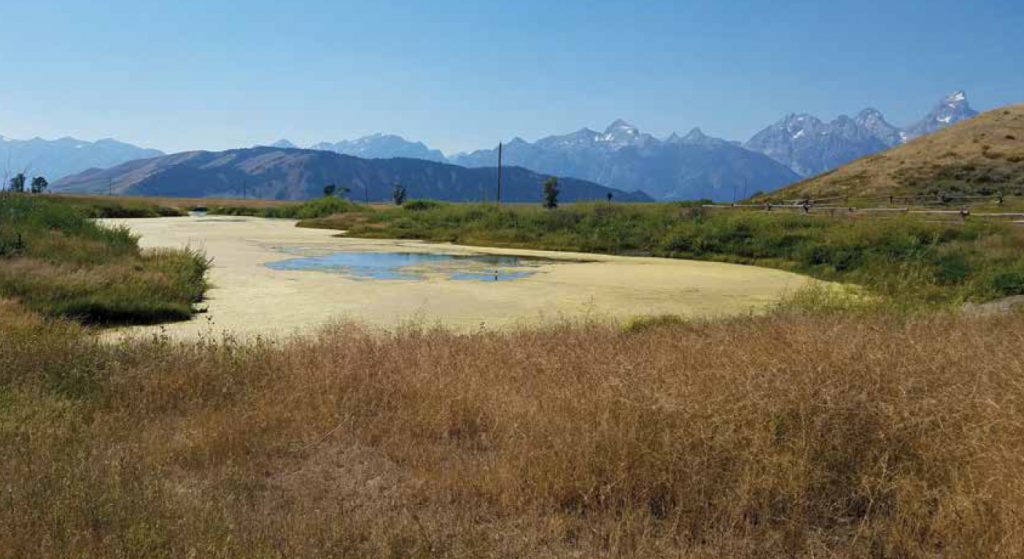 Kelly Warm Spring, on the eastern edge of Grand Teton National Park, is around 77 degrees Fahrenheit year round. For decades, people have released unwanted pet fish to the spring despite the fact releasing them is a Class B misdemeanor with penalties of up to $5,000 in fines and/or six months of jail time. (Photo courtesy Chad Whaley/Grand Teton National Park.)

When the family released their goldfish into the waters of Kelly Warm Spring, they weren’t thinking about how it could grow and outcompete native species, spread pathogens, or harm the ecosystem. They just wanted the fish to have a chance at survival. And they’re not the only ones to unleash an unwanted pet on an ecosystem. Exotic pets released into the wild are a concern throughout the country and beyond.

“I would say it’s a monstrous problem really,” says Leah Elwell, executive director for the Invasive Species Action Network. “In this day of being able to purchase whatever you want online it can be really easy to buy whatever [pet] you’re interested in internationally.”

Elwell’s organization educates everyone from school kids to pet store owners about the importance of not releasing unwanted pets into the wild through the “Don’t Let It Loose” campaign. “Our mission is to promote behavior change that helps prevent the spread of invasive species,” Elwell says.

She says many people don’t know certain animals, such as bullfrogs, may be illegal to own, even though they are easy to obtain. And people don’t understand the threats those animals pose to native ecosystems.

With abandoned pets thriving in the warm waters of Kelly Warm Spring—despite the fact releasing them is a Class B misdemeanor with penalties of up to $5,000 in fines and/or six months of jail time—managers wanted to take action before these animals spread even further.

Outflows from Kelly Warm Spring are located within a mile of the Snake River. Introduced warm water species were already in nearby Ditch Creek, and managers wanted to make sure they wouldn’t continue to spread.

After analyzing options like trapping, netting, and electrofishing, the park selected a pesticide-based treatment. They opted for rotenone, a chemical widely used in fisheries work. After spending hundreds of hours preparing the site and clearing vegetation, they donned protective equipment and applied liquid and extended-release “sand balls” of the chemical in August 2018. They then spent days scooping dead fish from the water. Rotenone kills species that breathe through gills, and Whaley says they timed the treatment for when native amphibians wouldn’t have gills and for when Ditch Creek was dry.

“We want to make sure that we do everything right,” Whaley says.

While the treatment didn’t kill all the fish in the spring, it substantially reduced their numbers. “We brought the risk level associated with Kelly Warm Spring down quite a few notches,” Whaley says. The goal is to restore native species, but they may need to apply more rotenone or implement new strategies to eliminate the rest of the invasive fish first. Restocking native fish may also be a possibility down the line if they don’t naturally recolonize from nearby waters.

While releasing a small fish into the wild may seem like an inconsequential act, the case of Kelly Warm Spring shows how introducing even seemingly harmless pets can create damage that ripples throughout the ecosystem and causes land managers to expend a tremendous amount of effort to restore native wildlife populations.

Pets released into the wild usually suffer and die as well as harm native ecosystems. The Invasive Species Action Network partners with wildlife agencies and pet stores to help people find alternatives to releasing pets into the wild.

Kristen Pope is a freelance writer and editor. She has written about white-nose syndrome in bats, tiny houses, conservation easements, and more for Western Confluence. Learn more about her work at kepope.com.