What it means to have protected public lands in your backyard

Waves lap the shoreline. An endless stellar canopy shimmers in the ink-colored sky. Smoky fragrance drifts from a campfire, and 20 middle school students sit around the dancing flames. Some toast marshmallows or write and draw in journals. Ten others wash, dry, and pack away dishes from the evening meal. A few adults mingle, voices low. The night is quiet except for the whispered words and the rattling pans for those camping along the Upper Missouri River in north-central Montana. 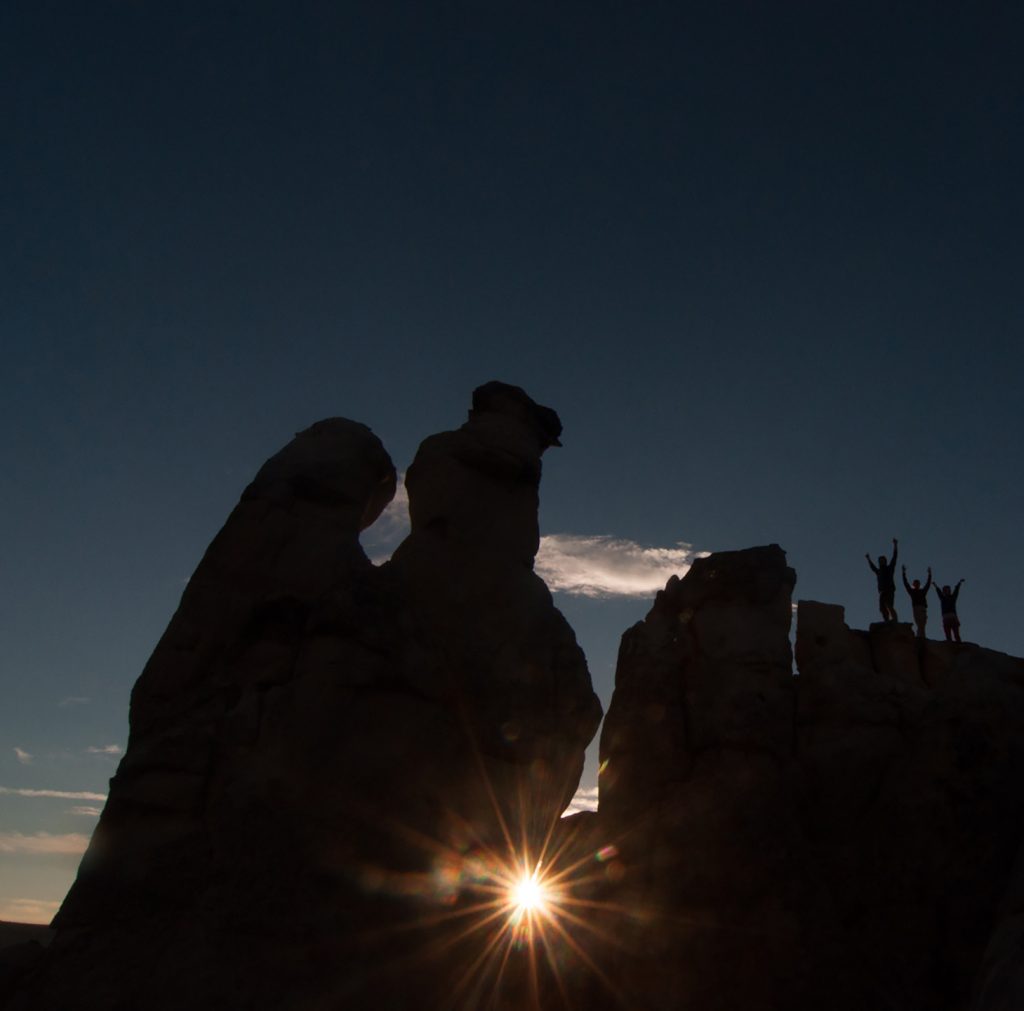 For more than a decade, students and educators from Fort Benton and Highwood Schools have explored the wide river and the surrounding isolated Upper Missouri River Breaks National Monument. The expedition introduces youth to a natural national treasure—and much more.

“For many kids, it’s their first time camping, first time away from their parents, first time outside overnight,” said Connie Jacobs, former director of Fort Benton’s Upper Missouri River Breaks National Monument Interpretive Center, who implemented the program. “They learn a lot. Montana is a rural state, but many kids don’t have primitive outdoor experiences.”

Local teachers Renee McDonald and Laurie Baum partnered with Jacobs nearly a decade ago, taking their students into the national monument. Although Baum retired last year and Jacobs oversees a different center in another state, McDonald continues to take Fort Benton students on the Missouri and nearby Marias Rivers. Students experience hands-on learning in subjects like biology, geology, history, and math. They also learn how to set up tents, operate a canoe, cook over a campfire, and administer first aid.

“The students are amazed,” Baum said. “They like the experience of the river. They find it so peaceful, and they learn to respect and care for the land.”

“A lot of the kids are taken aback. This is in their own backyard and they’ve never been there. It’s a positive experience for us all,” said McDonald.

Such experiences and educational opportunities were threatened last year when the Trump administration considered rescinding several national monument designations including the Upper Missouri River Breaks National Monument. For some people, that review opened wounds from 20 years ago, while many other found solidarity in the common cause to keep the monument intact.

History of the Monument

In addition to outdoor recreation activities like canoeing, hunting, camping, fishing, and birdwatching, the Upper Missouri River Breaks National Monument is a portal into history. The region’s rugged landscape captivated the 1804–1806 Lewis and Clark expedition. “As we passed on it seemed as if those seens of visionary inchantment would never have an end,” Meriwether Lewis wrote in his journal on May 31, 1805. Native Americans used the area to hunt bison and other game, and the region served as refuge for the Nez Perce as they fled the US Army in 1877. Steamboats chugged upriver from growing cities like St. Louis into the frontier town of Fort Benton. Homesteaders attempted to etch out a living at the turn of the 20th century. American history, vast vistas, and diverse animal and plant life led the US Congress to protect a 149-mile stretch of the Upper Missouri River in 1976 with a wild and scenic designation. 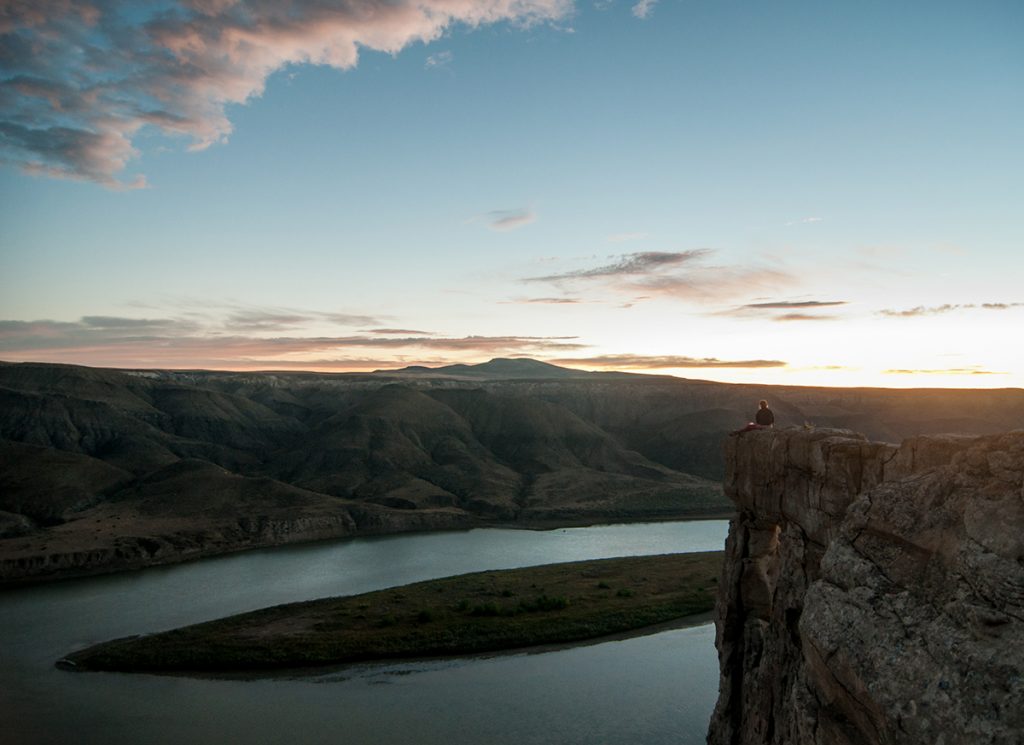 Daily, Hugo Turek experiences the enchantment of the Upper Missouri River Breaks about which Lewis wrote. His ranch lies next to the monument, and he’s floated the wild and scenic portion of the Missouri River. He’s also been on the front line of protecting the region. In 1999, Turek met then-Interior-Secretary Bruce Babbitt, who was considering placing the area under greater protection as a national monument. They floated the river with a contingency of reporters, and, at Babbitt’s request, Turek helped set up discussions in local communities regarding monument status.

“We held four public meetings: in Havre, Fort Benton, Lewistown, and Great Falls,” he said. “They were balanced between proponents and opponents. More than 450 people came to the meeting in Great Falls.”

Afterward, Turek and other members of the Central Montana Resource Advisory Council came up with a list of more than 25 items “everyone agreed on,” including monument land remaining open for grazing, hunting, and fishing.

“It was like a blueprint, but there were no boundary recommendations—we couldn’t agree on that,” Turek said.

The council’s list was sent to Washington, DC. Combined with Babbitt’s recommendation for area protection, in January 2000, President Bill Clinton designated nearly 378,000 acres of land as the Upper Missouri River Breaks National Monument under the auspices of the federal Bureau of Land Management. This move, done through the 1906 Antiquities Act, generated major controversy.

Reactions to the Monument Designation

Boundaries were a primary thorn. Within the monument’s borders are about 39,000 acres of state land and 80,000 acres of private land. Although the landowners “can do whatever they want on their private land,” according to Josh Chase, BLM’s acting monument manager, many private property owners and others were against the monument. During the Bush administration, when Montana was under a new governor, then-Montana-Congressman Dennis Rehberg introduced legislation to redraw the monument’s boundaries in order to exclude private and state lands. 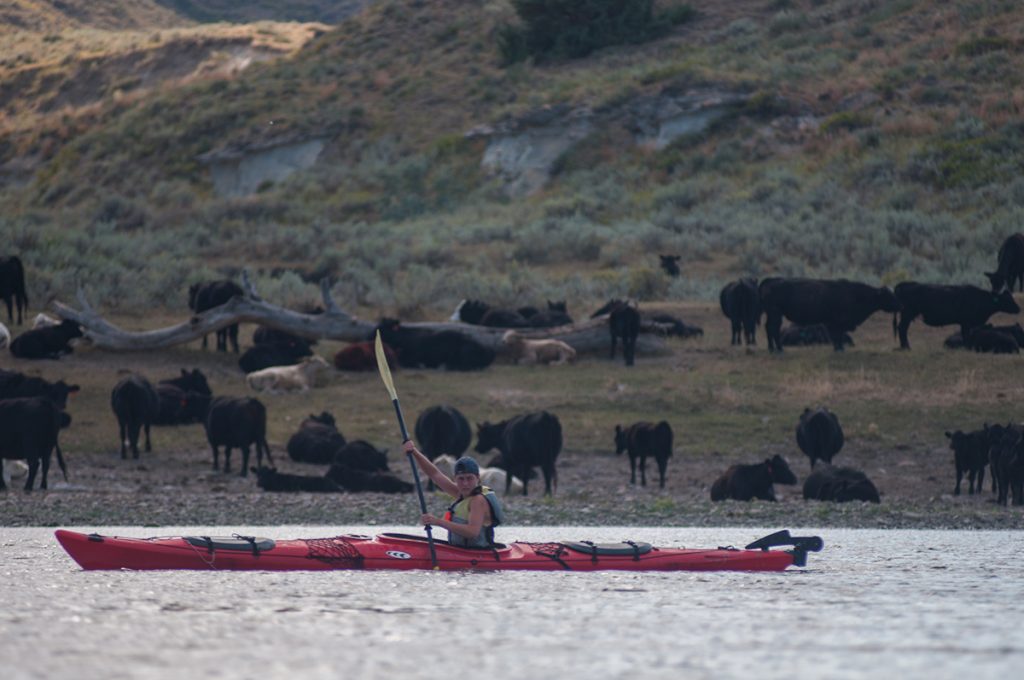 However, people had already started to accept and even support the monument. Those efforts to downsize it never got out of the House of Representatives, said Turek, who testified at committee hearings. Three committee members wrote that Rehberg’s bill, “is both bad and unworkable public policy that attempts to play on people’s fears rather than dealing with the facts and as such it should be rejected by the House.”

Meanwhile, a new recreation economy started to grow up around the monument. Nicole Fugere, owner of Adventure Bound Canoe and Shuttle Company in Fort Benton, began guiding people through the breaks along the Missouri River more than a decade ago. She’s owned the business for two years, and in a community of less than 1,500, employs 15 to 20 people each season. The business shuttles between 2,000 and 3,500 canoeists and guides on about 120 river trips annually.

“We have increased the number of clients [served] over time,” said Fugere. “People come for the Lewis and Clark experience, and they wouldn’t come if it wasn’t cared for, protected. The monument is huge for me.”

Having the river and the monument to which she transports and services outdoor recreationists adds not only to her coffers, but also to the tax base of the community and state. Several Montanans cited how visitation to the monument contributes to the local and state economy. “Outdoor recreation is a booming industry,” said Montana musician and rancher Rob Quist, “and public lands are an economic driver for our state.”

“People are curious to see the monument—it appeals to the outdoor recreationist,” said Gayle Fisher, executive director for central Montana’s tourism region. “The national status [of the monument] benefits communities, for it brings a little more traffic into the area. The river and the monument are part of the mix we use to market the region—it’s a tool in our toolbox.”

Research finds public lands, including national monuments, are good for business. According to a report issued last year by Headwaters Economics, a non-partisan research group in Bozeman, Montana, “national monuments are consistent with economic growth in adjacent local communities.” That includes the small towns around the Upper Missouri River Breaks.

“People value these lands out here,” Turek said. “I think the economic impact is yet to be realized.”

Despite many local attitudes about the monument shifting over the years from opposition and distrust of federal oversight to acceptance and support for increased revenues from tourism, in April 2017, President Trump and Secretary Zinke announced they would review national monuments and possibly rescind some, including the Upper Missouri River Breaks. Montanans and others spoke out in great numbers, some in favor of keeping the monument and others in favor of reducing the monument’s size or completely eliminating protection. Those desiring change included many area ranchers. 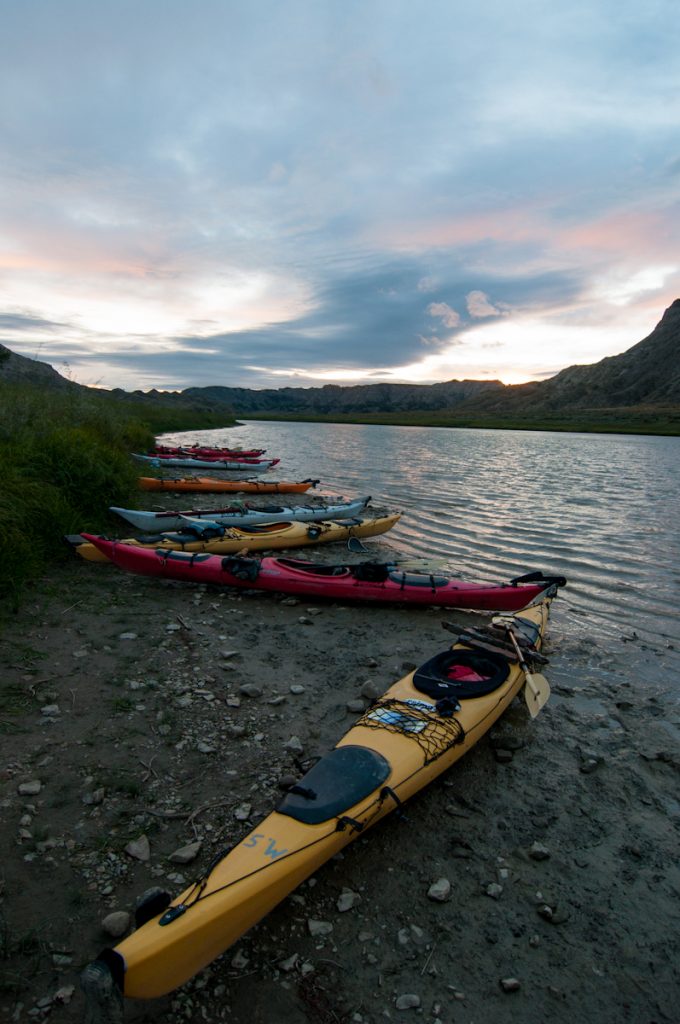 Citing his opinion about lack of public input during the initial designation process, area landowner and member of Missouri River Stewards Matt Knox told the Billings Gazette that he “would be in favor of overturning” the monument’s status.

Others sent letters expressing concerns. Last July, the Gazette excerpted a letter from rancher Laura Boyce, who has some family property within the the monument’s borders. “We would like to do some estate planning,” she wrote, “but are very limited out there, because who wants the half in the monument? What is the future there? Will we continue to be allowed to graze cattle?”

In response to the possibility of changes to the Upper Missouri River Breaks National Monument through the administration’s review, the non-profit Friends of the Missouri River Breaks, of which Turek is a board member, partnered with state and national organizations to encourage supporters and others to become involved in the monument status discussion.

“We had good collaboration,” said Tim Dwyer, executive director of the friends’ group. “Working with organizations like the Wilderness Society and the Wildlife Federation helped us reach more people—they have larger memberships. Montanans see a threat to public lands; public lands are a reason we live here. Several small business owners in Fort Benton also stepped up.”

One of those was Fugere.

“I could not imagine there not being a monument—it’s a huge part of history,” she said.

She became part of a movement called Hold Our Ground, a coalition of individuals and organizations who came together in response to the administration’s review of the Upper Missouri River Breaks National Monument. According to the organization’s website, 24,000 Montanans spoke in favor of continued protection.

“Montanans value their public lands, they truly do,” said Turek. “If we get rid of public lands, if there was no monument, the lands would be sold off to the highest bidder—they would be owned by very wealthy people. We’re creating less and less [public] land, and people want outdoor experiences.”

A survey released in June 2017 by Colorado College, Conservation in the West, showed 77 percent of Montana residents wanted to keep existing national monuments so designated; 16 percent wanted reduction or removal. The survey also noted 78 percent of Montanans considered themselves conservationists, up from 71 percent the year before.

More than 2.8 million comments were submitted during the national monument review in 2017, and, according to a report summary submitted to President Trump by Zinke, they “were overwhelmingly in favor of maintaining existing monuments …” In August 2017, a few weeks before announcing his controversial decision to downsize Bears Ears and Escalante National Monuments in Utah, Zinke recommended no changes be made to the Upper Missouri River Breaks National Monument. 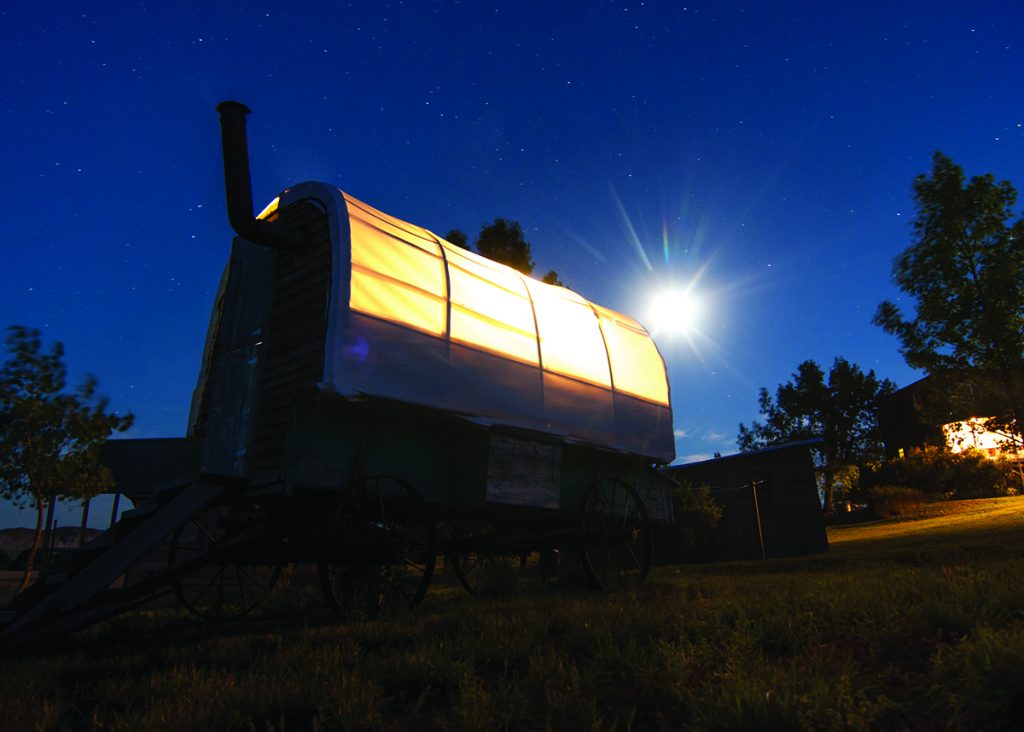 This remote region of Montana, where Quist says, “you’ll experience the least amount of civilization that you can find in the world,” for now, remains unchanged. Modern explorers generate revenue for local communities and discover the knowledge, solitude, and wonder that the 1805 expedition experienced.

“What many [students] told me afterwards, even after high school or college, was that being on the river was the best thing they’d ever done in school,” said Jacobs, who started the school river adventure. “Some I’ve met later in life have gone on to work in an outdoor setting.”

“The monument is a place for recreation, for learning,” Fort Benton educator McDonald said. “If it wasn’t a monument, we’d likely lose a lot of our history—the tepee rings, the trails, the homesteads. There’s so much history here—those stories are our stories.”

Gayle M. Irwin of Casper, Wyoming, regularly writes for Wyoming Rural Electric News and has contributed stories to the Casper Star-Tribune and the Chicken Soup for the Soul books. She has won awards from Wyoming Writers, Inc., the Wyoming Press Association, and 2016’s Writing Well creative writing contest. Visit her website at gaylemirwin.com.

Ben Johnson is a freelance photographer and environmental field instructor based in Montana.

Why We Have Federal Land