The need to value and safeguard wildlife movements

Roads may well be humankind’s greatest source of metaphors, inspiration for a plethora of phrases about journeys and all the bumps, bends, twists, and turns along them. Even the word metaphor here is a play on words, because a metaphor means, literally, a transportation. Roads are, indeed, our greatest source of transportation, conduits for the movement of goods, the physical movement of people and culture, and the journeys within our souls they so often bring about. 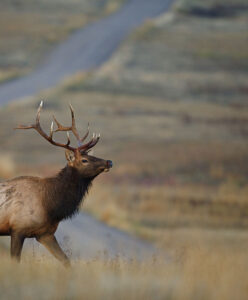 Now let’s imagine that other species have roads just as important to them as ours are to us, only we can’t easily see them. Let’s re-visualize a map of the West that has not just our human interstates and highways, but also the scores of regular animal movement paths overlapping and intersecting them. Recent studies using GPS collars show us the deer and pronghorn highways that entire herds use to migrate from their winter to summer ranges and back. Their highways intersect ours and continue on through landscapes most of us will never see, because our human roads do not go there. We may not see these paths, but for deer they are just as vital as our roads are to us.

When we visualize it this way, it begs us to ask: how do we manage the flow of traffic at these junctions? This is the question we need to answer in order to address the problem of roads for animals and people.

Roads have two major impacts on wildlife. The first is easy to see and understand: vehicles hit wildlife on roads, killing them, injuring people, and damaging vehicles. We have estimates of the costs of these collisions: $50 million per year in Wyoming, alone.

Yet, it is the second problem, more difficult to measure and see, that is a greater concern for our wildlife: roads create a connection challenge for entire networks of animal paths. In a study I recently completed, I found that mule deer need at least 30 seconds between consecutive vehicles to get across highways. When there are too many vehicles, too close together, deer give up their attempts to cross. That means that for many hours of the day, on many roads in the West, animals cannot get to their habitat on the other side. Major highways can even be a total barrier; we see this in animal movement paths, as hundred-mile journeys abruptly dead end when they reach the most heavily trafficked roads.

Here in Wyoming, we are starting to make some progress on the problem. Scientists are working extensively to map big game movement routes and share the stories of the animals that traverse them. This storytelling makes animals’ journeys, with all their twists and bends in the road (real or metaphoric), relatable to people. We have mapped the areas with high numbers of wildlife-vehicle collisions and used economic analyses to show the monetary benefits of fixing those spots with wildlife crossing structures. We have built a number of these highway under- and overpasses and seen that they dramatically reduce collisions, allow animals to move back and forth across roads, and save more money—in terms of collisions avoided—than they cost to build. We have used the science and stories of migration and collisions to bring together diverse stakeholders, leading to a statewide strategy on roads and wildlife and millions of dollars in new funding to ensure safer passages.

Yet, there is more we could do. We place high cultural and economic value on keeping abundant herds of big game in the West, but we lack a way to express the value of the free movement that sustains these herds—or, conversely, what we lose in animals and dollars by cutting out their movements with obstructions like roads. Putting numbers to these ideas is difficult and even controversial, but it could open opportunities to further justify the benefits of crossing structures, or other fixes, to humans and wildlife. My hunch is that the economic value of sustaining migrations is substantial, and that defining this value would increase the range of funding options and tools for keeping these wildlife highways open.

Even without hard quantification, we could do a better job of valuing animal movements and the role they play in keeping our wildlife healthy and abundant. Imagine our human world without roads and travel. The pandemic has given us a glimpse of this, and we don’t like it. Our lives are less rich—literally and metaphorically—without our roads. The same can be said for our wildlife. Let’s ensure we can all continue our journeys, on all of our roads.

Corinna Riginos is the Director of Science for The Nature Conservancy in Wyoming and an adjunct associate professor at the University of Wyoming. She has been studying roads and wildlife and working with agencies on this issue since 2012.